PKK leaders urge supporters to vote for HDP in Turkey's elections, refuse to lay down arms 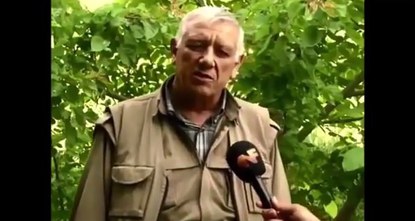 
As links between the PKK terror organization and pro-Kurdish Peoples' Democratic Party (HDP) are becoming more debated in Turkey's political agenda, a recent video which went viral on social media circles made these ties more obsolete.

Cemil Bayık, one of the top three leaders of the PKK, asked their supporters to vote for HDP, associating voting for HDP with supporting the PKK.

"I know that they will accomplish their goals and fulfill their responsibilities as they did in the past. They will vote for the HDP to fulfil their responsibilities, just as they supported our struggle which has come to this day because of their backing. Because their efforts are starting to pay off," Bayık said.

Although political freedoms of the pro-Kurdish movements, which were banned and pressured in the past, are larger than ever with HDP receiving 13 percent of the votes countrywide and allocating 80 seats in the Parliament in the June 7 parliamentary elections, the terror organization is more staunchly using arms and an armed struggle as a means to keep its influence.

Duran Kalkan, one of the senior commanders of the PKK, states that the terror organization (generalizing with all Kurds) won't lay down arms prior to the June 7 elections.

HDP's election success, described by many as a victory, hoped to end PKK terror and open a new page to democratically resolve Turkey's Kurdish question. Despite this, the PKK stepped up its armed activities since the June 7 elections. From July 7 to September 13, 118 Turkish security forces were killed from PKK attacks, mostly conducted through hit-and-run tactics, ambushes and landmines. 27 civilians lost their lives, most living in Turkey's eastern and southeastern regions, whom were either killed by direct fire from PKK militants or got caught between crossfire. 120 terrorists were neutralized in skirmishes, while 40 were captured.

Counterterrorism units have also launched raids against the Revolutionary People's Liberation Party-Front (DHKP-C) and the urban youth branch of the PKK, the Patriotic Revolutionist Youth Movement (YDG-H). Out of the 2,330 detained suspects, 622 were arrested.

The PKK is designated as a terrorist organization by the U.S., EU, and NATO.