Locals furious with PKK terror in aftermath of Cizre curfew 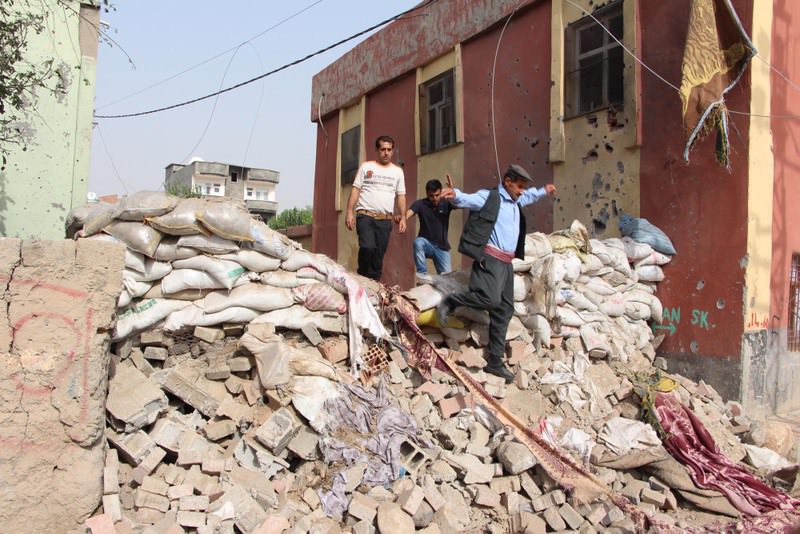 Reports on the Cizre curfew, which was lifted on Saturday, said that 32 terrorists were killed, 150 apartments were raided and the police seized 800 kilograms of explosives. Locals criticize the PKK for inflicting damage in the region against the interests of Kurds

As daily life in Cizre in Şırnak province gradually returns to normal after an eight-day curfew imposed with the aim of tackling the PKK terrorist organization's urban presence, locals voice their frustration with PKK terror in the aftermath of reports on the operations. According to reports prepared by the Interior Ministry, 32 terrorists were killed and 10 detained, two of who were top-level PKK members. In addition, police special operation teams destroyed every barricade set up by the PKK's urban youth branch, the Patriotic Revolutionary Youth Movement (YDG-H), to help senior PKK members flee to the mountains. Police also raided over 150 apartments used as PKK ammunition depots.

In the operations, 20 explosive devices were found and destroyed along with 800 kilograms of explosives. Many rifles and homemade explosives were also seized. Even though social media and some media outlets were on the go with disinformation on infrastructure deficiencies as well as the lack of food, the Interior Ministry report said that the PKK targeted transformers and bakeries to slow down the police and put locals in a tough spot.

As for cutting off the food supply, the ministry said flour stores were seized by the PKK, which only allowed them to distribute to bakeries close to them. Over the last week, there was much speculation about the reasons for the water, electricity and Internet problems in the town. However, reportedly, 70 percent of the district cannot receive services after the HPG broke lines while digging ditches.

Overwhelmed and buffeted by the PKK, which aimed to turn Cizre into a new Kobani, locals in the district related their exasperation with the continuous PKK attacks that make life unbearable. Speaking to state-run Anadolu Agency (AA), İlyas Gözüngü made his dissatisfaction with the terrorists digging ditches in the streets known, saying: "Incidents occurred because they dug ditches. All of the streets were dug up. We don't assent to it. We are against it. They shot everyone who stepped outside. "Speaking in Kurdish, Osman Aydın slammed the political wing of the terrorist organization for not really caring about Kurds, saying, "Those who claim to be our defenders muddy the water making money on us."

Aydın went on to criticize the PKK for impoverishing people in the region and intending to set Turks and Kurds against each other. "God does not say in the Quran that you are Turkish, you are Kurdish and you are Arab, but that Muslims are brothers and sisters. They left us with no food, water, electricity and a miserable situation. People's homes are wretched. Is it how to be a Kurd? We don't want such Kurds. All we want is peace, unity and brotherhood."

Another Kurdish-speaking citizen in Cizre, Osman Kartal, said after the clashes: "We were very scared, owing to the clashes. Me and my children and grandchildren stayed in the basement of my three-story house."

Three children injured by PKK bombsTwo 9-year-old children, Tahsin Uray and Ramazan Şimşek, were injured on Saturday in the Kızıltepe district of Mardin province while trying to find out what was in a bag they found on the roof of their home. Uray lost his life the following day despite medical efforts.

Another incident took place in Cizre where the curfew was lifted on Saturday. Yusuf Şık, 12, lost his right hand after a hand-made PKK bomb he found on the street exploded. Şık was immediately taken to the hospital.
RELATED TOPICS