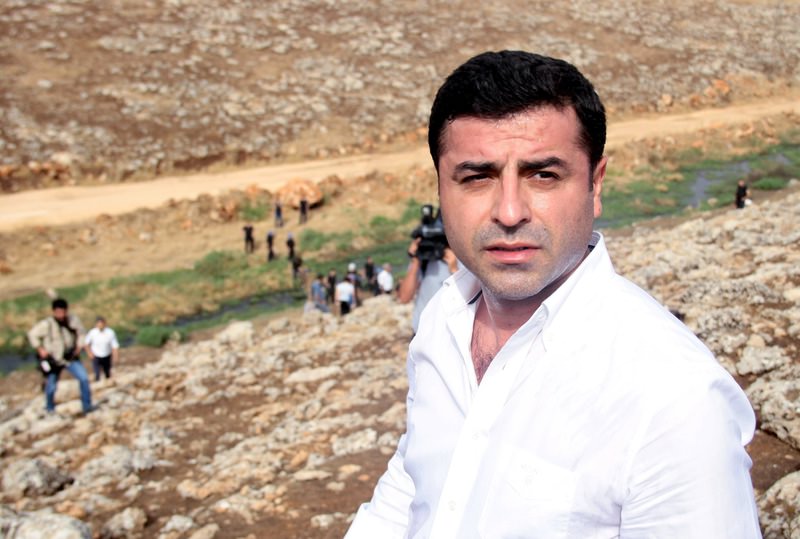 by Fatih Şemsettin Işık Sep 15, 2015 12:00 am
On Sunday pro-Kurdish Peoples' Democratic Party (HDP) Co-Chair Selahattin Demirtaş said: "What will you solve by bombing all the cities since just a couple of youngsters took up arms?" The next day in a speech in the Varto district of southeastern Muş province he said: "There is no need for arms."

He made a comment concerning PKK violence in Cizre on Sunday and the next day in Muş he said: "We do not suggest war and violence to Kurdish youth."

Several figures in reports from state officials say the PKK changed its strategy and escalated its violent activities in urban areas rather than rural ones.

The latest developments in Cizre, a town in the predominantly Kurdish province of Şırnak where the PKK has committed its deadliest attacks on security forces and civilians, revealed that it placed a so-called coordination quarter, its urban branch administration and regional command of its military wing, the People's Defense Forces (HPG), by taking advantage of the cease-fire during the reconciliation process, which started in 2012.

According to Interior Ministry reports on Cizre, 32 terrorists were killed and 10 detained, two of whom were top-level PKK members. In addition, police special operation teams destroyed every barricade set up by the PKK's urban youth branch, the Patriotic Revolutionary Youth Movement (YDG-H), to help senior PKK members flee to the mountains. Police also raided over 150 apartments suspected of being used as PKK ammunition depots.

Along with the critical position for the organizational structure, the town's population of 130,000 is young, which according to the Interior Ministry is also important for PKK recruitment, given that security units are after 280 PKK terrorists in Cizre, 200 of which are members of the YDG-H.

Despite the HDP's success in the June 7 elections, receiving 13 percent and 80 seats in Parliament, which is considered by many as a victory, raising hopes to end PKK terror and open a new page to democratically resolve Turkey's Kurdish question, could decrease due to the HDP hesitating to draw a clear line between itself and the PKK and abstaining to condemn it for its deadly attacks.

A recent video that went viral in social media circles made ties between the PKK and HDP more obsolete. Cemil Bayık, one of the PKK's three most senior leaders, asked supporters to vote for the HDP, associating voting for the HDP with supporting the PKK.

Cizre Mayor Leyla İmret, who has been alleged to have close ties to the PKK, was dismissed from office by the Interior Ministry on Friday for purportedly promoting terrorism and inciting people to an armed uprising against the state.

HDP Co-Chair Figen Yüksekdağ has been accused of making aggressive statements, supposedly legitimizing PKK terror. On Sept. 6, speaking before the HDP's Central Executive Board meeting, she said her party was ready for "resistance or elections," which attracted serious criticism for coming on the day the PKK killed 15 police officers in two separate attacks. She is has described the PKK in the past as a "national liberation movement" and that the group stands for "democracy and equality."

Formed in 1978, the PKK, which is designated as a terrorist organization by the U.S., EU, and NATO, has been fighting the Turkish government for an independent state until the early 2000s. The group then shifted its goal to autonomy in the predominately Kurdish regions of Turkey.
RELATED TOPICS