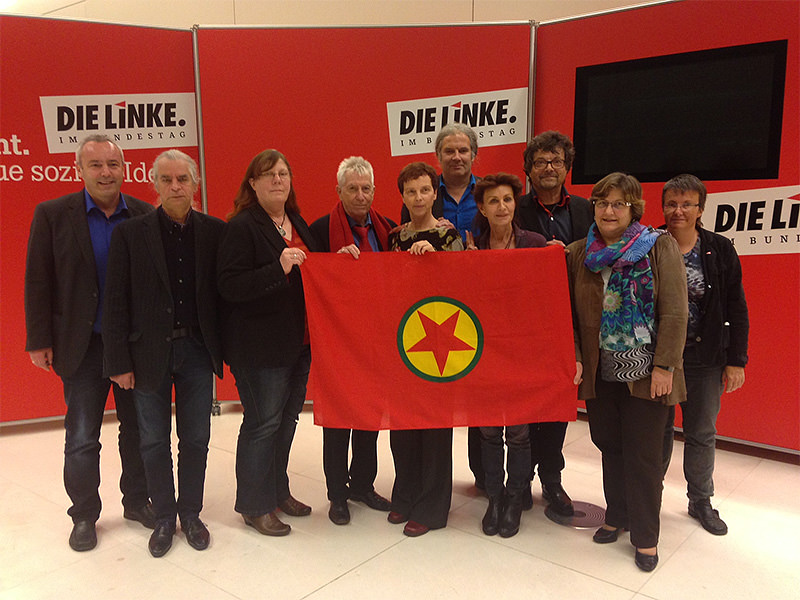 Several German parliamentarians show their support for Nicole Gohlke, who was stripped off her immunity after raising a PKK flag at a rally in Munich. (DHA Photo)
by daily sabah
Oct 05, 2015 12:00 am
German Left Party (Die Linke) parliamentarian Katrin Kunert allegedly leaked a classified document to media outlets close to the PKK. The document is believed to be a written reply from the German government to Kunert with information of her request about the Turkish government allegedly delivering arms to Syrian rebel groups, German daily Die Welt reported on Sunday.

An investigation initiated by the Berlin Public Prosecutor's Office reportedly found that a classified government document was leaked from a secretly protected cell in the Bundestag. Only lawmakers and their vetted assistants are allowed into the cell and go through documents and it is illegal to copy documents or make contents publicly known. However, the document is believed to have been photocopied or photographed.

In August 2015, Özgür Politika, a newspaper known to have close ties with the PKK, and Evrensel, published a photo of the classified document in two articles. In light of the articles, the Berlin Public Prosecutor's Office launched an investigation into the incident. The prime suspect in the investigation is Kunert herself.

Even though Kunert on May 18, 2015, asked for an inquiry into the allegation that the Turkish government delivers arms to some groups in northern Syria, she dismissed the claims and said she has not seen the document and does not have any contact with media outlets that published the document. 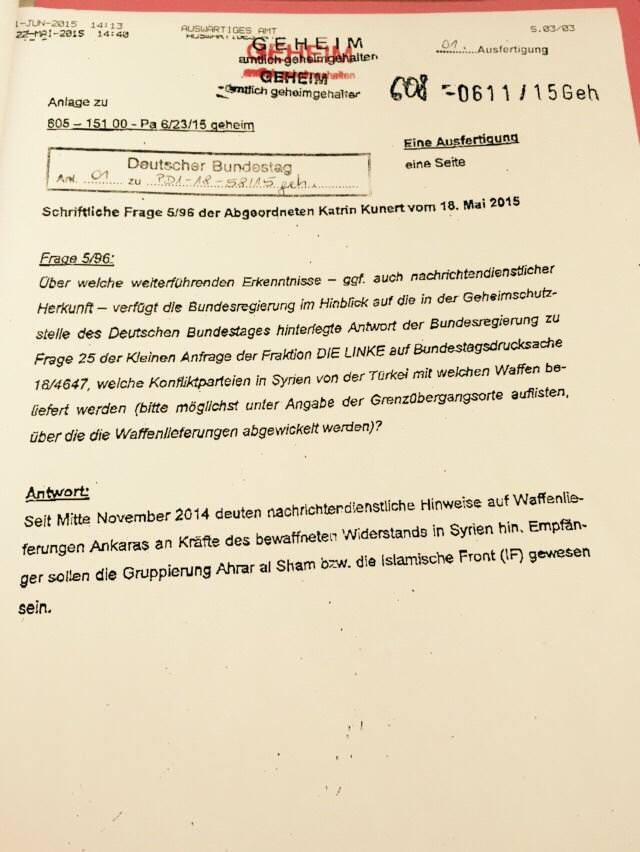 While the Left Party sparked controversy over alleged cooperation with the PKK, previous examples point to a longstanding history between Left Party parliamentarians and the PKK. For instance, German deputy Nicole Gohlke from the Left Party attended a PKK rally on Oct. 18, 2014, where she gave a speech in front of a banner of imprisoned PKK leader Abdullah Öcalan and raised the PKK flag. After the Munich prosecutor launched an investigation, Gohlke's immunity was lifted and she was fined 1,000 euros.

Moreover, fellow parliamentarians showed up in the Bundestag holding a PKK flag to support Gohlke. The party and parliamentarians came under fire as the PKK is recognized as a terrorist organization not only by Germany but also the U.S., the EU, NATO and other international organizations.

Another Left Party parliamentarian, Jan van Aken, drew heavy criticism from many after he showed a PKK flag during one of his speeches in the Bundestag. Presenting the flag of a terrorist organization in the Bundestag was interpreted by many as showing explicit support.

Speaking to Daily Sabah on the issue, Enes Bayraklı, a foreign affairs specialist at the Foundation for Political, Economic and Social Research (SETA) and an academic at Istanbul's Turkish-German University, said the Left Party feels close to the PKK on the grounds of ideological similarities.

Bayraklı called the party's remarks and actions obvious and said, "It's all there to be seen, but leaking a document of the German government constitutes a crime. This proves how close they feel to the PKK, so close that they leak a classified document."

When asked about the role that the PKK's status plays, Bayraklı said, "The Left Party and Greens have extraordinary sympathy for the PKK and they don't bother to hide it. While speculating that Ankara helps ISIS [the Islamic State of Iraq and al-Sham], they show huge support for the PKK. It's a contradiction."

Commenting on the impact of the PKK support on Turkish-German relations, Bayraklı said, "It's one of the things that hurts relations greatly. It causes tensions to escalate and the relations do not benefit a bit from this."