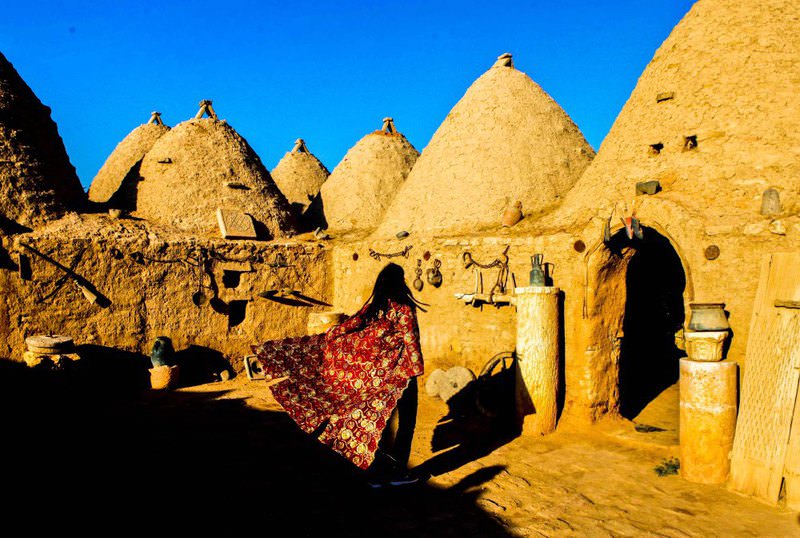 A journalist from Ankara is observing a historical house in the Harran district of u015eanlu0131urfa. The site, which used to receive around 1,000 visitors a day last year, is now only seeing several tourists a week.
by Mehmet Solmaz
Oct 21, 2015 12:00 am

Since the PKK broke the almost three-year cease-fire in July, the southeastern regions of the country have seen a dramatic decrease in the number of tourists and investors it attracted while enjoying the peaceful atmosphere during the reconciliation process with the PKK

The terrorist assaults in Turkey's eastern and southeastern regions not only claim the lives of military officers and civilians, but also jeopardize the daily lives of the people in the region where Kurds are the majority. Terrorist attacks such as bombing bridges, attacking construction sites of dams and industrial areas and setting fire to construction equipment and vehicles are disrupting many projects planned to employ thousands of people. Some of these projects have come to a halt due to the assaults.

The main goal of the Southeastern Anatolia Project (GAP) is to improve levels of income and living standards of the people in the region by making use of the region's resources. It also aims to contribute to the economic development and social stability targets of the nation by increasing productivity and employment opportunities in rural areas. Aside from economic development, social and cultural activities also contribute to the recognition and improvement of the region. The GAP administration head, Sadrettin Karahocagil, spoke with Daily Sabah about long- and short-term influences of terrorist assaults on people in the region.

DS: Can you briefly describe GAP?

As is already known, GAP is the most significant regional development program that has been making a real contribution to the country's economy with the welfare it has created. It is a project that supports local enterprises and has many assertive and achievable targets with broad horizons.

GAP's targets , which bear vital importance both for the region and the country's development, include building 22 dams, 19 hydroelectric plants and irrigation networks, opening up a total of 1.8 million hectares of fields to irrigation, producing 27 billion kilowatt hours of hydroelectric energy annually.

DS: The peaceful and safe atmosphere provided by the reconciliation process paved the way for various economic and social developments that turned southeastern Anatolia into a center of attraction and many considerable innovations flourished in various areas. How do you evaluate the current picture?

Unfortunately, the restart of terrorist assaults aiming to disrupt peace and stability in the country has caused many fatalities and destruction started to be experienced again. We are currently losing many of our people and experiencing painful incidents. These assaults are giving the greatest harm to the people in the region as their economic conditions and businesses are also being damaged.

I regret to say that GAP investments have also been disrupted to a considerable extent by the economic and social damage and the security gap caused by terrorist assaults in the region. The construction of some dams and hydroelectric plants as part of the project has come to a halt due to assaults and sabotage.

Due to attacks on the Silvan Dam, which is still under construction on the Tigris River and planned to be the greatest irrigation dam after the Atatürk Dam as part of GAP initiatives, its construction could be barely maintained. However, about 318,000 people were planned to be employed as part of this dam project, which would change the fate of the region and decrease unemployment. Likewise, the completion of Ilısu Dam, which comprises the last phase of energy projects in the region, is also being hindered. Attacks targeting these projects, which are meant to give life to the region, undoubtedly target the welfare of the region, increase of employment and income levels and the future of our children.

DS: We cannot see tourism boom in the region as before any longer. Can you describe the current situation?

Firstly, the mobility on the border due to the conflict in Syria, and then the tension and insecurity caused by terrorist assaults have largely undermined tourism activities in the region, which enjoyed a great boom during the reconciliation process. During September and October, the months when GAP culture tours are in demand the most, reservations were canceled and hotels remained empty. All in all, the region has been negatively influenced in terms of economy.

But be sure that we are still determinedly maintaining our work without being demoralized despite the ongoing conflicts in the region. We think that peace and stability can be achieved through completing the development of the region with a feeling of solidarity and unity. For this reason, we continue our work without breaks as much as possible. We know that such devoted work is the best answer to terror.

I would like to underline that we are determined to increase GAP work in the region even more on the strong grounds provided by the investments we have made over the last decade when the atmosphere of peace and stability was ensured. Our targets include turning the region into one of the shining stars of the 21st century with new investments we have made, rendering our completed projects permanent, sustaining a peaceful atmosphere by increasing the level of welfare and solidifying feelings of brotherhood.