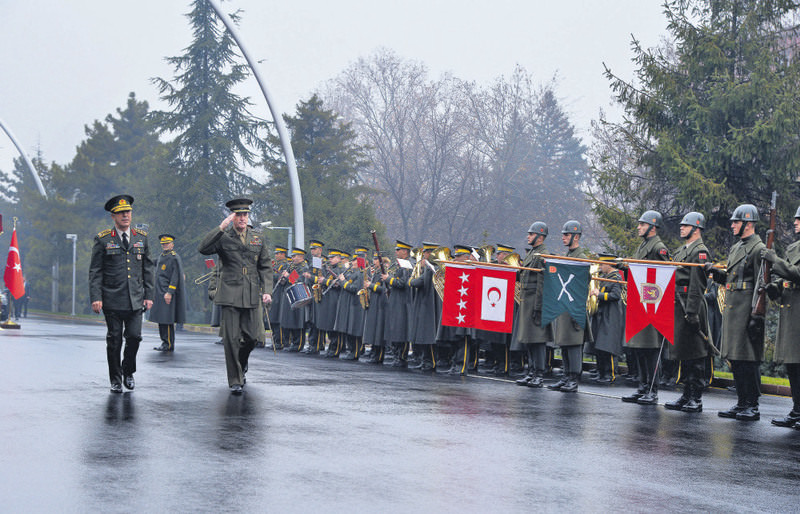 Chief of General Staff Gen. Hulusi Akar (L) and the chairman of the U.S. Joint Chiefs of Staff, Gen. Joseph Dunford, inspect a military honor guard in Ankara on Wednesday.
by Merve Aydoğan Jan 08, 2016 12:00 am

Top U.S. commander Gen. Dunford held a meeting with his Turkish counterpart Gen. Akar in Ankara and expressed support for Turkey over its concerns about the PKK affiliated PYD's plans to cross west of the Euphrates in Syria, which Ankara has called its redline

Chief of General Staff Gen. Hulusi Akar met with President Recep Tayyip Erdoğan on Thursday and briefed him on meetings held with the U.S. Chairman of the Joint Chiefs of Staff, Gen. Joseph F. Dunford. Dunford arrived in Ankara on Tuesday and held a series of official meetings on Wednesday, starting with Akar as well as several other top military officials at the General Staff and also met with Prime Minister Ahmet Davutoğlu. Sources indicated that Dunford expressed support for Ankara's stance against the PKK's Syrian affiliate Democratic Union Party's (PYD), which is attempting to establish control over the territory that lies between the northern Syrian towns of Azaz and Jarabulus, near the Turkish-Syrian border. Dunford's visit is highly significant in terms of timing and circumstance. In addition to an upcoming visit from U.S. Vice President Joe Biden, the recent developments throughout southeastern Turkey make Dunford's visit noteworthy. According to sources, Dunford has three major items on his agenda.

With Erdoğan, Davutoğlu and other government officials reiterating that Turkey will take all necessary actions to prevent the PYD from establishing power in the Azaz-Jarabulus vicinity, Dunford reaffirmed with Turkish officials that the U.S. sees the PYD as an affiliate of the PKK, which has been declared a terrorist organization by the U.S. Dunford further said that the U.S has no tolerance for any terrorist organization that attempts to establish power around the area of the Euphrates, with the U.S. government refusing to let the PYD form a fait accompli in the area. Sources further reported Dunford and Turkish officials have discussed the PYD's aims to modify the demographic structure of the region using the Syrian Democratic Force as their means, which includes Arabs, Turkmens and Assyrians. Dunford reportedly addressed Ankara's concerns regarding the possibility of a demographic shift being instigated by the PYD in Tal Abyad under the cloak of combating DAESH. Dunford reportedly agreed with his Turkish counterparts on the issue, noting that international coalition forces must coordinate efforts to prevent the scenario from occurring in the region.

In addition to the PYD presence and activity in the region, Turkish officials and Dunford addressed border security. Dunford said that 30,000 military officers will be inadequate for securing the new borders that are to be established. He also underlined that airstrikes are highly effective in targeting DAESH militants located near the Turkish border. During the meetings, Turkish officials once again emphasized the importance of tackling the source of the Syrian crisis – the regime of President Bashar Assad – and reiterated that there needs to be a resolution in Syria.
Last Update: Jan 08, 2016 2:29 pm
RELATED TOPICS