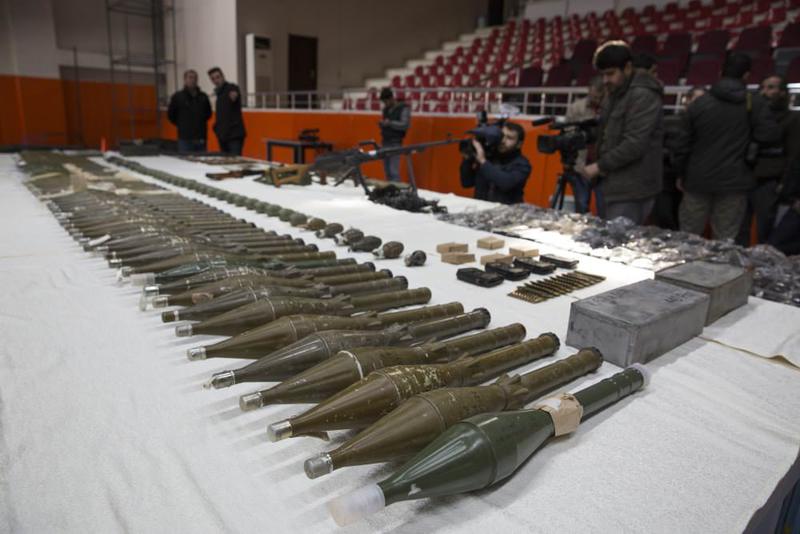 by daily sabah Jan 19, 2016 12:00 am
Weapons sent by the U.S. and European countries for use in the anti-DAESH fight, intended for the Syria-based Democratic Union Party (PYD), which is an affiliate of the terrorist PKK, have been passed onto PKK hands in Kobani and then brought into Turkey, a former militant of the PYD claimed on Monday. Speaking to Yılmaz Bilgen from Yeni Şafak daily, Omar Mamash, who fought in PYD ranks against DAESH for 11 months, said weapons including guns, missiles, ammunition and grenades were brought into Turkey or delivered to PKK headquarters in the Qandil Mountains in Northern Iraq.

Mamash indicated that the PYD had set border points for arms deliveries, saying, "The deliveries made from between the Aligör mountain located in Suruç [a district of in the Şanlıurfa province in southeastern Turkey] and Qamishlo region [in northern Syria], taking place between 3 a.m. and 5 a.m. During periods of increased border controls, PYD militants make deliveries to the Turkish side through tunnels."Mamash stated that Qandil makes decisions for the PYD and its commanders in Kobani and Tal Abyad, adding that thousands of militants who came from Turkey were trained in Kobani.

"We have trained more than 4,000 militants from the Revolutionary Peoples Liberation Party-Front [DHKP-C], the Marxist-Leninist Communist Party [MLKP] and the Communist Party of Turkey/Marxist Leninist [TKP/ML]. After 90 days of training, several militants go to battlefield, while some pass back into Turkey," he said.

The former PYD militant, who had fought in the ranks of Burkan al-Firat which works in tandem with the PYD, stressed that everything has changed after the seizure of Tal Abyad by the PYD in June 2014, and that he had personally witnessed dozens of robberies and families forced to migrate, aggressions against those who were ethnically Arabs and Turkmen, regardless to their indifference to DAESH policies.

Despite his leaving the PYD, Mamash said the PKK-affiliate organization issues a death warrant for all who quit and never tolerates dissent within the organization.

That the PKK and the PYD have symbiotic relations has been reported in Turkish media.

Photos released by Turkish General Staff on Jan. 4 show the PKK using guerrilla warfare strategies employed in the defense of Kobani against DAESH. According to reports in the Turkish media, the terrorists are drilling holes in walls through which they open fire on Turkish security forces. The same strategy was previously used by the PYD's fighting group, the People's Protection Unit (YPG), in Kobani. The PKK also sets houses on fire, builds barricades and digs trenches in the streets and uses buildings and houses to advantage by connecting the structures from the inside, employing guerrilla warfare tactics into urban areas.
RELATED TOPICS