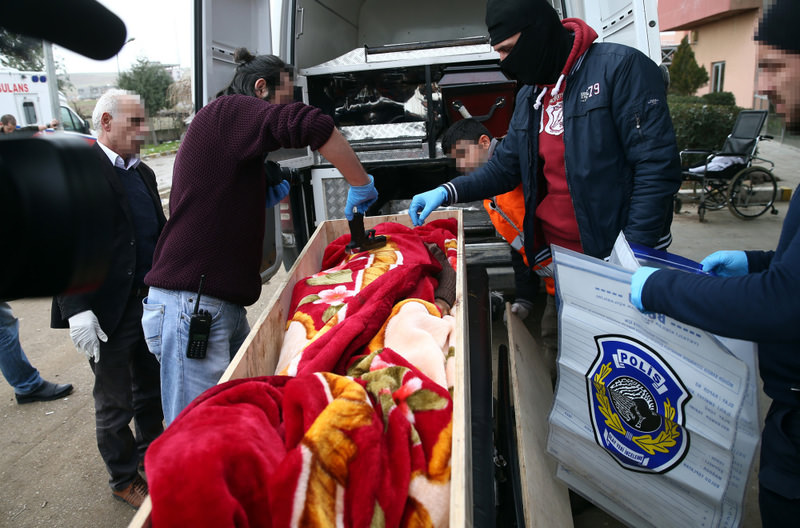 Security forces captured seven terrorists who were attempting to flee the Cizre district of Şırnak province in ambulances and funeral coaches. Nine terrorists were also killed in the operation. The incident sparked controversy since the PKK used ambulances and equipment belonging to the local municipality. Municipal vehicles were also used by the terrorist group to transport weapons and ammunition (L), which were seized and displayed by the security forces.

Some municipalities in the region have come under fire in the wake of operations that found heavy ammunition in municipal vehicles.

On Jan. 4, a local court sentenced Bekir Kaya, the former co-mayor of the eastern province of Van, along with 17 other people, to seven to 15 years in prison on charges of being members of the PKK. According to information received from the latest Central Executive Committee meeting of the ruling Justice and Development Party (AK Party), 18 DBP mayors and 48 DBP municipal council members have been arrested so far.

The PKK allegedly coerces mayors to meet its demands. One municipality in the southeastern province of Mardin received demands for diggers, which it did not provide, resulting in threats to Mayor Ahmet Türk for his refusal, with the PKK saying this policy damages no one other than the locals.

Meanwhile, an infirmary used by the PKK to treat their wounded was raided by security forces in the Cudi neighborhood in Cizre.

Four terrorists were also found buried in the backyard of a house raided by security forces.

As part of a new governmental plan to build 15 posts in conflict-ridden southeastern districts, special operation team members will reportedly patrol Silopi, Cizre and Sur where the PKK presence is the highest and make sure that terrorists do not dig ditches anymore.

Interior Minister Efkan Ala has been reportedly briefed about a new post-operations plan that includes building 15 posts in the three districts. According to reports in the Turkish media, the posts will allow special operation team members to quickly intervene in incidents in the districts and prevent terrorists from digging ditches. In addition, the posts are meant to deal a heavy blow to the PKK's way of delivering arms to its urban branches.

Sources close to the security forces asserted that the posts will be able to withstand PKK attacks with heavy weapons and explosives.

The 35-day counterterror operations concluded successfully in the Silopi district on Monday and media has reported that 535 barricades have been removed and 270 ditches have been re-filled. In addition, the curfew imposed on the district was lifted between 5 a.m. and 6 p.m. as of Tuesday.

Security forces also detonated 800 explosives and killed 136 terrorists in the counterterror operation. However, security forces have urged locals to immediately report any suspicious cable or mechanism that officials have said could be found running from a heater to a refrigerator and under pillows. Security forces will immediately respond to any report and perform necessary measures.

More than 20 people with suspected links to the PKK's urban branches were detained in simultaneous pre-dawn raids in Istanbul's 22 districts.

Carrying out operations at 36 addresses, special operation team members along with riot squads detained over 20 suspected PKK members who are accused of funding the terrorist organization by way of prostitution, gambling and smuggling.

Two more people outside Istanbul were also detained in the operation, reports in the Turkish media said.

DRONE SEIZED IN OPERATION IN SILOPI

A drone belonging to the PKK was seized in an operation while security forces continue to cleanse the Silopi district of explosives and barricades after reports that it has been cleared of the PKK presence.