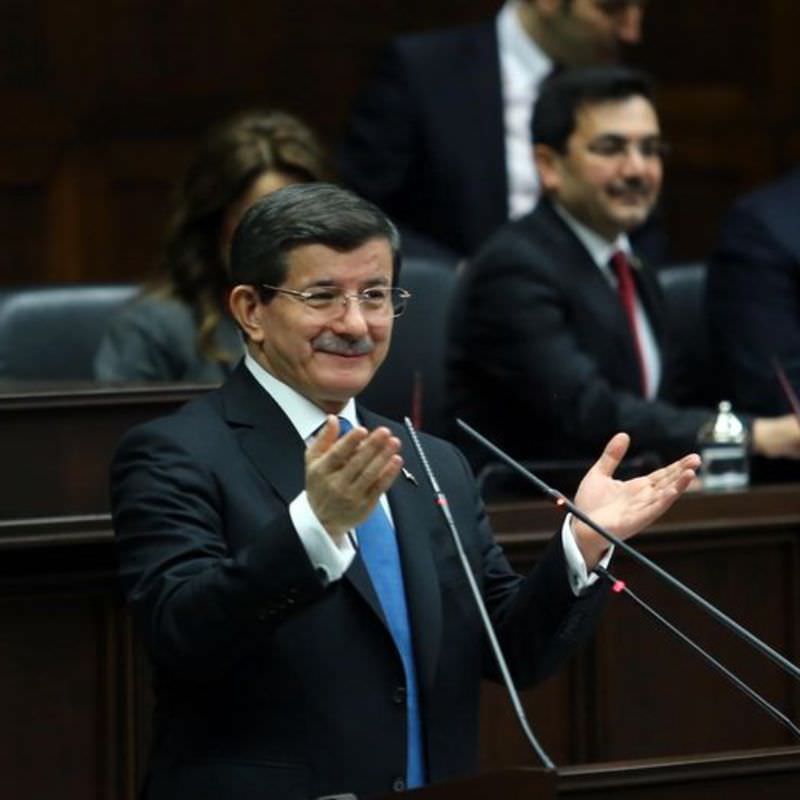 by Nurbanu Kızıl
Feb 10, 2015 12:00 am
Prime Minister Ahmet Davutoğlu has highlighted the importance of the domestic security reform package while harshly criticizing Turkey's main opposition, the Republican People's Party (CHP), for collaborating with and adopting the same rhetoric as the Gülen Movement and trying to create chaos in the country.

He spoke at AK Party's Parliamentary Group meeting on Tuesday and highlighted that the government will continue to fight infiltrators through lawful means. He stated that they would actively implement more reforms to provide a secure and free environment for all citizens in Turkey and uphold democratic principles to ensure domestic safety.

Davutoğlu underscored that the AK Party has successfully lifted the state of emergency in Turkey's southeast, attributing its success to the establishment of security. "Security assures freedoms, and the lack of security means a state cannot guarantee freedom for its citizens" he said, arguing that freedom is the most basic principle of human dignity. He pledged that the government will not allow anybody to interfere in freedom of other people, while it will ensure the prevention of all restrictive and prohibitory measures.

The Prime Minister harshly criticized Kılıçdaroğlu's remarks at their last parliamentary group meeting, in which he described the domestic security reform package as "authoritarian" and called on people to take to the streets to resist it.

"Instead of calling on people to take to the streets, Kılıçdaroğlu should call people to the ballot box" Davutoğlu said, adding that resolving issues through democratic means should be a priority of everyone who lives in Turkey. He also noted that the proposed security reform package is in line with European standards and that the opposition leader does not seem to be aware of this fact.

Davutoğlu likened Kılıçdaroğlu to the coup leaders of 1960s and - referring to his previous remarks about calling people to take to the street s- said that by defending violent protestors who throw Molotov cocktails to create chaos, Kılıçdaroğlu is no different from a provocateur. Furthermore, he criticized the opposition leader for taking orders from Pennsylvania, where the leader of the Gülen Movement resides, claiming there are distinct similarities between the rhetoric used by CHP and the Gülen Movement.

Davutoğlu accused the CHP chairman Kemal Kılıçdaroğlu of resorting to undemocratic means, claiming the opposition leader is "hopeless" in the ballot box. "CHP never won and will never win votes in the ballot box" the PM said, and added that they see chaos and crises as an opportunity to get a hold of the government and cooperate with the Gülen Movement to create unrest. Davutoğlu also called CHP supporters to raise their voice against the chairman who is controlled by external actors rather than party principles.

"The opposition consists of fragmented rather than unified political actors" said Davutoğlu, who stated that the AK Party has unified Turkey in the past 12 years by appealing to people in all regions and coasts. He said this was the sole reason behind the reconciliation process, which is not simply a technical process but involves the reunification of brethren who have fought together in Turkey's War of Independence. He reiterated that the government will continue to address the issues faced by Turkey's minorities in general and noted that more concrete steps will be taken specifically to resolve the issues of Alevi citizens in the near future.

The domestic security reform package, which was introduced by the government in October aims to establish a balance between freedom and security of the people while enhancing the civilian identity of the state. It was prepared in accordance with the EU Harmonization Committee and by taking into consideration the revision of Turkish state institutions in line with the needs of the New Turkey.