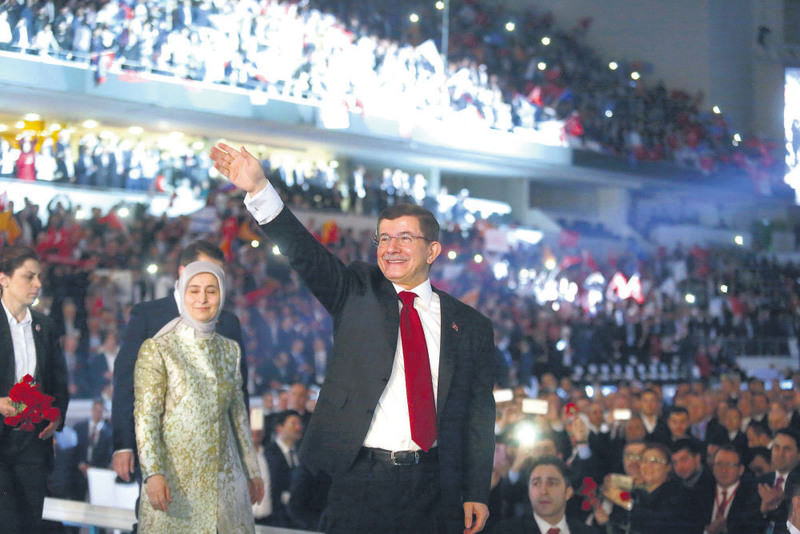 With less than two months until the general elections, PM Davutoğlu introduced a ‘New Judicial Reform Strategy' that consists of 22 major reforms. Earlier this week the prime minister revealed his election manifesto, in which switching to a presidential system, drafting a new constitution and taking democratization steps top the AK Party's election promises

Prime Minister Ahmet Davutoğlu has introduced a "New Judicial Reform Strategy" before the upcoming June 7 general elections. The announcement of the judicial package, which consists of 22 major reforms, came only two days after Davutoğlu introduced his ruling Justice and Development Party's (AK Party) election manifesto. Speaking at the Çankaya Prime Ministry Office in Ankara, Davutoğlu said, "It is a must for the judicial system to be regularly reformed. Our first aim is the strengthening of judicial independence and impartiality. The second aim is an increase in accountability and transparency."

Prime Minister added that the third aim is "Ensuring faster and more efficient functionality in the judicial system. Fourth, creating a human-oriented system based on the satisfaction of citizens and finally, an approach that protects and improves freedoms."

Davutoğlu said this is not a "final" package and the proposals will be passed for consultation to actors in the judicial system, non-governmental organizations and bar assosiations.

The package includes: New courthouses to be built, the notary system to be restructured, the number of judges and prosecutors to be increased. In order to make the citizen's work easier, information offices are to be established in court houses, press offices are also to be built there, legal education to become widespread and the bankruptcy system to be restructured. Further more, the bill aims to activate e-judicial services, to protect the rights of citizens abroad more and to review the regulation of the legal profession.

The AK Party election manifesto touches on four major points – the establishment of a new constitution, switching from a parliamentarian to a presidential system, democratization reforms and combating Gülen Movement infiltration into state institutions.

In addition, with a new constitution and system of governance, the AK Party aims to successfully finalize the reconciliation process, which aims to end the decades-long conflict with the PKK by providing constitutional rights to the Kurdish community. With the newly introduced election manifesto and social contract, the AK Party government aims to continue its reforms in Turkey's democratization process, and Davutoğlu announced that Turkey will continue to devote every effort in its EU accession process.

The AK Party's election manifesto also strongly emphasizes continuing its multidimensional foreign policy. Furthermore, it underlines that cooperation with the Balkans, Central Asia, Middle East, Africa and Latin America will be increased and enhanced. The election manifesto affirms the continuation of Turkey's conscientious foreign policy diplomacy, and that the AK Party will apply all strategic efforts to make Turkey a global power. Furthermore, the AK Party government will continue its devoted efforts to combat the "parallel state" and other relevant organizations. Davutoğlu also criticized the opposition for not having a vision, and predicted that the AK Party will receive over 50 percent of the vote in the upcoming elections.
Last Update: Apr 18, 2015 11:25 pm
RELATED TOPICS