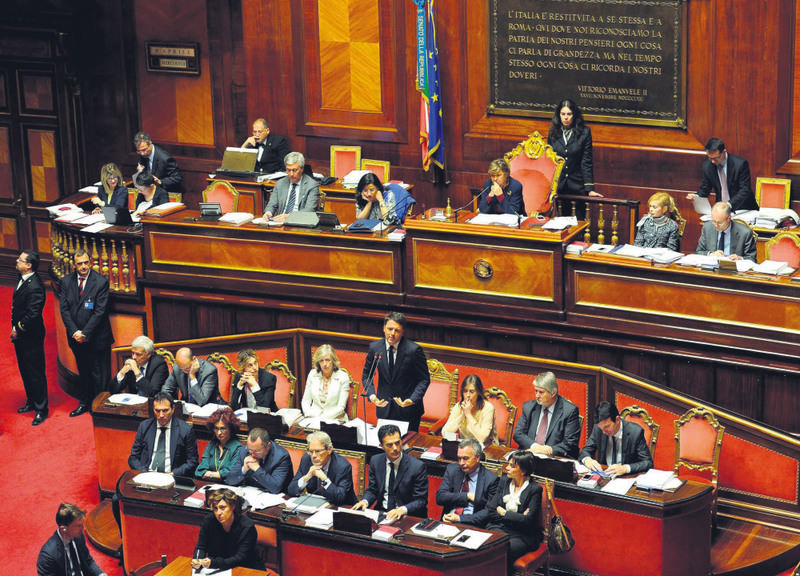 As Ankara continues to discuss the switch from a parliamentary system to a presidential one, the new electoral system approved in the Italian parliament is expected to end Italy's decades-long coalition chaos. The country has had 63 governments since World War II, yet none have been strong or durable enough to push through core reforms, despite wide recognition that change was necessary

Italy has recently approved a new electoral system to ban coalition governments, something that has been blamed for the country's tiresome economic crisis and political instability, a problem also reflected in Ankara's political agenda. Italy has included a new regulation in its electoral system, titled "Italicum," bringing to an end the era of coalition governments. From now on, 40 percent of the total vote will be enough for a party to come to power as a majority.

If no party wins 40 percent, a run-off ballot between the two largest parties will be held after the first election to determine which one is to rule the country on its own. This decision, which is reminiscent of a presidential system, was made to get rid of their coalition governments that are reminiscent of Turkey's position during the 1990s and is also on the agenda in Ankara, where discussions regarding the system are being held.

The governmental system has been a hotly debated issue throughout modern Turkey's history beginning with the eighth president, Turgut Özal, and continuing with the ninth president, Süleyman Demirel. It has been brought up again by current President Recep Tayyip Erdoğan, who has claimed that a presidential system is more suitable to the country's political structure.

Speaking during an inauguration ceremony for projects carried out by the Turkish Cooperation and Coordination Agency (TİKA) in Ankara, Erdoğan hailed Italy's decision to ban the formation of coalition governments in the name of providing stability.

In response to concerns voiced by opposition parties over whether a presidential system will preserve a separation of powers, Erdoğan assured that checks and balances would be installed stronger than ever in the presidential system, which he has been saying would be in the best interests of Turkey.

Parliamentary Constitution Commission Head Burhan Kuzu: "Italy has been devastated by coalitions. France also suffered from a similar problem for years. Eventually it tried to find a new formula with a presidential model. A total of 286 parties joined an election held in Italy about seven or eight years ago. Certainly they made the right decision. And for us, the resolution lies in introducing the presidential model. This decision also indicates that we are on the right track. A democracy failing to sustain stability cannot bring any benefit to a country. Economic stability cannot be achieved without political stability. Coalitions have devastated the country, so I am totally against coalitions."

Parliamentary Justice Commission Head Ahmet İyimaya: "Italy has suffered from coalitions for a long time. Baltic states have a culture of reconciliation. These countries are successful since they can resolve their fundamental problems. For a system that resolved the fundamental problems, the government matters as far as a general directorate. For the structures still contending with big problems, however, a coalition is the second greatest problem. This is an amendment in electoral law, and the recent deeds are in accordance with democracy. The discourse of a coalition at the elections is only a hallucination. The people of Anatolia would make a single party come to power alone, they will authorize the AK Party to issue a new constitution."

Bülent Turan, AK Party Istanbul deputy: "Coalition governments are the enemies of stability. Seemingly, Italy has comprehended that it cannot reform its economy without political stability, as the parties cannot form a government without winning at least 40 percent of votes from now on. This is an aspiration to have a strong ruling power. Turkey has been experiencing this for the last 13 years. Italy's new law will hopefully attract the attention of some of our parties who favor coalitions and do not have a claim to come to power alone. Like Italy, our effort is to erase the word coalition from our vocabulary. With its knowledge and intelligence, our nation is already realizing what Italy wishes to do with its laws."

Professor Levent Köker: "About 70 governments have been formed in Italy since 1948, which makes the average lifespan of a government about one year. However, a coalition is required if such a system is to be implemented in Turkey. In other words, this would be a coalition to adopt this system. A constitutional reform is needed for that. Therefore, at least two parties are required to form a coalition and reconcile on adopting the new system. Italy has limited this with at least 40 percent of the vote; this rate can vary in our system."
Last Update: May 10, 2015 5:39 pm
RELATED TOPICS