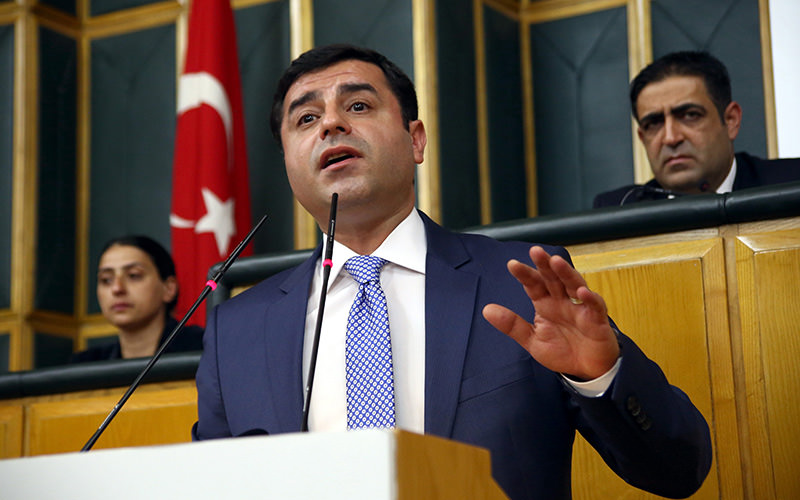 Selahattin Demirtaş, the co-chairman of the pro-Kurdish Peoples' Democratic Party (HDP), vowed that if its deputies charged with aiding the PKK terror organization were stripped of parliamentary immunity and tried then "the people" could form a new parliament.

Demirtaş's controversial remarks came at the HDP parliamentary group meeting held at Parliament on Tuesday, where he claimed that the proposal aims to liquidate the HDP.

"The Parliament is [a representation of] the will of the people, we will defend this. If our friends are arrested, if they are stripped of their deputy rights, no option will be incontestable for us. People form parliaments, not parties, and the people can form multiple parliaments if they wish to do so. If they wish to bring this issue up, then this group, [of] 59 people, will stand by its people. The people, the public would be able to do whatever they wish to do and we would not stand in the way of our people. Defending the will of parliament does not mean defending the will of the Justice and Development Party (AK Party)," Demirtaş said.

Although Demirtaş did not elaborate this option, his words and his emphasis on the multiplicity of legislative organs were interpreted as the signal of 'a regional' parliament, assembly or committee structure in line with HDP's "democratic autonomy" policy and regional autonomy demands for Turkey's Kurdish-dominated southeast.

The idea of walking away from the parliament, which is expressed through the famous Turkish idiom "sine-i millete dönmek" (which is a double-entendre idiom that could be translated as 'to return to the bosom of the nation')[D2] , had been voiced various times by political parties of all ideologies in Turkish political history, especially by the opposition to block the policies of the government. However, it is no secret that the PKK terror organization has already formed illegal local committees during the two-year-long truce period. When the PKK renewed its armed insurgency in July 2015, these committees acted as alternative bodies to the government rule in towns and neighborhoods where PKK's armed wing and local youth groups set up barricades and dig ditches filled with explosives.

Amid multiple fistfights and heated debates, the proposal to lift parliamentary immunities temporarily for dossiers already submitted to the Parliament was approved by the unanimous vote of the AK Party, the Republican People's Party (CHP) and Nationalist Movement Party (MHP) deputies late Monday at the Parliamentary Constitution Committee.

The ruling AK Party submitted on April 12 a draft proposal to the speaker's office to lift parliamentary immunity, which was signed by 316 AK Party lawmakers before submission. A quorum of 367 deputies would be required for the proposal to be accepted out of the total 550 deputies, and the proposal would be open for a referendum if the proposal receives between 330 to 367 votes in favor. AK Party and MHP are openly in favor of the proposal, whereas CHP administration declared it would not object to the proposal during the committee and general assembly, but several CHP deputies openly declared that they will vote against the proposal. AK Party and MHP have 317 and 40 seats, respectively, and 10 additional votes from the CHP would enough for the proposal to pass. However, rumors suggest that several AK Party deputies will also vote against the proposal during the secret voting in general assembly, while the attitude of the majority of CHP deputies is highly unpredictable.

As of late March, there were 43 CHP, 41 HDP, 22 AK Party and six MHP deputies facing the lifting of their parliamentary immunity. Many deputies had had multiple cases launched into them.
Last Update: May 04, 2016 4:47 pm
RELATED TOPICS