AK Party's Canikli: Party member president model is not an alternative for the presidential system 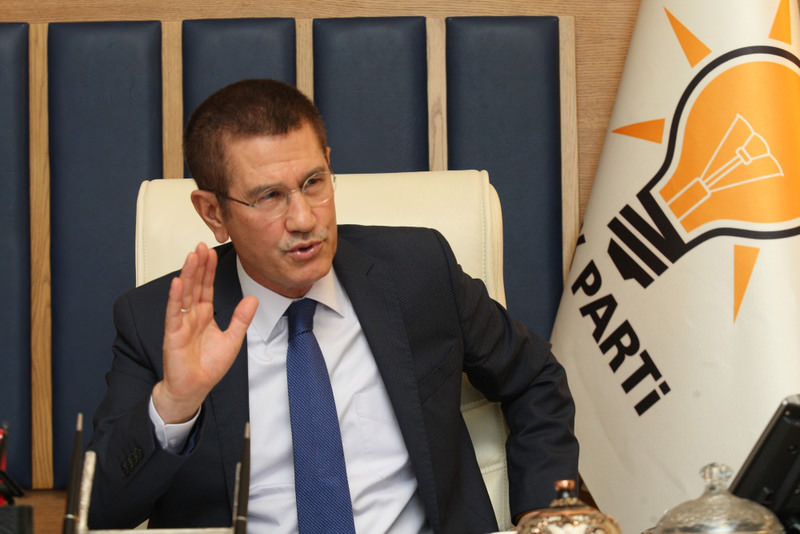 AK Party Group Deputy Chairman Canikli said the party member president model, which has been prepared by the party to present to the Parliament, is not an alternative to the presidential system and it will only defuse certain potential risks

Group Deputy Chairman Nurettin Canikli of the ruling Justice and Development Party (AK Party) announced that over recent days the party has been preparing a "mini constitutional package" to present to Parliament, which would enable Turkish presidents to be members of political parties. Explaining why the AK Party has preferred to bring this four- to five-clause reform package to the general assembly instead of waiting for the ongoing constitution preparation process, Canikli said that they aim to solve issues in the system via other methods, since the current Parliament will not be able to ratify the new constitution. 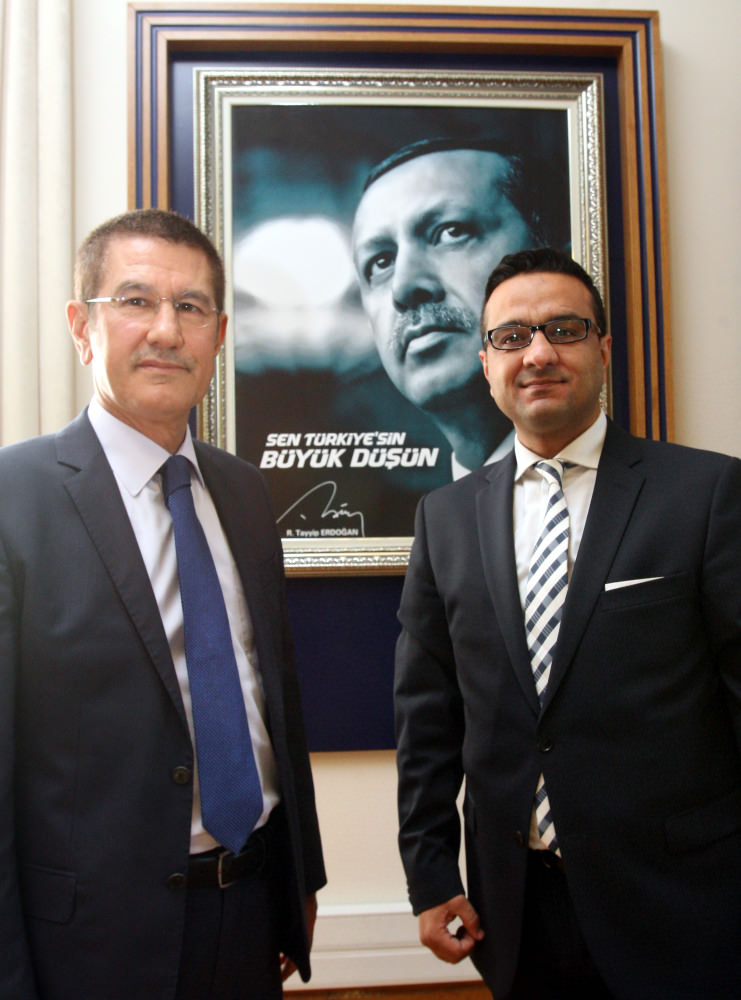 Daily Sabah: In recent days, you stated that a small constitutional reform package, which will allow a party member president model, will be discussed in Parliament. Can you explain why the AK Party has preferred to bring this four- to five-clause reform package to the general assembly, instead of waiting for the ongoing constitution preparation process to conclude?

Nurettin Canikli: The preparation for a civil constitution is still continuing and we will introduce it to the parliament and the public. The process is going according to the plan and we are not taking a step back. However, the political situation is that passing a new constitution is not possible with the current distribution of seats determined after the Nov. 1 elections. It became clear that with the dissolution of the constitutional commission which was constituted by the delegates of all four parties during this term. Therefore a new constitution has no chance of being ratified by this parliament. This is the reality.

Yet there is a serious issue in the current constitution regarding the authorities of the president and the prime minister. This issue often clogs the system and in the future it can cause instability. The cause of the issue is the ambiguity regarding the balance of power between the president and the prime minister. As it may cause conflicts in the future, we have to address this.

The current system in Turkey designed by the 1982 Constitution is, contrary to common belief, not a parliamentary system. In a parliamentary system, the president would not have executive and administrative authority. In the current Constitution, under the article of executive power, the president's authority and elections is regulated. Therefore the president is, by law, a part of the executive, if not the head of it. With the 1982 Constitution, the president is granted an authority which any parliamentary system would not grant to the president.Moreover in none of the parliamentary systems is it possible to observe the president directly elected by the public. The election and authorities of the president are purely symbolic in such systems. These two examples suggest that our current system is something different from a parliamentary system. The relation between the legislative and the executive has the common characteristics of a parliamentary system; however, the examples I provided indicate that it is closer to a presidential or semi-presidential system. This situation causes problems in application, even after the president is being directly elected by the public, the ambiguity regarding authorities still lingers. Therefore, we have to address this ambiguity and remove the articles which may cause a problem. We were planning to address the issue with the new constitution, but as I have said before, it is clear that the current Parliament will not be able to ratify it; thus we needed to resolve it via other methods. We need to, because if it is not resolved, Turkey will not function well. The ambiguity of authority may cause conflicts between a president and a prime minister who originate from the same political party. Our current constitution actually nurtures different views towards crises. We do not know when we will have the new constitution prepared, but it is definite that it will not be ratified by the current parliament. In addition, it is not possible for just one party to prepare the new constitution, as it is a social contract; it needs to be accepted by the public as well. If not addressed, Turkey may face comparatively dire crises, especially if the president and the prime minister are from different political movements.

NC: A new constitution consists of at least 120 articles; thus a 100-article reform bill would need three or four months uninterrupted assembly of Parliament to pass. The most important part is that when you are writing such an extensive constitution, you cannot completely satisfy each and every party. For example, if the Nationalist Movement Party (MHP) agrees with 90 articles, but there are some other articles which are contradictory with their policies, they would decline the constitution as a whole. If a couple of articles of the constitution fail to pass, the whole constitution fails to pass, as it is integral. However a package with three or four clauses may actually pass. This current condition is a problem not just for the AK Party, but for the whole political system of Turkey. Many deputies are acknowledging that we are trying to address the issues which may clog the system or cause a crisis. This reform might receive the support of all parties. Some may have their reservations, but considering that it will be a secret ballot, deputies may vote according to their own views on the subject, without the direct influence of their party chairman. Therefore, passing a small reform package is comparatively more possible than passing a whole constitution.DS: Is the party member president a permanent solution?

It is not a permanent solution; it is a temporary one. It will resolve most of the issue; however, it does not remove all the risks and we are always stating this fact. Therefore, an extensive new constitution and a presidential system are needed. Still, the party member president will at least remove certain potential risks. It is not an alternative to the presidential system.

DS: One critique of the new constitution and the presidential system suggests that these will extend president's authority and will result in despotism. Will the four-clause package be regarded with the same concerns or criticism, and what will you be doing to appease these concerns?

DS: Are the details of the package certain? How many clauses will it have?

It is yet to be finalized, but it is more or less determined. The main aim is to remove the rule which states that a president cannot retain their status as a party member. A couple of clauses related to this rule will also be reformed. This will essentially be all. I have to highlight that this not a novel application, as this was already the case in Turkey until 1960. We are not implementing this for the benefit of the AK Party or President Recep Tayyip Erdoğan; we are just returning the pre-1960 rule. This rule was made in 1961 Constitution and was renewed with 1982 constitution. It is important to notice that both constitutions were prepared by the ones who actualized the coups.

These people did not want the limits of authority between the prime minister and the president to be clear, as a clearly defined system would not cause any crisis and they would not be able to control the country easily. That is why we have the 1961 and 1982 constitutions. The current system was established in such a way that it would often clog and have crises. We are currently experiencing these issues. They are still waiting for a conflict to happen, so they will be able to stage a coup against the government. Therefore, this reform is not specific for a person or a period.DS: How do you evaluate CHP Chairman Kemal Kılıçdaroğlu's statement that a "presidential system cannot be implemented without bloodshed?"

It only verifies the points I have covered. Kılıçdaroğlu is talking like the representatives of those who staged or want a coup. He is also using the rhetoric of the PKK and other terrorist organizations. As I have said before, this system existed in Turkey, which was changed as a result of coups. Today, the same mentality is being represented by Kılıçdaroğlu and he is their spokesman. The terrorist organizations, such as PKK and the Revolutionary People's Liberation Party-Front (DHKP-C), which he supports, are actually shedding blood. The CHP, the party that Kılıçdaroğlu leads, supports the heinous acts by terrorists with their statements and actions. This kind of a statement could only be made by a person who is supportive of terrorist organizations. Once again, we realized that how well-timed our reform is.

DS: According to public opinion, this package is AK Party's plan B. So if the package fails to pass, does the AK Party have a plan C?

We will try everything we can, as this is our duty to our country. Issues like investment are also important; however, firstly we have to remove the clauses which may endanger the system. To have a strong stable administration, you have to have the infrastructure.

If the package fails to pass, we cannot do anything about that package, as there are not any other mechanisms than those stated in the constitution. The so-called mechanism suggested by Kılıçdaroğlu also does not exist; however his statement is dangerous. Still whatever they say, we will always play by the rules. I wonder what Kılıçdaroğlu is planning to do if the package is passed. How will he shed blood? With the help of the PKK or other extremist left-wing terrorist organizations? He is already doing this.

DS: With this package, will the system be semi-presidential? How would you define Turkey's governance system if this package passes?