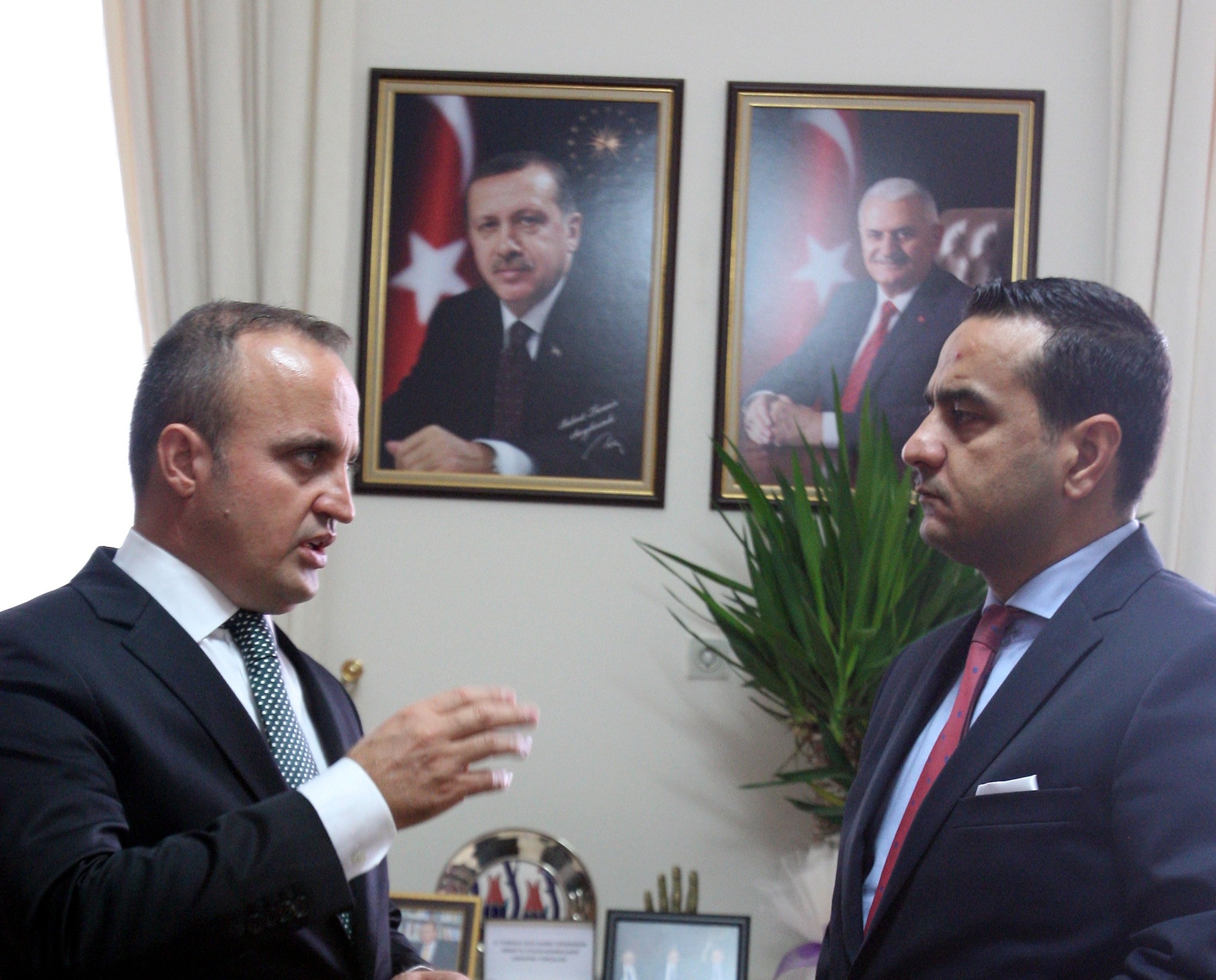 Claiming that the AK Party is the only party that is effectively trying to thwart the PKK's efforts to establish an armed command over southeastern Anatolia, Turan stated that their efforts disturbed the PKK, leading to the murder of AK Party politicians in the region. Turan signified that the discourse of Peoples' Democratic Party (HDP) Co-Chair and Van Deputy Figen Yüksekdağ, who said "The AK Party is guilty for these murders, as they barred the political sphere," was simply the same as the discourse employed by the PKK.

Turan, evaluating the AK Party's road map for the new constitution, said that they believed a new constitution based on the presidential system will pave the way for a more stable administration in Turkey. Adding that the AK Party found MHP Chairman Bahçeli's statement important, Turan said that it should be a politician's duty to reach a concrete conclusion without squandering any political opportunities.

Ali Ünal: What is your opinion on the political killings of the AK Party administrators in southeastern Anatolia? What is the PKK trying to achieve with these murders?

Bülent Turan: The AK Party is the only party that is fighting against the PKK's efforts for achieving armed command over southeastern Anatolia. Despite all the threats, AK Party members are maintaining their democratic political fight against the PKK. This situation is clearly disturbing the PKK and as they become more disturbed, the attacks on The AK Party politicians are becoming more and more frequent. They are trying to provoke the AK Party into a violent clash. However, whatever they do, the AK Party will not allow the PKK to take command of the region. The AK Party is trying to protect the integrity and unity of the country and will continue to do so.

A.Ü.: How do you evaluate HDP Co-Chair and Van Deputy Figen Yüksekdağ's statement, "The AK Party is guilty of these murders, as they barred the political sphere?" 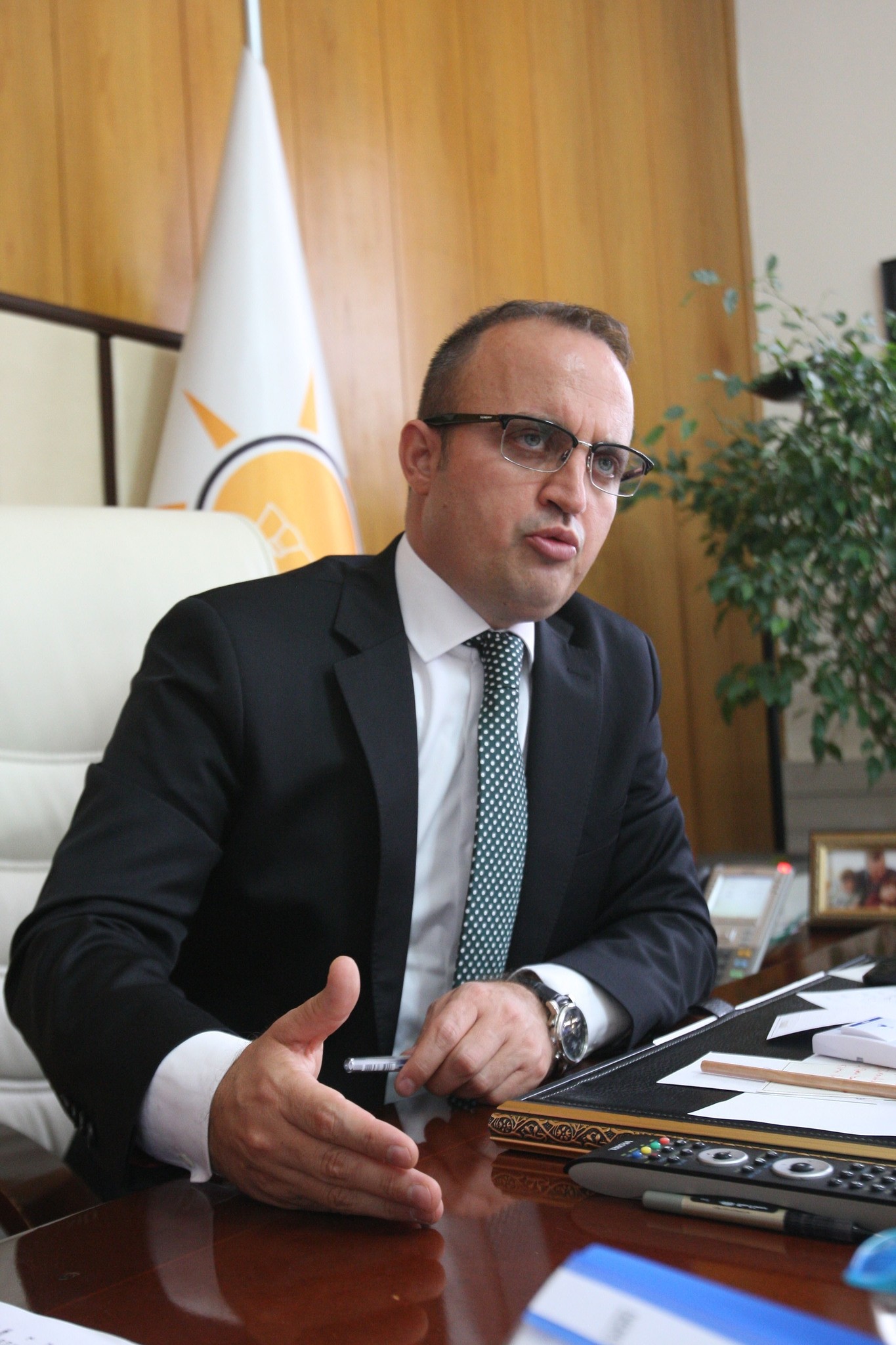 B.T.: Many believed that the HDP had an opportunity to disarm the PKK; they even had promised their voters that they were going to be active in achieving peace in the region. However, the HDP accepted the dominance of the PKK administration and is only acting as a mouthpiece for them. Their co-chair Selahattin Demirtaş, who sang songs and made jokes on TV, is now threatening to spark violence. They are seemingly condemning the attacks; however, any condemnation without the mention of the PKK, the perpetrator, is just an attempt to cover up the crime. This discourse accusing the AK Party of terrorism is not any different than the PKK's discourse. In this sense, Selahattin Demirtaş and Figen Yüksekdağ employ the same discourse as the PKK leaders Cemil Bayık and Murat Karayılan.

A.Ü.: Are there any countermeasures to be taken in order to prevent future attacks on AK Party administrators in southeast Turkey?

We are a party that has embraced democratic political principles and values. We will not take up arms just like the others. We are not afraid of anyone or any group. The security forces will take the necessary precautions. It would be inappropriate for us to take our own measures.

A.Ü.: Prime Minister Binali Yıldırım said that a new constitution that includes the presidential system will be submitted to the general assembly next week. What will be the AK Party's road map during this process?

All the parties that have a seat in Parliament have been promising a new constitution since the 2011 elections. Therefore, everyone has to collaborate on this subject. As the AK Party, we believe that a new constitution based on the presidential system will pave the way for a more stable administration in Turkey. In this sense, MHP Chairman Devlet Bahçeli's recent statements are important for us. It should be a politician's duty to reach a conclusion without squandering any political opportunities.

A.Ü.: There are allegations that the AK Party is in a secret agreement with the MHP, as the AK Party lacks the qualified majority to take this new constitution to a referendum. How do you respond to these claims?

Since our establishment in 2001, we have always been transparent about our agreements and cooperation with other parties. In recent years, we have announced the agreements and cooperation with either the Republican People's Party (CHP) or the MHP to the public. It is still the same today. We have been talking about the presidential system for a long time. Chairman Bahçeli's call was made publicly; therefore, there are not any secret agreements.

A.Ü.: Another speculation is that the AK Party is deliberately submitting the new constitution proposal to Parliament, knowing that it will not pass, thus, forcing Parliament to call a snap election. What is your response to this speculation of a snap election in 2017?

B.T.: The people cast their votes so we can realize our promises. As we do not possess the qualified majority to pass the new constitution by ourselves, we contributed to the formation of Constitution Conciliation Commission at Parliament. Unfortunately, right at the very beginning of the meetings, the CHP tried to impose their demands, just before leaving the negotiations. We are doing everything we can to achieve reconciliation among parties. Since our first election in 2002, the AK Party has never used any event or situation as an excuse for snap elections. There was a snap election in 2007 due to the presidential crisis. The elections of 2011 and June 7, 2015 were held regularly. As it was not possible to form a government after June 7 elections, we were forced to have a snap election on Nov. 1. Therefore, these speculations are baseless. We are content with the four years of government that was granted by the people.

A.Ü.: Is the presidential system indispensable for the AK Party? Do you believe the proposal by MHP Chairman Bahçeli to consolidate the parliamentary system might be able to solve the system crisis in Turkey?

A.Ü.: How will you respond to the concerns that the proposed "Turkish presidential system" will not have any checks and balances and will ultimately pave the way for an authoritarian regime in Turkey?

This incident was organized and staged by the HDP and its supporters. Turkey and the whole world witnessed their attempts to manage the perceptions of the public. They wrongfully tried to show that the state was reverting to its policies of the 1990s and was committing extra judicial executions under police custody. HDP and some of the CHP MPs talked about Külter at the general assembly almost every day and tried to sabotage the parliament. Even the US Department of State Spokesman John Kirby said that they were concerned about Hurşit Külter. However, we eventually found out that Külter was living and he emerged in Kirkuk. None of the CHP and HDP MPs who have released statements, tweeted and spoke at the parliament about Külter did not apologize after he was found. Moreover, they did not even talk about The AK Party administrators who were martyred in Southeastern Anatolia. Even though the news about Hurşit Külter's execution were false, the deaths of Ahmet Budak, Naci Adıyaman, Aydın Muştu and Aydın Aktert were very real. On the other hand, this is not the only lie the HDP has ever told. Prior to the Hurşit Külter incident, HDP Group Deputy Chairman İdris Baluken had claimed that a soldier named Osman Karadeniz had gone missing. However, in a short time afterwards, it was realized that Osman Karadeniz was not missing; he had deserted the army and joined the ranks of the PKK. When Karadeniz was killed during a clash with the army, the whole situations was revealed. As it was the case with Külter, the HDP MPs did not apologize for being wrong after the revelation; moreover, they used their much known discourse to attack The AK Party. We believe that the HDP had known where Hurşit Külter was exactly, from the very first day.
RELATED TOPICS