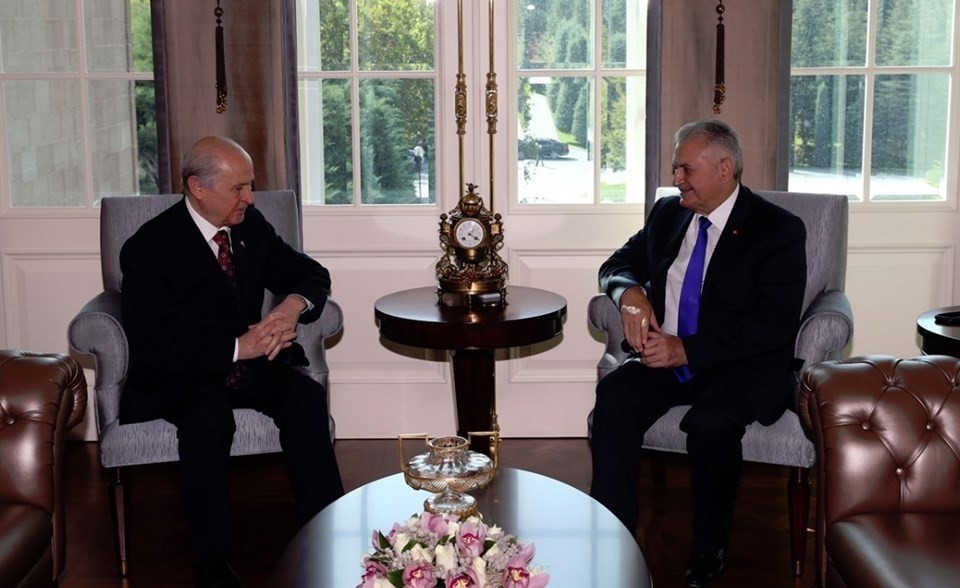 Switching to a presidential system became a hot topic again after opposition MHP Chairman Devlet Bahçeli's remarks signaling support for a referendum on a constitutional change. After the recent meeting between PM Yıldırım and Bahçeli, the PM announced they will submit an amendment including a presidential system as soon as possible

The ruling Justice and Development Party (AK Party) is preparing to submit a bill for a new constitution and presidential system, according to Prime Minister Binali Yıldırım on Tuesday. Switching from a parliamentary system to a presidential system has been a hot topic in Turkish politics since former Prime Minister Recep Tayyip Erdoğan became the country's first president elected by public vote in August 2014. Speaking to a large crowd at the party's weekly parliamentary group meeting in the afternoon, Prime Minister Yıldırım commended opposition Nationalist Movement Party (MHP) Chairman Devlet Bahçeli's remarks signaling support for a referendum for a constitutional change and shift to a presidential system.

Bahçeli suggested that his party is in favor of continuing the parliamentary system but they are not against a referendum on the presidential system while adding that if the AK Party brings the draft constitutional reform package to Parliament, which the Prime Minister announced it is to be submitted soon, it will produce "plausible and sound results."

Following a critical meeting with Prime Minister Yıldırım at the Çankaya Palace on Monday regarding the presidential system debates, Turkey's opposition chairman Bahçeli expressed support for a possible referendum on the presidential system during the party's weekly parliamentary group meeting on Tuesday. Contrary to the Republican People's Party (CHP) Chairman Kemal Kılıçdaroğlu, MHP leader Bahçeli has preserved the "Yenikapı spirit" fostered during a major Democracy and Martyrs Rally at Istanbul's Yenikapı Square, which united millions of Turkey's citizens from all backgrounds and politicians of all ideologies and various beliefs. Strongly responding to the CHP's criticisms against the MHP for cooperating with the AK Party, Bahçeli told the main opposition to "not comment on things that they do not know of." "Either the de facto situation [of the presidential system] must be fixed or the de facto situation must gain a legal status to end the constitutional violation." Underlining that the MHP is the people's party, Bahçeli also added, "I see no harm in asking the nation [referring to transitioning to a presidential system through referendum]."

Bahçeli's remarks appealed to the Turkish public, as his remarks received strong support on social media accounts. Prime Minister Yıldırım praised Bahçeli saying he had said "truly spoken words," and that he was "on the right path." Yıldırım said, "We will submit a proposal including new constitutional amendments and a switch to a presidential system to Parliament as soon as possible," he told his party members and the guest attendees at Parliament, adding the final decision belonged to Parliament. Yıldırım reiterated the AK Party's position that the government will seek a referendum on a presidential system even if a strong enough majority is achieved in Parliament.

Despite CHP leader Kılıçdaroğlu's obstinate stance toward reaching a common understanding on presidential system debates, Prime Minister Yıldırım once more called on the main opposition leader and urged him to resolve the constitutional confusion. "I promise you here as the AK Party, if you support this amendment [constitutional amendment on presidential system] and we receive more than 367 votes then the last say will be given to the people, because it is the people who own this. We can take it to the people, they can then decide and end all of these debates," Yıldırım added. The existing constitution was drafted after the Sept. 12, 1980 coup. In an effort to enhance the government's administration as well as find immediate and definite resolutions to problems in the system, Yıldırım urged for the transition from a parliamentary system to a presidential system. "The presidential system is a new road map for Turkey to enlighten its vision. We must all leave our personal greed aside as Turkey's future is beyond everything else… Hopefully this matter will soon be dropped from Turkey's political agenda," he added.
RELATED TOPICS