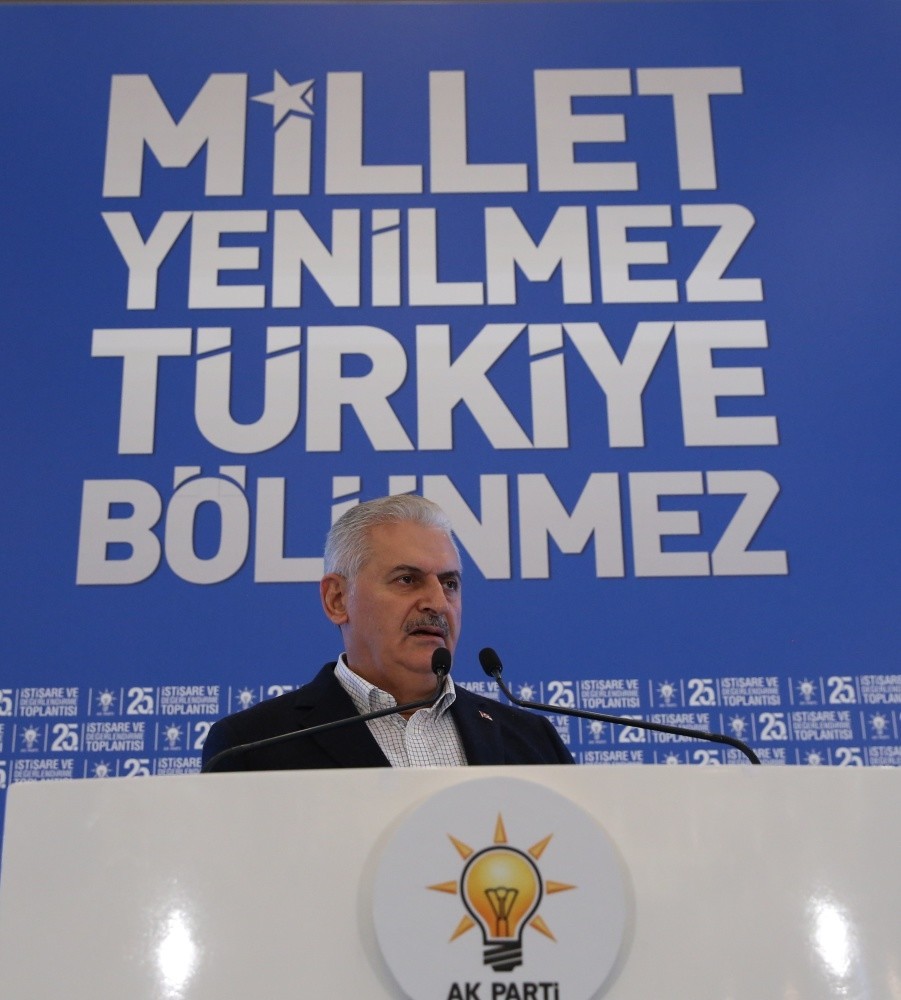 PM Yu0131ldu0131ru0131m
by Merve Aydoğan Oct 24, 2016 12:00 am
As Turkey's ruling Justice and Development Party (AK Party) concluded another Advisory and Assessment Camp in Afyonkarahisar province on Sunday, party Chairman and Prime Minister Binali Yıldırım informed that the party had finalized its work on establishing a new constitution as well as the presidential system proposal set to be submitted to Parliament in the upcoming days. During the AK Party's 25th Afyon retreat attended by all party deputies as well as ministers and members of the Central Executive Board (MYK) and the Central Decision and Administrative Board (MKYK), Yıldırım reiterated that the obstacles ahead of the governing system are soon to be resolved as he reaffirmed that the people will have the last say. Along with the new constitution and presidential system, the determined combat against all terror groups along with foreign policy was among the topics the AK Party had discussed. Under the "Nation cannot be defeated, Turkey cannot be divided" motto of the AK Party retreat, the Turkish prime minister underlined that "decisions taken here are to enlighten our future." Despite ongoing terror threats caused by various terror groups, the AK Party head and members vowed on Sunday to combat against all plots attempted against Turkey's stability.

Touching upon the ongoing discussions on the new constitution and presidential system, Yıldırım said, "We hope to eliminate all obstacles ahead of the governing system as we vow to pave the way of our democracy and protect it. Thus, we have completed all works for the presidential system and for the new constitution." Continuing on by noting that all discussions have been finalized on both topics, Yıldırım announced that it is to be presented to the Turkish Parliament in the upcoming days. As part of the current constitution, it requires a minimum of 367 votes to change the Constitution by vote in Parliament and 330 votes required to hold a referendum. The AK Party has 316 seats in the 550-member chamber and needs to gain support from opposition party deputies to change the Constitution. However, Prime Minister Yıldırım reasserted that even if the AK Party receives 330 or 367 votes, the people will have the last say and the referendum will be held. "As the people give the best decisions, this problem will also be resolved by the people. Turkey must at once end the discussions on the governing system debates and forward its energy toward the country's future," Yıldırım added.

'We are committed to combating terror much more today than yesterday'

With Turkey continuing to battle against all terror groups, Prime Minister Yıldırım once more reiterated that the AK Party government will continue to combat against terror with much more devotion than ever. Underlining that terror is to be removed from Turkey's current political agenda, Yıldırım stressed that there will be no reconciliation process until the PKK terrorist group is eliminated from the midst of the government and people. "Our combat against terror in the framework of establishing security will continue," Yıldırım added and reaffirmed that reconstruction of the terror-torn southeast is to continue. Also, speaking exclusively to media members following the AK Party's Afyon retreat, Yıldırım provided information on the latest involvement of Turkish tanks in Bashiqa in support for the peshmerga forces and said "Turkish tanks along with the peshmerga forces have moved forward toward the Bashiqa village to eliminate terrorists upon the request of peshmergas." The Turkish tanks' involvement came following U.S. Defense Secretary Ash Carter's recent remarks stating that Turkey and Iraq have reached an agreement in principle that could eventually allow a Turkish role in the campaign to retake Mosul from Daesh militants.

Underlining that July 15 is a milestone for Turkey, Yıldırım once more noted that those who fail to take a solid stance against terror will eventually realize the truth. Reminding that the Gülenist Terror Group (FETÖ) was established during the AK Party's governing period, he further called upon the main opposition group Republican People's Party (CHP) to question its party first before criticizing the AK Party. "No terror cult, whether it be FETÖ or any other separatist cult, will be able to shelter in the AK Party. We have assessed each one of our members one-by-one and did whatever is necessary and are continuing to do so. None of our deputies have any connection to ByLock [a program widely used by the Gülenist terror members to communicate], any terror group including FETÖ," Yıldırım asserted. As he underlined that the operations and investigations are to continue against FETÖ, Yıldırım assured that no one along the process will be victimized.

Despite being in an unstable and critical region, Yıldırım reminded that the current geography we are in continues to provide opportunities for Turkey and underlined that the AK Party will increase its friends and lessen its number of enemies in the upcoming period. In this respect, Prime Minister Yıldırım said the AK Party will devote efforts to enhance relations with not only Iraq and Syria but also with Egypt in the upcoming period. Touching upon relations with the European Union (EU), Yıldırım said that Turkey has no confusion over relations with the EU. "The EU must reassess its future vision especially following the U.K.'s decision to exit membership. All pledges given to Turkey must immediately and easily be fulfilled without any further requirements introduced. Visa liberalization must be finally fulfilled," Yıldırım said. He finalized his remarks by calling upon the EU that if Turkey's requirements are not addressed then Turkey will take steps toward such a stance.
RELATED TOPICS