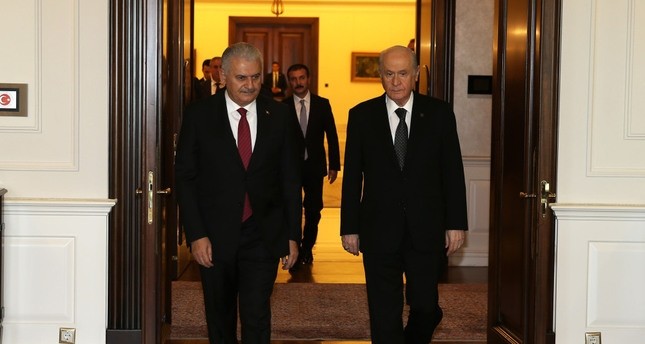 Turkey's prone administrative problems will reportedly be addressed in the new constitutional proposal expected to be submitted to Parliament before the end of this week. Also, a Turkish-style presidential system will be on the cards

With the ruling Justice and Development Party's (AK Party) constitutional proposal expected to be submitted to Parliament by the end of the week, recently revealed details of the proposal are increasing the likelihood that a presidential system will be established under the Turkish constitution, addressing Turkey's time-worn, deep-seated administrative problems. Questions regarding Turkey's heavily debated constitutional amendments are likely to be answered by week's end as AK Party officials have hinted at the impending submission of the proposal for constitutional change in Turkish Parliament. In response to a query following a Cabinet meeting on Monday, government spokesman Numan Kurtulmuş said that they will submit their proposal to Parliament as soon as possible.

After a meeting between AK Party Chairman and Prime Minister Binali Yıldırım and opposition Nationalist Movement Party (MHP) leader Devlet Bahçeli last week, it was announced that they had reached an agreement on the AK Party's constitutional proposal in terms of its principles. Commenting on the latest developments surrounding Yıldırım and Bahçeli's talks, Kurtulmuş said that discussions with the MHP have reached a certain stage and they plan to submit the proposal to Parliament in the coming days without delaying the process any longer.

''There are two different packages. One is extensive, while the other is focused on a constitutional reform package, intended to address certain disparities that emerged within the system when the president was elected by popular vote,'' Kurtulmuş said. ''The extensive reform package will seemingly be postponed. When we are able to get the support of the 330 members of Parliament for the latter, we will begin to readdress the matter."

Providing details about the AK Party's systemic proposal, the government spokesman said that the new system is based on checks and balances as well as accountability, adding, ''We foresee a system in which legislative is strengthened, the judiciary is independent and the administration is consolidated in a separate institution. Briefly, this is what our proposed constitutional reform package is all about. We emphasize a consolidated presidential system,'' Kurtulmuş said.

President Recep Tayyip Erdoğan previously said Turkey should design the new presidential system according to its needs, instead of borrowing it from other countries.

"Let us establish a Turkish-style presidential system for Turkey. This will give our country an opportunity to develop much faster and I defend it," Erdoğan said last week.

Thus, the new Turkish system is not an adaptation of the examples we see from the presidential or semi presidential systems around the world. Accordingly, the Turkish-style presidential system will be based on effective separation of powers, along with an extensive checks and balances mechanism. In the new system, Parliament will be responsible for overseeing the president's actions, to a certain extent. In order to establish accountability in the system, the constitutional proposal allows for the establishing of a parliamentary investigation commission to control the president's actions when necessary. The current Constitution states that no appeal shall be made to any judicial authority, including the Constitutional Court, against the decisions and orders signed by the president. However, the AK Party Party's proposal allows the president to be brought to trial in the Supreme Court if there is an overwhelming majority vote in Parliament (413 out of 550) in favor of it.

The proposal also suggest that only one or two ministers to be chosen among parliamentarians and the rest of the Cabinet will be chosen from among non-parliamentarian figures such as experts and academicians. Moreover, if one parliamentarian is appointed as minister, his/her term as deputy will end automatically, the proposal suggests. AK Party sources also indicated that they are planning to drop the election threshold to 5 percent from the current 10 percent and change the election system to a single-member district system. After switching the system to a presidential one, AK Party officials expect President Erdoğan's continuation of his duty without having a new presidential election.

Currently, the AK Party has 316 seats while the MHP has 40; the combined seats of the two parties are not enough for the direct passing of the proposal. Yet, if the proposal receives between 330 and 366 votes, the constitutional change can be moved for a referendum, which pushes the AK Party to seek agreement with opposition MHP.
RELATED TOPICS