Proposal on new constitution to be submitted to parliament soon as AK Party, MHP agree on details 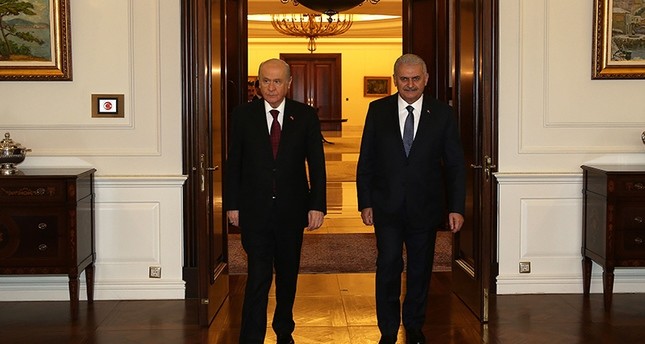 The ruling Justice and Development Party (AK Party) and opposition Nationalist Movement Party (MHP) agreed on the details of the new amendments to the Constitution as their proposal is expected to be presented to Parliament late Friday or Saturday.

The two parties have held discussions for two months on the new constitution, which is expected to oversee Turkey's shift from a parliamentary system to a presidential one. Last week, Prime Minister and AK Party Chairman Binali Yıldırım and MHP Chairman Devlet Bahçeli announced that the two parties had reached an agreement on the constitutional amendments.

Meanwhile, Kurtulmuş, replying to a question on whether there was any crisis with the MHP regarding the constitutional amendment, said a transparent process has been carried out since the beginning of the negotiations.

He said the discussions have continued both at the chairman and authorized lawmakers' level and the proposal will be finalized soon.

Noting that they are focusing on technical details, Kurtulmuş said, "Substantial agreement [on a package] has been reached. There are some differences with the MHP on some articles and negotiations are underway to resolve those differences. Final refinements will be made and a limited constitutional amendment package will be placed in front of the TBMM over the coming days," he said.

The deputy prime minister said they hope the amendment package would get the required 367 votes from two-thirds of the deputies in the Parliament, enough to directly pass the package.

He said, however, a referendum will be held even if it is approved by more than 367 votes.

Meanwhile, the president's spokesperson İbrahim Kalın said Wednesday that there is an ongoing process between the AK Party and the MHP and he was sure the Turkish people would fully support that process.