First 4 articles of constitutional package accepted by the parliament

The Parliament has begun discussions on the constitutional amendment's individual articles after 338 out of 480 deputies voted in favor of launching talks, surpassing the psychological threshold of 330 votes. Each article will be discussed at the general assembly, which is expected to be completed in about two weeks

Parliament's General Assembly launched talks on Monday on the long-debated constitutional amendment package, after 338 out of 550 deputies voted in support of the planned package and adopted the first two articles of the bill. Proposed by the ruling Justice and Development Party (AK Party) and backed by the Nationalist Movement Party (MHP), the constitutional amendment foreseeing Turkey's transition to a presidential system was discussed at the Parliament's General Assembly on Monday. Prime Minister Binali Yıldırım will also be working throughout the process along with deputies and ministers.

The second article of the proposal increases the number of deputies from 550 to 600 in accordance with the increase in population.

The third article, which will allow every Turkish citizen over 18 to be in the parliament was also accepted late Wednesday. The article which decreases the age requirement from 25 to 18 was voted in favor by 341 deputies. 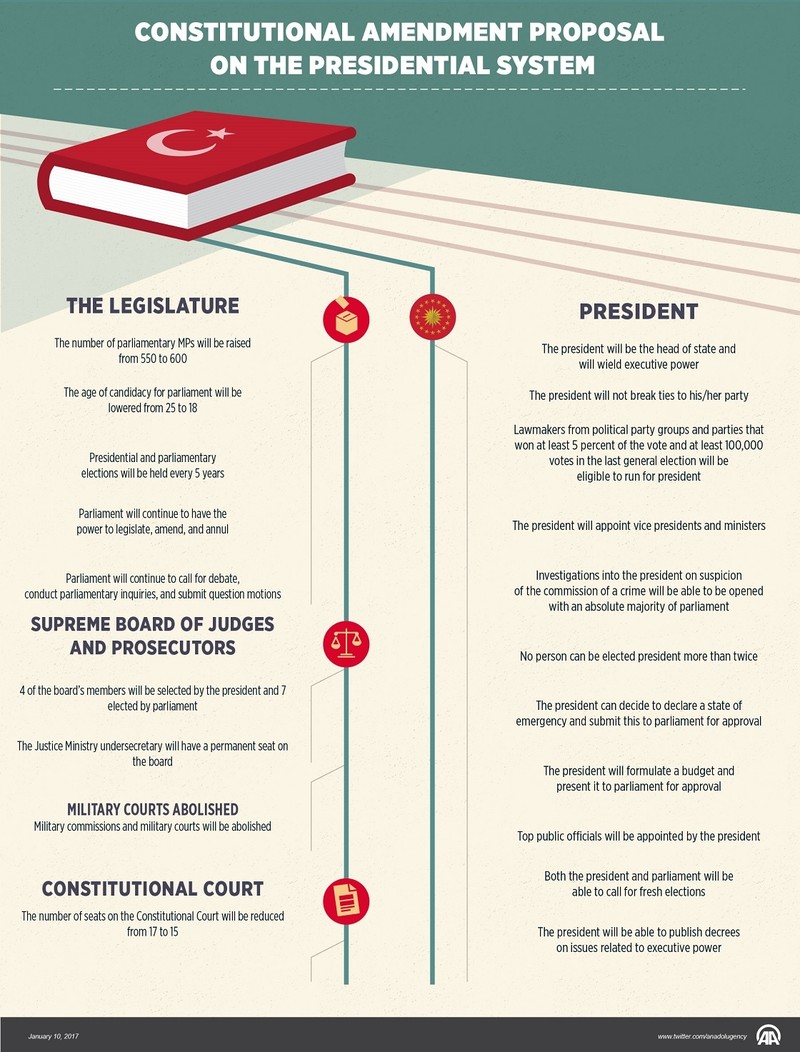 Proceedings on the discussions of the individual articles of the constitutional amendment were accepted, with 338 votes at the general assembly in the very early hours of Tuesday. Accomplished with the participation of 480 deputies, 338 deputies voted in favor of proceeding discussions in the secret ballot, surpassing the psychological threshold of 330 votes. Speaking on behalf of the government before the vote, Justice Minister Bekir Bozdağ said that this amendment aimed to end decades of presidential system discussions in Turkey.

"The matter finalizing this discussion is to put it on the agenda of Turkey and the Turkish nation and ask them for their judgment. This is not a personal matter. It is a national matter; it is an issue for Turkey and about the future of our great nation," he said. "This Parliament is authorized to make a constitutional amendment and legal regulations while terror is continuing, even in the state of emergency and it is not open to discussion," he added.

Responding to the main opposition Republican People's Party's (CHP) criticism of the amendment, he gave an example from Mustafa Kemal Atatürk and İsmet İnönü when they advocated a presidential system. He stated that Atatürk and İnönü were also presidents and members of a party at the same time. "What we are doing is turning back to Atatürk's constitutions. It is returning to the 1921 and 1924 Constitutions and to the presidency having a link with a political party. You are against Atatürk's constitutions," he said.

Prime Minister Yıldırım, speaking on behalf of the AK Party said that the constitutional change will "completely solve" the country's existing and potential political problems. "We'll talk about Turkey's future and the constitutional change will be discussed in all its details today, and I hope that the discussion will be completed with the participation of all parties." Yıldırım highlighted the importance of the nation's will for change, and said that "Turkish citizens have never made a mistake in politics so far, but we, as politicians, can make mistakes, thus we trust the people's decisions." Yıldırım said that the package aims to provide a system that allows every party to easily reconcile issues with each other in assembly, and said that a balance of powers will also be provided.

Claiming that the constitutional amendment will result in a regime change in Turkey, Republican People's Party (CHP) Antalya Deputy Deniz Baykal asserted that not seeking consensual agreement will endanger national sovereignty. Baykal expressed that the new constitution was being rushed and likened the government to a merchant trying to sell a defective good in a commotion. Stating that the president will simultaneously be the chair of the ruling party according to the amendment, Baykal urged the deputies to act with common sense.

A total of 134 deputies voted against the proposed package, while two abstained, five cast blank votes and one cast an invalid vote. The Democratic Peoples' Party (HDP) did not participate in the voting process. Making a statement about the first day's voting, MHP Chairman Devlet Bahçeli said, "338 votes in favor is a normal amount to start. Parliament has voted to proceed to discuss individual articles. We will see what the future holds for us."