President Erdoğan: Turkish people in favor of a presidential system 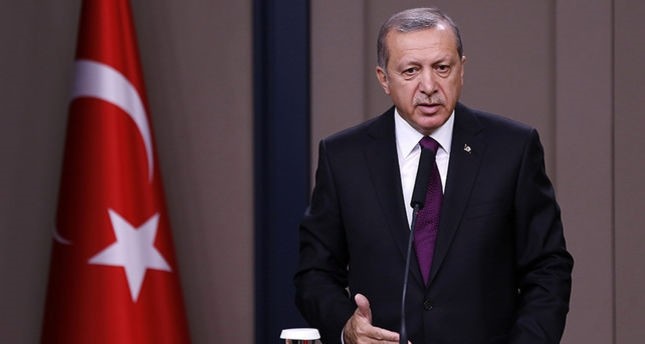 by Merve Aydoğan Jan 23, 2017 12:00 am
Turkey's President Recep Tayyip Erdoğan told members of the media before departing on a visit to Africa on Sunday that the Turkish public welcomes the new presidential system which is to come following a referendum. The constitutional amendment package, which is expected to change the fate of Turkey's political future, is highly likely to be brought to referendum in April after it received more than the minimum 330 votes in Parliament following nearly three weeks of heated debate.

Commenting on a question regarding the possible outcomes from a referendum on constitutional change, President Erdoğan affirmed that it is still too early to judge. "I can only tell you that our people, our nation welcomes a presidential system - that has a president affiliated with a political party in Turkey - that is to come after a referendum and the numbers obtained from the recent polls show a significant amount of support on the matter," President Erdoğan said. Speaking at Istanbul's Atatürk International Airport prior to departing on a four-day Africa tour to Tanzania, Mozambique and Madagascar, President Erdoğan noted that the government would not go ahead with such a proposal if it were not for such strong support from the public for a system change in Turkey.

"We must first see what our people will decide in the referendum… After the referendum, there is a process toward elections and that seems to be in 2019. With those elections, we will once more go to the people and recognize their decision. Once we receive those decisions from our people then we can take the further steps," Erdoğan stated.

Indicating that a presidential system with a president affiliated to a political party is the first step toward a significant process in Turkey, President Erdoğan noted, "We believe that this [change in system] will allow Turkey to enhance its performance in decision making toward its future."

Meanwhile, the opposition Republican People's Party's (CHP) claims that the constitutional reform aims to establish one-man rule and change the governmental system to a regime, while many politicians and columnists have highlighted that the reforms aim to solve the problems of the existing system, which has been a matter of political debate for decades.

On that note, Turkey's president also dismissed the main opposition CHP's claims of a regime change in Turkey and affirmed that "this is only a change of the governance system."

As the constitutional amendment package was approved by the majority in Parliament following the second round of voting, the referendum is very likely to be held on April 2, according to the current road map.

However, prior to declaring a referendum on the constitutional changes, the president must approve the package within a 15-day legal period. Once approved by the president, the referendum must be held 60 days after the announcement made in the official Gazette, on the first Sunday of the month.

Referred to as the '''Turkish-style presidency,'' the constitutional change will bring about a number of reforms, replacing the current parliamentary system in which the president serves only as a ceremonial figurehead alongside a prime minister, with a presidential system that will assign the president as the sole executive head of state in the country.

President Erdoğan to share Turkey's expectations in fight against the FETÖ in AfricaAhead of his four-day tour to Africa, the Turkish president,, told members of the media that Turkey aims to further enhance bilateral relations with all African states.

"Our goal is to have embassies in all African countries, ultimately turning Africa into a continent with which we have much closer bilateral ties," he said.

The Gülenist Terror Group (FETÖ), which has a worldwide network established primarily through its network of schools, also has a wide range of networks throughout the African countries. In that respect, President Erdoğan is expected to discuss FETÖ and its establishments in Africa with his counterparts in Mozambique, Tanzania and Madagascar while "Sharing Turkey's expectations from these countries toward combating FETÖ."Meanwhile, the Turkish Maarif Foundation (TMV), the only institution authorized to open Turkish schools abroad, was tasked with taking over schools operated by FETÖ following the deadly coup attempt on July 15, 2016. In that regard, the TMV has already taken over Gülenist schools in Guinea, Niger and Somalia, while signing a memorandum of understanding with Chad, Burkina Faso, Sudan and Gabon along with Senegal and Mauritania.

Commenting on the matter, Erdoğan said: "With the help of the Maarif Foundation, Turkish Cooperation and Coordination Agency (TİKA) and voluntary organizations we will prevent the [FETÖ] terrorist organization from being a threat to our country, nation and friends."

In regards to U.S. President Donald Trump who was inaugurated Jan. 20, Erdoğan said that he is looking forward to learning Trump's policies on the Middle East. He also said that efforts are underway to set a date for a possible meeting with Trump, adding that he would bring up the situation in the Middle East during their first meeting.
Last Update: Jan 23, 2017 11:07 am
RELATED TOPICS