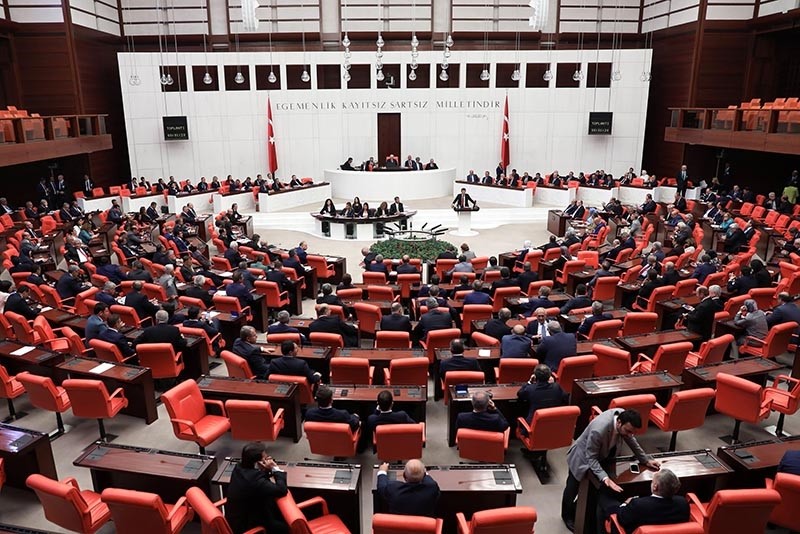 Defense Minister Nurettin Canikli (C-R) delivers a speech during an emergency session to extend military operations in neighboring Iraq and on September 23, 2017. (AFP Photo)
by Daily Sabah with Agencies Sep 23, 2017 12:00 am

The Turkish Parliament approved a motion to extend Turkey's military mandate for Iraq and Syria for one year on Saturday.

The parliament convened in an extraordinary session to approve the mandate, which was valid until Oct. 30.

During a live broadcast on Sept. 21, CHP Chairman Kemal Kılıçdaroğlu urged KRG President Masoud Barzani to act with common sense, saying that the referendum would further deepen problems in the Middle East. Kılıçdaroğlu said: "We support the integrity of Iraq and Syria," adding that a KRG referendum would spark an ethnic war in the region. CHP Deputy Chairman Öztürk Yılmaz also voiced his opposition to the referendum, saying that the KRG should annul the decision.

"If [Barzani] fails to step back … then the government should prepare a package containing military, political and economic measures [against the KRG]," Yılmaz said.

MHP Chairman Devlet Bahçeli spoke out against the upcoming referendum, as well, saying in a series of tweets on Sept.16 that Barzani should cancel the public vote. Bahçeli also called it "existential issue for Turkey."

The extraordinary parliamentary session on Saturday followed a National Security Council (MGK) meeting which took place Friday, in the aftermath of the Kurdistan Regional Government (KRG)'s insistence on holding an independence referendum, despite international opposition.

The decree, renewed annually since 2014 and set to expire next month, allows Turkey to send troops over its southern border if developments in Iraq and Syria pose threat to Turkey's national security.

The mandate, read in parliament Saturday, lists combating PKK terrorists operating in Syria and Iraq as well as the Daesh terrorist group as national security requirements. It also emphasizes the importance of Iraq's territorial integrity and says "separatism based on ethnicity" poses a threat to both Turkey and regional stability.

Opposition Nationalist Movement Party (MHP) previously announced that they would support the ruling Justice and Development Party (AK Party) for the extension of military mandate to Iraq.

Turkey has many times reiterated its opposition against the planned independence referendum to be held in Kurdistan Regional Government (KRG) and disputed areas, yet the administration of Barzani says they will go forward with the vote.

In addition to Turkey, the U.S. and many other Western allies of Iraq oppose the planned referendum, which will possibly pave way for secession of KRG from Iraq.