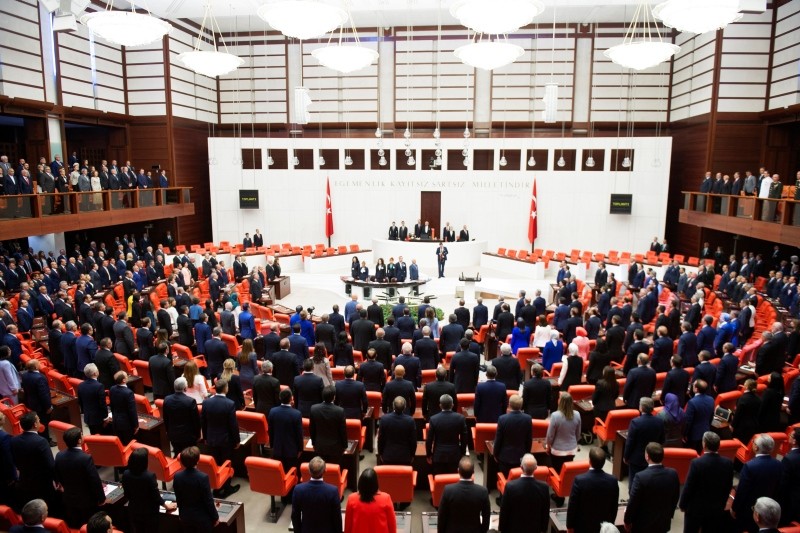 Members of the Parliament observe a moment of silence before the oath-taking ceremony. (IHA Photo)
by German Press Agency - DPA Jul 07, 2018 12:00 am

Turkey's expanded parliament was being sworn in on Saturday, with 600 deputies taking the oath of office, two weeks after the July 24 elections.

The number of parliamentarians was increased from 550 to 600 following constitutional changes that were approved in a referendum on April 16, 2017.

Deputies convened at 2:00 p.m. (1100 GMT) at the Grand National Assembly in Ankara, observing a moment of silence for Mustafa Kemal Atatürk, the founder of the modern Turkish republic.

In his opening remarks, acting parliamentary Speaker Durmuş Yılmaz said: "It is our joint responsibility to protect the honor of this constituent assembly which is the sole safeguard of our independence and democracy."

Yılmaz, a former central bank governor and a deputy from the central province of Uşak from the Good Party (IYI Party - IP), added: "It is a moral duty to avoid attitudes and behavior that could overshadow its (the assembly's) prestige."

President Recep Tayyip Erdoğan won re-election in a decisive first round with 52.59 percent of votes and new powers, including over the judiciary and the ability to rule by decree.

When he is sworn in on Monday, he will become both the head of state and government, with the prime minister's post abolished under the new system.

The country's last prime minister, Binali Yıldırım, was sworn in as the lawmaker from Izmir. He was also nominated as the ruling Justice and Development Party's (AK Party) candidate for the parliament speaker's post,.

Erdoğan, who will be sworn in on Monday, watched the swearing-in ceremony briefly from a balcony.

"Our goal is a powerful parliament, a powerful government and a powerful Turkey," Erdoğan said earlier Saturday as he addressed AK Party deputies.

The AK Party failed to win a majority on its own in parliament, but secured a total of 344 seats through the People's Alliance with the Nationalist Movement Party (MHP).

The main opposition Republican People's Party (CHP) has 146 seats in parliament, while the People's Democratic Party (HDP) has 67 seats and the IP 43 seats.

At 22, the youngest lawmakers are Rümeysa Kadak from the AK Party in Istanbul, and Dersim Dağ from the HDP in southeastern province of Diyarbakır. Meanwhile, former CHP chair, 79-year-old Deniz Baykal, is the oldest parliamentarian. Baykal, who was supposed to join today's session as acting speaker, passed on this duty to Yılmaz, citing his poor health as he's recovering from a stroke in January.

Among the HDP's new deputies is prominent journalist Ahmet Şık, who spent 430 days in detention and was convicted on terrorism charges in April. Actor Barış Atay, who was briefly detained in May for a tweet criticizing the government over Turkey's deadliest mining accident in 2014, was elected to parliament from the HDP in southern Hatay province.

Here's the oath of office taken by the members of parliament:

"I swear upon my honor and integrity, before the great Turkish Nation, to safeguard the existence and independence of the state, the indivisible integrity of the homeland and the nation, and the absolute sovereignty of the people; to remain loyal to the rule of law, to the democratic and secular republic, and to Atatürk's principles and reforms; not to deviate from the ideal according to which everyone is entitled to enjoy human rights and fundamental freedoms under the notion of peace and prosperity in society, national solidarity and justice, and loyalty to the Constitution."