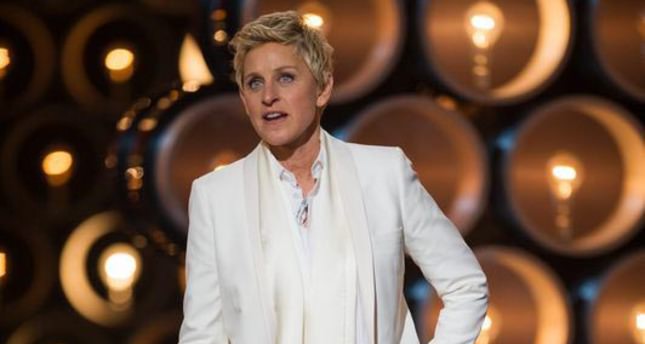 by Mar 05, 2014 12:00 am
Hollywood (AFP) - Oscars telecast ratings hit a 10-year high, preliminary data showed Monday, as Ellen DeGeneres won plaudits for her slick hosting of Hollywood's biggest night - and broke a Twitter record. The 86th Academy Awards were followed by 43 million Americans Sunday, drawing the biggest audience of any entertainment program since the finale of hit sitcom "Friends" in May 2004, according to estimates by ratings service Nielsen.

The three-and-a-half-hour show averaged a 12.9 rating for adults aged 18 to 48, based on the preliminary figures cited by ABC, the Oscars broadcaster. DeGeneres, hosting the Oscars for the second time - seven years after her first turn - ordered pizza, took a star-studded selfie and poked fun at her audience at Hollywood's biggest night of the year. Following in the footsteps of celebrated Oscars hosts such as Billy Crystal and Bob Hope, the 56-year-old mixed wry, deadpan humor and cracked jokes at the expense of her A-list audience. Her celebrity selfie with stars including Brad Pitt, Meryl Streep and Jennifer Lawrence had nearly 100,000 retweets within five minutes, and over 2.8 million by Monday morning.

The show's ratings were up some 6 percent from last year's, hosted by comic Seth MacFarlane, who was accused of bad taste in some of his jokes. While reviews overall were mixed, many critics lavished praise on DeGeneres, in particular for the way she spent much of the evening among the audience, rather than on stage. "The show was trim, fleet, elegant and organic, with few unnecessary bells and whistles. Almost everything in it seemed to have a purpose," said Entertainment Weekly.