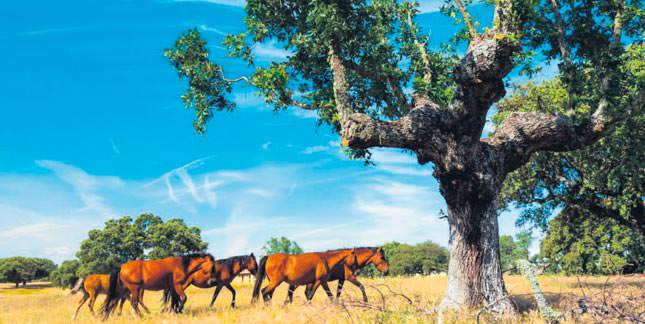 In an oak wood spanning the border of Spain and Portugal, an ancient sight unfolds: wild horses, not saddled or shoed, but roaming free as they did centuries ago, thanks to the new 'rewilding' initiative

Campanarios de Azaba (AFP) - Farming has declined in Spain, leaving the countryside relatively deserted according to conservationists. Now the wild things are coming back: wolves, vultures and rare herbivores.

Dozens of Spanish "Retuerta" horses have been released over the past two years into the 500-hectare Campanarios de Azaba Reserve. "It's a wonderful horse that has been around since time immemorial," despite coming close to extinction, said Carlos Sanchez, director of the conservation group running the site. "We are recovering the most primitive breeds to try to help manage an ecosystem which has been abandoned due to the disappearance of humans."

Nuzzling its mother's velvety brown hide, a foal suckles then disappears among the trees with the grazing herd. "We released these animals to live by themselves, to take care of themselves in their environment," said conservationist Diego Benito, 35. "We don't feed them.

We just watch them and monitor how they are doing in their groups, which are the dominant horses and which of the mares are pregnant."
Overall in existence there are only about 150 Retuertas, which are identified by genetic studies as one of the oldest horse breeds in Europe.

They were brought from the Donana National Park in southern Spain - previously the only place where they existed - to create a second breeding site in Campanarios, where they now number about 50.
Sharing the reserve with rare vultures and free-roaming cows, the Retuerta horses are among the animal pioneers of what conservationists call "rewilding."

The Campanarios reserve is part-funded by Rewilding Europe, an initiative for development through "wild nature" in various countries. "For the first time in history, Europe is facing a situation where there is no grazing anymore," said Frans Schepers, managing director of the Netherlands-based organization. "There has been a lot of land abandonment in Spain over the past few decades," he said. Therefore, in recent years "Spain has shown a very interesting wildlife comeback," with wolves, vultures and even the endangered Iberian lynx recovering in numbers, he added.

Rewilding aims to turn this into an economic opportunity, to draw in visitors and revive abandoned rural areas in the long-term. The Campanarios reserve, currently inhabited just by animals and a handful of staff, aims to draw groups of wildlife spotters and boost the local economy.

Jon Teixeira, 27, works in the reserve planting trees, releasing rabbits and leaving dead chickens for vultures to feed on. "I am glad there is a reserve here. That way we'll have jobs in the area, where there's a lot of unemployment," he said. "And it's a good job there's a place where you can't hunt, otherwise all the animals would be wiped out."

Elsewhere, conservationists this month released a herd of wild oxen to graze in a reserve near the northern Spanish city of Burgos. In the coming months they plan to add endangered European bison and other breeds of wild horse to the Campanarios de Azaba Reserve.
The oxen were set free near the Atapuerca prehistoric site, where archeologists have dug up human remains more than 1 million years old.
Conservationists want to take people visiting the dig on a Stone Age safari to see the living descendants of the beasts that roamed the area eons ago. "In the archaeological site lie the bones of the ancestors of todays' species. These are their evolutionary descendants," said Fernando Moran, a bison specialist at the park.

The Atapuerca site is not part of the Rewilding Europe initiative, but it shares the aim of drawing money and jobs to the abandoned rural areas while also preserving endangered species. "It is about nature conservation, but also tourism, development and land management,"
Moran added. "Spain is in general a fair bit more wild than the rest of Europe. Lots of hectares are being left empty, which for wild animals are obviously perfect."