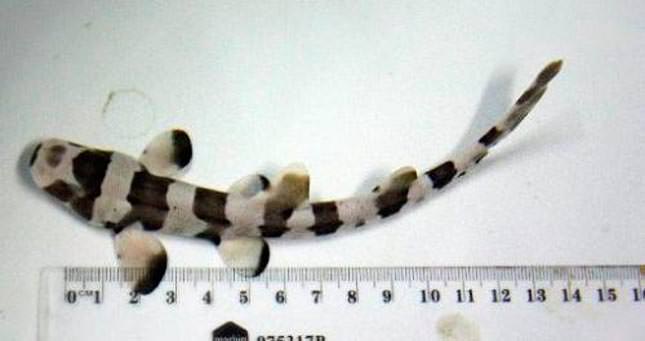 by Mar 13, 2014 12:00 am
MELBOURNE – The Sea Life Melbourne Aquarium successfully hatches the first shark in 112 days via artificial insemination in the hope of saving threatened species. Considered to be a great threat to those who swim and surf in the sea, the creature is truly a magical spectacle.

Australia successfully hatched its first shark born via artificial insemination with hopes that the development can ultimately be used to help breed threatened species, an aquarium. The Sea Life Melbourne Aquarium said the brown-banded bamboo shark pup was born on March 3, ending a process which began in September when aquarists collected a semen sample from a shark in Mooloolaba in northeastern Australia.

It was flown to the southern city of Melbourne and inseminated into the mother the same day, making the pup the first shark to be born via a live semen sample transported from one facility to another, Sea Life said.

Melbourne Aquarium vet Rob Jones said the birth of the shark, which is expected to grow from its initial length of 16 centimeters to an adult size of 1.2 to 1.5 meters, was a milestone in using assisted reproductive technologies. "This is a big leap," he stated.

The hatching is part of a project that started 9 years ago to understand the reproductive behaviors of sharks, animals which are common in Australia but are little understood.

The team hopes their research will help with plans to manage threatened species in the wild, in particular the critically endangered grey nurse shark.

The egg, the only viable of several laid by the shark in November, was monitored weekly during its incubation period of 112 days. "With each insemination attempt, we continue to learn about the reproductive behaviors of Australian shark species," said Melbourne Aquarium research consultant Jon Daly. "Hopefully we can use this technology as a basis for breeding grey nurse sharks in captivity and, in years to come, boost the species' dwindling numbers in the wild." Grey nurse sharks are considered critically endangered, with estimates that there could be as few as 1,500 left on Australia's east coast.

Sharks are a known danger for those swimming, diving and surfing around the country and are currently subject to a controversial cull in Western Australia state after a series of fatal attacks in recent years.

The policy to catch and kill any protected great white, tiger or bull shark bigger than three meters off popular west coast beaches has been condemned by conservationists.