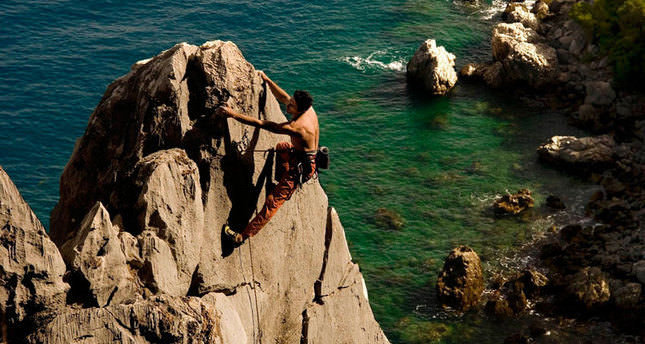 As rock-climbing gains popularity in Turkey, Antalya becomes the go-to destination of both newbies and experienced climbers that are out to push to the limit and enjoy adventure

You use muscles in your arms and legs to pull yourself up a rock face, which takes strength and control. Aside from a good deal of strength, a good deal of courage and finesse is also required. It is not a sport that requires spectators, but is done for personal gratification and accomplishment.

In rock climbing, either you are excited about scaling a vertical piece of stone or you are not. Newbies, who do not yet dare entertain the thought of hanging off the side of a rock just yet, can attend indoor rock-climbing courses. Starting with the absolute basics, the activity will cover all you need to know to get started. It is great introduction to the sport, preparing you for a venue known worldwide.

The new phenomenon took off in 1993 when a few French climbers bolted some routes in the Ala Dağlar National Park. With 13 established rock-climbing areas, the opportunities for establishing new routes is endless due to Turkey's large mountainous nature. Among the most popular rock-climbing destinations is Antalya. It is the largest developed rock-climbing area in Turkey, and by far has spots that must be conquered by enthusiasts.

Geyikbayırı, which is 25 kilometers from Antalya, is the largest sports-climbing area in Turkey.

The main crag is 1.5 kilometers long, and along with several other buttresses, Geyikbayırı provides over 400 routes across all grades, with the potential to develop many more. The climbing is on superb, solid limestone rock, with a variety of feature such as slabs that feature delicate, technical and balancey moves and small crimpy faces to huge overhanging tufas and roofs. The majority of the routes are single pitch, although there are multi-pitch routes as well, mainly two pitch routes. It is most popular in spring and summer due to its accommodating weather, though climbing when it rains is also not a problem for the daredevil. The climbing region is pretty fresh, being only 10 years old. Most of the routes are a few years old. It is a great quality limestone, with many overhanging routes with much tufas. You can climb here even if it is raining. A 70-meter rope is sufficient for most routes, but better safe than sorry.

Akyarlar is a small limestone crag, but it has the advantage that the climbing is straight off the beach.

There are 17 short-bolted routes, ranging from 5b+ to 7a and plenty of bouldering and some non-bolted routes. There is also a great cave that is ideal to cool down in on hot days when it can be explored with a head torch. The rock is smooth with a lot of slopers where it has been rounded by the waves at the bottom, with more featured walls above.

The ideal climbing period for Olympos, which is a magnificent place, is from late September until early June. Summer gets very hot and unbearable to climb unless it is done before sunrise. Olympos is another excellent and justifiably popular sports-climbing area. Olympos is on the Mediterranean coast and is part of the Bey Dagları National Park. There are exceptionally beautiful views, and the rock is of good quality limestone with excellent reliable bolts. There are 10 different sectors, with over 220 routes, with a very good spread of grades.

Olympos is an ideal destination for the lower-grade and mid-grade climber, or if you have mixed abilities in your group, there is plenty for everybody. The climbing is similar to Geyikbayırı, featuring slabs with small pockets that require balancey technical moves and steeper walls with hanging tufas and huge roofs.

Some of the crags also have the advantage of only being a few hundred meters from the beach.