Danish zoo had a choice not to kill the four lions 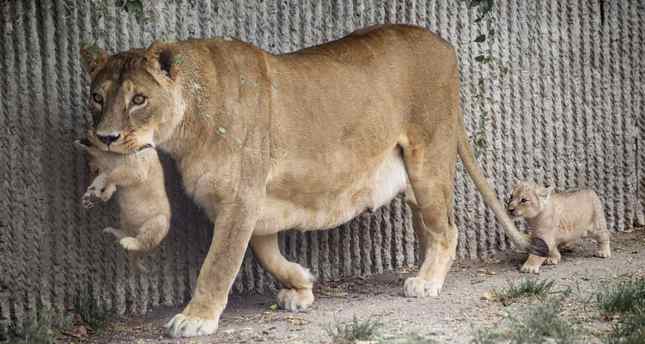 ISTANBUL — After Marius the giraffe, the Copenha- gen Zoo in Denmark put down a fam- ily of lions on Monday. The incident comes about one month after the zoo put down a healthy giraffe in February, sparking a huge back- lash from animal rights groups across the world. At Daily Sabah, we tried to answer the question: have officials at the Copenhagen Zoo gone mad or is this a standard procedure at all zoos around the world? It turns out, they may not be crazy, but the zoo likely did take the easy way out.

The Copenhagen Zoo justifies the slaughter of four lions - two 10-month-old cubs and their par- ents, aged 14 and 16 - on the grounds of genetic conservation and purity. The zoo had to clear the path for a newly arrived young male lion as they argued that inevitably the new male lion would prey on the little cubs and the older male would try to breed with the female cubs, resulting in inbreeding, according to a statement released on Wednesday.

The zoo's staff members were labeled serial killers and murderers on various social network- ing sites. The zoo had already attracted interna- tional reaction after shooting Marius in the head publicly, in front of a crowd including children, before feeding the giraffe to the lions. At that time, a similar argument emerged and the zoo had again claimed that Europe had a small gene pool, and Marius to live would impose a risk of inbreeding.

Divide between the U.S. and Europe

Although animal rights activists across the world spoke out against the incident, the euthanasia also revealed the divide between United States and Europe. Compared to Europe, the U.S. pursues a more open policy for conservation and ensuring genetic diversity and prefers the use of contraception to prevent overpopulation and in- breeding, whereas European zoos favor natural behavior, including sexual reproduction, and are hence against contraception. The executive direc- tor of the World Association of Zoos and Aquari- ums Gerald Dick noted that the Danish zoo's ac- tions were not as shocking as many Europeans zoos that resort to euthanasia, generally as a the last option. "In Europe, there is a strict attempt to maintain genetically pure animals and not waste space in a zoo for genetically useless specimens," he said.

In February, the Copenhagen Zoo also refused the option of giving contraceptives, arguing that it would have unwanted side-effects and affect the animal's welfare. The European Association of Zoos and Aquaria (EAZA), in charge of ensuring that international standards are observed at zoos, said they supported their member's decision and added that zoo animals are rarely killed. In a statement the association said that their objective was to safeguard a "genetically diverse, healthy population of animals against their extinction."

Jesper Mohring-Jensen, a biologist at Jyllands Park Zoo in Denmark also noted that Copenha- gen Zoo's decision was not brutal but they have put common sense before sentimentality. "It's better for the animal to have a good life than to live," he said to The New York Times in a phone interview and added, "That is the Danish view, which is different from the American view. The discussion can sometimes become unscientific and based more on feelings than the understand- ing of animals. Nature doesn't have the same con- cept of justice as humans."

Europe: a land of dead animals

BBC recently investigated the studbook re- cords of European Zoos and the results were shocking. It turns out that not many zoos record or publish the number of healthy animals which have been culled and about 3,000 to 5,000 are "management-euthanized" in European zoos in any given year, revealed Dr. Lesley Dickie, the ex- ecutive director of EAZA to BBC. Here are some fo the shocking results exposed by BBC's research: -Since Obtober 2012, five giraffes have been put down in Denmark -In 2012 four hippos were killed across Europe -Between 2000 and 2012, 12 healty zebras were put down -Between 2000 and 2009, 11 Arabin Oryx were killed in Europe in Edinburgh, London, Rotterdam and Zurich plus a dozen more were euthanized in Qatar and the United Arab Emir- ates, which are also members of the European breeding program.

Turkish zoos are also a member of European Association of Zoos and Aquaria (EAZA) and just like EAZA's other 340 members, they have to sign up for breeding programs and keep a stud- book, which is an inventory for each species re- cording the birth, genetic makeup and death of each animal. Contraception is not used by zoos in Turkey. But does this mean that there are tens of animals being killed in Turkish zoos each year?

The answer is no. According to Yücel Yılmaz, the General Director of the the Faruk Yalçın Zoo in the Istanbul district of Darıca, although the breeding programs are strict and do apply to Turkish zoos, it is up to the zoos to decide what they will do about surplus animals. Noting that with so many zoos opening up in Turkey and also in Europe, there seems to be a chance to transfer the animals to zoos with available space he stated, "Just recently, we had four lion cubs and we trans- ferred three of them to Kahramanmaraş and one to Antalya." He further noted that the difference was in cultural understanding and that European zoos were acting stricter and using various expla- nations, like the conditions and standards of the zoos that offer places for surplus animals not be- ing up to the standards of zoos with surplus animals. "We are more on the compassionate, merciful side. We value life no matter what. Instead of killing the animal, we would strive, and try our best and would select the best suitable home for any animal amongst the places available," said Yılmaz to Daily Sabah on the phone.

So what will happen at the Danish zoo now? Life will go on as usual. In a few days the new male will be introduced to the two female lions who are at the age of breeding.

But the question remains...

What will happen to the new lion and any fu- ture cubs in about 10 years? Wouldn't a perma- nent, both practical and compassionate solution be better? Does it really make sense to allow the animals their own space to reproduce but not to allow them their basic instinct: to survive?
Last Update: Mar 28, 2014 8:17 am
RELATED TOPICS