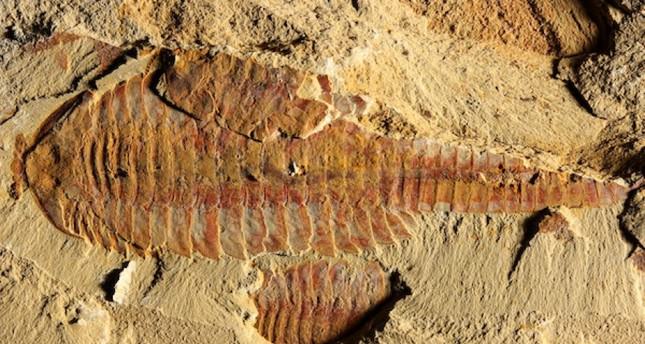 by reuters
Apr 09, 2014 12:00 am
WASHINGTON — You've heard of having a heart of stone, but this old guy takes it literally. Scientists said on Monday they have found a fossil of a shrimp-like creature that lived 520 million years ago with an exquisitely preserved heart and blood vessels that represent the oldest-known cardiovascular system.

Named Fuxianhuia protensa, the creature was a primitive arthropod, a group of invertebrates with external skeletons that includes crustaceans like crabs, lobsters and shrimp as well as insects, spiders and millipedes. The remarkable fossil, unearthed in Yunnan province in southwestern China, dates from the "Cambrian Explosion," a pivotal juncture in the history of life on Earth when many major animal groups first appeared more than half a billion years ago. "It is an extremely rare and unusual case that such a delicate organ system can be preserved in one of the oldest fossils and in exquisite detail," said paleontologist Xiaoya Ma of the Natural History Museum in London, one of the researchers in the study published in the journal Nature Communications. The soft parts of an animal's body tend to decay after death, meaning that fossils typically preserve only the hard parts like bones and shells. "However, under very exceptionally circumstances, soft tissue and anatomical organ systems can also be preserved in fossils," Ma said.

In the case of Fuxianhuia protensa, the fossil showed a tubular heart in the middle of the body with a rich and elaborate system of blood vessels leading to the creature's eyes, antennae, brain and legs. The cardiovascular system, including the heart and blood vessels, is an important organ system that permits blood to circulate around the body and to deliver oxygen and nutrients.

Most animals have such a system, although those without a body cavity like jellyfish do not. This fossil sheds new light on the evolution of animal body organization and shows that even some of the earliest creatures resembled their relatives alive today, the researchers said. Fuxianhuia protensa measured up to about 11 cm, was covered in an exoskeleton, possessed numerous pairs of legs, had a "head shield" similar to those seen in shrimp. It had pairs of antennae and stalked eyes that could be rotated to enable it to see in different directions, the scientists said.
Last Update: Apr 14, 2014 4:33 pm