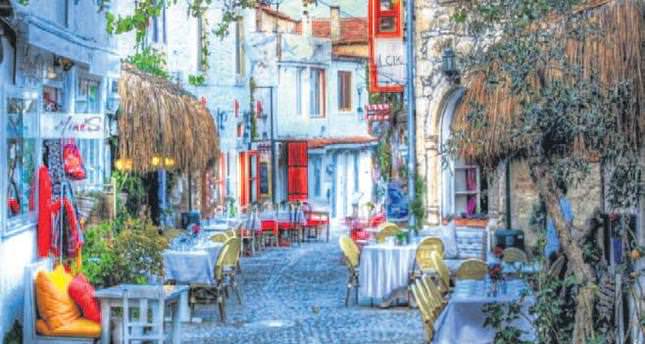 by Leyla Yvonne Ergil Apr 12, 2014 12:00 am
İZMİR — Imagine some of the biggest draws of Turkey, namely the cuisine, coast and quaint village towns all combined into one lovely annual event that ushers in the spring this weekend in Alaçati. Alaçatı is a small coastal town situated on the Aegean Sea in the western province of İzmir, just eight kilometers southeast of Çeşme. Well-known for being a haven for windsurfing with its vast sandy beaches, crystal clear water and steady wind, Alaçati is also well-loved for its architecture comprising stone houses and narrow, yet bustling streets lined with beautiful cafes, restaurants as well as fairytale- like artisan shops that have popped up relentlessly over the past decade. The quaint Ottoman town, which later became an area of Greek settlement, is hosting its fifth annual Alaçati Herb Festival from April 10-13, which introduces the wide range of herbs, both edible and medicinal, that Turkey's luscious Aegean has to offer. Turkey's western coastal regions are famous for their wide diversity of indigenous herbs that have been used traditionally for centuries both as edible delights and for medicinal purposes.

This festival provides the unique opportunity to experience the popular town and its residents while learning from locals about this rich cultural heritage inherent to the Aegean region. To promote this well-loved delicacy of delights from the Aegean and the natural and cultural richness of Alaçati, the Alaçati Herb Festival brings together culinary aficionados, foodies, nature lovers and locals for a weekend of events dedicated to passing on this legacy to further generations.

First held in 2010, the Alaçati Herb Festival aims to expose visitors to the diverse variety of herbs indigenous to the region while also promoting the local traditional cuisine which utilizes these seasonal greens. Every year, the number of participants and activities hosted at the festival has grown exponentially and this year's festival is expected to draw in the largest crowd seen yet.

Although, the festival began on Thursday with the first two days dedicated to cooking workshops and conferences, on Saturday, the event kicks off in full with a parade of locals, women with flowers in their hair, children, decorated cars, bikes, horse carts, donkeys, goats and sheep all accompanied by clarinet and drums throughout the streets of Alaçati. This steadfast tradition in the festival will be followed by a live concert by popular musician and television personality Ayhan Sicimoğlu, who will be joined by his orchestra, "Latin All Stars," to perform a free open-air concert in the town square. On Sunday, the Alaçati Herb festival will also be hosting two competitions, which have fast become popular classics. One contest awards the participant who collects the widest variety of herbs and the other for who can make the best dish with them. Last year's winner collected a total of 150 different herbs. Meanwhile, the best dishes will be judged by a grand jury including Ayhan Sicimoğlu. The winners of this year's festival will be gifted cookbooks and last year's winners will have the chance to taste the top dishes from all previous four festivals on Sunday morning. Last year's winner prepared a sand leek halvah. A dish of baby octopus on a bed of golden thistle dressed in a butter lemon sauce came in second place and in third was a green almond olive oil dish. Meanwhile, as these events ensue, Alaçati's popular restaurants host stands presenting their take on the region's traditional herb dishes.
Sunday afternoon will also have a chorus performing Aegean folk songs in the old market square. Painting, sculpture, ceramic and photographic exhibitions will be held on themes involving the region's indigenous herbs. There will also be a series of workshops held on the sidelines teaching felt production and papermaking, as well as the art of olive oil tasting in addition to the offering of a series of activities for children centered on the festival's theme of preserving tradition and culture.

Two-hundred stands will be set up by locals in the mosque square selling local greens and their creations with them, which include, mustard greens, mallow, sand leek, blessed thistle, chicory, wild radish, blueweed and fennel, which is the herb spotlighted at this year's festival. The festival provides the perfect opportunity to visit one of Turkey's most popular and picturesque summertime destinations during the refreshing spring months when you can catch a glimpse of local life in a town, which is inhabited by glitzy crowds and paparazzi in the summer. I assure you, touring the town's colorful and flower-adorned streets and beautifully preserved stone buildings while catching a glimpse of Turkish artistry and creativity at its finest, will be an event you will never forget.