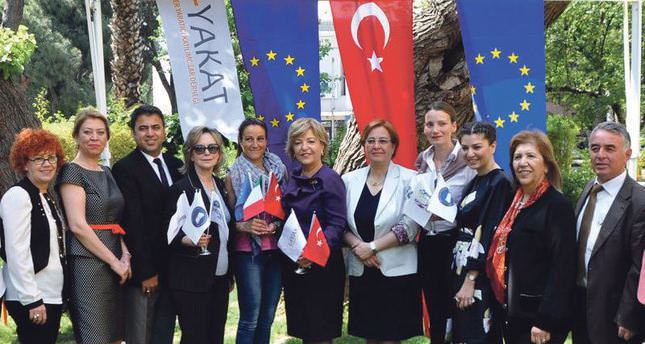 by AA
Apr 28, 2014 12:00 am
IZMIR — The '4women' project, which is part of the Ministry of European Affairs Fund Program for Strengthening Local and National NGOs on Prevention of Domestic Violence against Women, focuses on domestic violence against women in Italy and Izmir with the intention of improving economic conditions for vulnerable women.

The project is being conducted under the Dokuz Eylül University Social Sciences Faculty in collaboration with the District Municipality of Konak, the Association of Leader Creators (LIYAKAT) and Italian nongovernmental organizations (NGO) ARCUS and Work in Progress. Speaking during the kick-off meeting, LIYAKAT Chairman Berkay Eskinazi drew attention to domestic violence against women as one of the significant problems of our century.

It has been reported that 89 percent of women in Turkey have suffered from at least one type of violence, including honor killings.
The current view becomes more problematic when verbal and emotional violence is taken into account.

Eskinazi pointed out that prevention of violence against women might only be possible with the participation of all stakeholders.

The LIYAKAT's project "Ekmek Pisti Haydi Sofraya" (Bread is out of the oven, let's eat) offers permanent employment for these women.

Eskinazi added: "These women have been clinging to life by means of various programs for two years.

There are many fellow institutions that will join us. Our biggest hope is to prevent domestic violence."

Professor Canan Balkır at the Dokuz Eylül University European Union Studies indicated that they are conducting various EU projects and added that sexual abuse against women is between 17-18 percent in Turkey. Data indicates that in lower-income groups sexual abuse is 49.9 percent, while the figure drops to 28 percent in high-income groups. The education level does not seem to be an influential factor in preventing sexual abuse.

Balkır added that a woman is not just a mother, wife or daughter, but also a "human."

Konak District Mayor Sema Pekdas stated that NGOs are playing a crucial role along with international agreements and amendments to legislation. Following the promulgation of "Bütünsehir Yasası" (Whole City Bill), new positions will be opened in municipalities.

In this respect, Pekdas called for the founding of a "Directorate of Women and Family Services." She pointed out the need to create new mechanisms and the significance of cooperating with NGOs.

Work in Progress' representative Sara Petito said domestic violence has become a serious problem in Italy, adding that Italian laws are sufficient to protect women, yet do not include any article related to the culture of violence or any relevant training in schools.

It was suggested that children should take courses on gender equality and sexuality. Similar courses are offered around the world.

Established in 2006, ARCUS is located in the Italian cities of Carpi and Polpenazze del Garda.