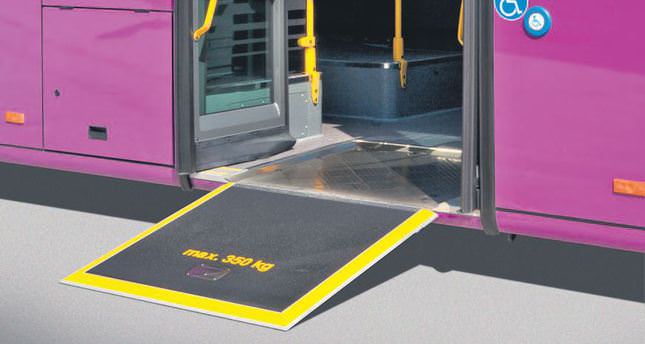 ISTANBUL — Using public transportation is a daily struggle for many people with disabilities. In cooperation with different ministries, the Istanbul Metropolitan Municipality (İBB) has made public transport more accessible for almost 500 individuals with disabilities over the last 10 years. Pursuant to a law enacted in 2005, municipalities and other public institutions have been allowed a 10-year period, which ends end on June 7, 2015, to designate disabled areas in parking lots, sport centers and other public facilities.

In order to ensure access for all passengers, nearly every vehicle in the İBB fleet has been installed with wheelchair ramps. New vehicles added to the Istanbul Electricity, Tramway and Tunnel General Management (İETT) fleet have accessible ramps as well. The İBB purchased 201 busses in February with special units where people can charge their power wheelchairs.

First started in 2012 with the fund granted by the Istanbul Development Agency, the İETT's project "Information System for Disabled People" facilitates the access of individuals who are visually impaired. Now, when public busses arrive at a bus stop, the bus numbers and routes are announced. Visually- impaired people can now differentiate the bus numbers without any help.

Also, in order to easily find pedestrian crossings, overpasses, bus stops and traffic signs, the İBB installed brailed maps and plates. To make crossing streets easier, there are accessible pedestrian signals placed in different locations. When the crossing button is pressed, a specialized system informs the passenger whether to cross the street or not. The system also counts the seconds left before a traffic light changes. Smoothly- functioning elevators, wheelchair ramps and routing signs are placed at the entrance of metrobusses and subways. Apart from custom-made turnstiles, information signs are available for people with hearing disabilities at the bus' doors. People can access elevator doors through ramps without having to use the stairs. Audio-visual information is available inside the elevators and assuming an individual qualifies, public transport use is free-of-charge.