Istanbul cleans up its act 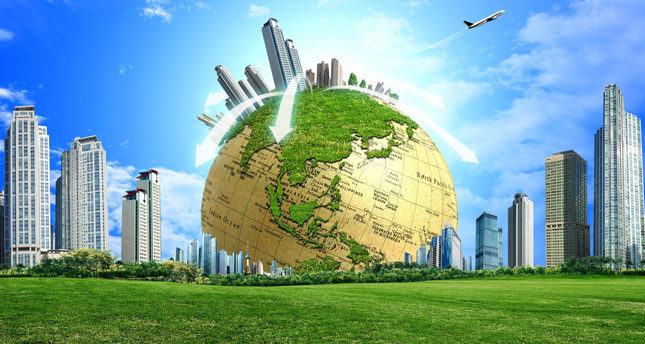 by Alanur Aydemir May 09, 2014 12:00 am
ISTANBUL — The current world population, as it stands, is approximately 7 billion, of which 75,699,825 of them reside in Turkey, making Turkey the 18th largest country by population in the world. With that many people of different beliefs, ethnicities and differing opinions living and breathing on one planet there are bound to be misunderstandings and consequences for the planet.

The industrial revolution brought about a shift in population. People moved from rural areas to cities, as developmental changes in agriculture, manufacturing, mining and transportation increased. Along with global industrialization and population increase, waste production also increased, having a direct effect on the environment. Humankind's instinctive response to disposing rubbish has been to bury it, but in time, that too became threatening as greenhouse gases emanating from landfills in the form of methane gas started having a negative effect on the environment. A lack of care in waste management and handling can lead to the spread of dangerous infections like Hepatitis B and AIDS.

Hiding the evidence by burying it was considered to be backwards, and a new solution had to be found for the very rapidly filling landfills and incinerators that were posing a threat to the environment. It was only a matter of time before man came up with more creative solutions to waste management.

Istanbul's waste management system till now, was rather poor. Garbage was often dumped in the seas around Istanbul. It wasn't until 1953 that dumping garbage was banned and a law prohibiting this act was introduced. However, the introduction of a law doesn't necessarily mean that the law will be enforced.

The act of dumping garbage continued well into the 1980s. It wasn't until the 1993 that all the accumulated garbage finally showed the impact it had on the environment. A methane explosion erupted in Ümraniye, killing 37 people. It was in 1994, as a result of this horrific accident that waste management rules became much more stringent, and the Istanbul Environmental Protection and Waste Materials Recycling Industry and Trade Company (ISTAC) was founded. The objectives were the regular storage and removal of urban garbage, the incineration of medical garbage, the planting and care of trees, seedlings and flowers and the establishment of related facilities.
In 2007, the country's waste management services were reported to have been the areas in which Turkey had significantly advanced, though there was still much room for improvement.

The EU has reported that people throw away 40 million tons of waste, excluding agricultural waste, each year. At this rate, waste disposal is expected to increase by 65 percent until 2020. In order to reduce the size and severity of the problem Yüceler, a recycling company, signed a contract with the district municipalities. Yüceler is an Istanbul- based recycling company that sources and gathers paper, metal and plastic. The material is then resold to manufacturers locally and abroad. As a result of recycling and the money involved, waste collectors have come about. Waste collectors wander around with a hopsack and collect garbage from particular points, collecting recyclable products such as metal, glass, paper and plastic to resell to recycling plants and earn an income. There are currently approximately 200,000 waste collectors, ranging from men and women to children who usually come from a lower socioeconomic class and collect in more upperclass neighborhoods. In Bağcılar, for example, recycling one ton of waste costs an average of TL 80, including transportation, facility rental and personnel costs; In Eyüp, however, this figure rises to between TL 500 and TL 700 per ton, according to official statistics. Meanwhile, other municipalities such as Bahçelievler, Gaziosmanpaşa, Pendik and Ataşehir said they had no cost-perton calculations because they have agreements with contracted firms that conduct the recycling activities for free, but keep all the revenue.
In 2013, with the hope to further advance the recycling sector in Istanbul, the 10th International Recycling Environmental technologies and waste management trade fair was established. It brought together 200 of the world's leading thinkers and practitioners from science, policy and enterprise communities.

The purpose of the conference was to produce a platform for researchers and practitioners to exchange emerging ideas and investigate key issues, such as recycling and reuse concerns, advanced wastewater treatment, membrane technologies for recycling and reuse, advanced oxidation technologies, waste reduction, water and wastewater management, solid waste treatment and management, hazardous waste management, resource use, renewable energy technologies, current and future recycling markets, public health issues and laws and policies concerning recycling and reuse. This year the conference will take place in Istanbul at the TÜYAP Expo and Congress Center Istanbul, Turkey on June 12, 13, 14, 2014. It will focus on topics such as:

-Membrane technologies for recycling and reuse

-Laws, policies and management of recycling and reuse

Solid waste treatment for recycling and reuse Though Istanbul, Turkey has come a long way in waste management and recycling, much can still be done. It falls on each individual to do their part to help the environment.