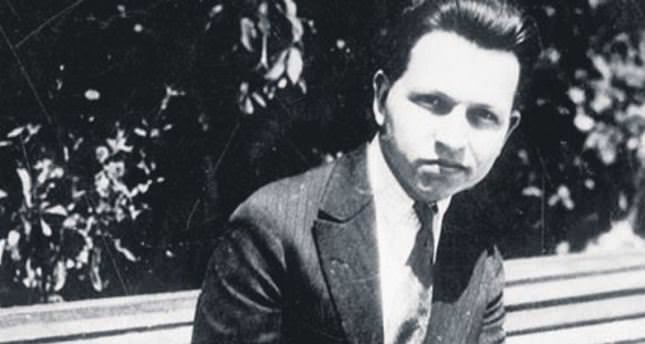 by Hakan Arslanbenzer May 17, 2014 12:00 am
Nurettin Topçu (1909-1975) was perhaps the most important Turkish philosopher living in the 20th century. Unfortunately, he was not allowed to teach in a university though he had received his PhD at Sorbonne University, then seen as the top step of the ladder of philosophy education. Topçu is known for his "philosophy of action" which depends on the "ethics of revolt."

Early life Osman Nurettin Topçu was born on Nov. 7, 1909, in Istanbul. His ancestors on his father's side were from Erzurum, a historic city in the eastern region of Turkey. The family was called "Topçuzade," meaning "son of the artillerist." Topçu's grandfather was in the Turkish army as an artillerist when the Russians occupied Erzurum, an eastern Anatolian province. The family was named after him. Topçu's father, Ahmet Efendi, was a grain seller in Erzurum.

Later he moved to Istanbul in order to earn a living by sheep trading. He earned enough money to buy the Erzurum Han, a commercial building in Tahtakale, which was then the center of trade in Istanbul. Thus, Nurettin was born to a relatively rich family. However, later his father's job collapsed, and he suffered a bankruptcy. So, he ended sheep trading and opened a butcher's shop.

Nurettin was born from Ahmet Efendi's second wife Fatma Hanım. When young Nurettin was going to high school, his father died. After that he would dedicate his life to his mother and grandmother.

Topçu was always educated in elite schools since his family tried their best to support him. His schoolmates confessed that he was a brilliant student who never took a break from reading. He did not make many friends. His schoolmate Sırrı Tüzeer once said, "Nurettin was not sociable, and I was his only friend in secondary school."

Significant notes about Topçu as a high school boy include the fact that he adored Mehmet Akif (1873-1936), a great Turkish poet and national hero, that he had a strong personality and that he began praying under the influence of his teacher of religion, Şerafettin Yaltkaya (1879-1947), a professor of religion and second chief of the Department of Religious Affairs of the Turkish Republic.

After graduating from Istanbul High School, Topçu received a scholarship and went to Paris, France, in order to study Western philosophy. In Paris, he met some right-wing Turkish intellectuals, including Ziyaeddin Fahri Fındıkoğlu and Remzi Oğuz Arık, who influenced Topçu with regard to Turkish nationalism, especially the Anatolianism ideology. Hüseyin Avni Ulaş, an Islamist politician who participated in the first Turkish National Assembly during the War of Independence, was also a major figure who had an influence on Topçu.

However, Turkish influences on Topçu were not as strong as that of Maurice Blondel (1861-1949), a French philosopher whose most influential works, notably "L'Action," aimed at establishing the correct relationship between autonomous philosophical reasoning and Christianity. Topçu was going to Lycée de Bordeaux when he met Blondel. Correspondence between the two affected the young but enthusiastic student, and he began thinking on the philosophy of action and revolt. Blondel can be said to be the true master of Topçu in philosophy.

Topçu never criticized Blondel and even sometimes acted as his translator. Nevertheless, Topçu's "ethics of revolt" cannot be said to be a simple copy of the l'action philosophy of Blondel. The ethics of revolt is both a mystic understanding of Islam and also a basis for a national movement depending on Anatolianism.

Topçu graduated from Lycée de Bordeaux and Strasbourg University before his PdD study at Sorbonne University. Topçu is the first Turk who received a PhD in the discipline of philosophy at Sorbonne. In 1934, he gave his PhD. dissertation titled "Conformisme et Révolte" (Conformism and Revolt), which unfortunately would not be translated into Turkish until 1995 under the title "İsyan Ahlakı" (Ethics of Revolt).

After his return, Topçu met Abdülaziz Bekkine (1895-1952), who was a charismatic leader of the Naqshbandiyya order in Turkey. Bekkine is said to have had a great influence on Topçu's shaping of his mature philosophy. He became a disciple of Bekkine in Sufism. Meanwhile, Topçu was teaching philosophy at Galatasaray High School. He married Hüseyin Avni Ulaş's daughter Fethiye Hanım. Yet, after a quarrel with the school principal, Topçu was exiled to İzmir Atatürk High School.
RELATED TOPICS