Adnan Menderes: May, the cruelest of months 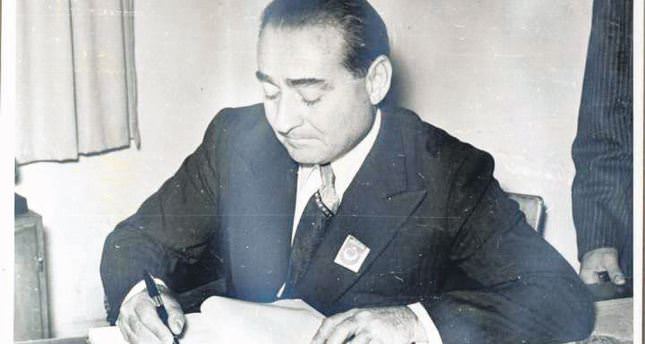 by Hakan Arslanbenzer May 31, 2014 12:00 am
In his monumental poem "Waste Land," English poet T. S. Eliot wrote, "April is the cruelest month." The great poet meant that spring comes with confusion; life costs death. In Turkey, modern democracy depending upon multi-party elections came in May 1950; however, a decade later, in May 1960, the military overthrew the ruling party and imprisoned hundreds of people including Prime Minister Adnan Menderes, who would be executed on Sept. 17, 1961. This has been the darkest moment of the history of Turkish democracy.

Adnan Menderes was born in Koçarlı, Aydın, an Aegean town of Turkey, in 1899. He was the son of İbrahim Ethem Bey and Tevfika Hanım. His father İbrahim Ethem was a wealthy landowner.

The origin of the Menderes family can be traced back to Crimean Tatar ancestors. His grandfather Hacı Ali Paşa moved from Konya and settled in Tire, İzmir.

Menderes was schooled in İzmir. An interesting anecdote is that he played football for two İzmir clubs, Karşıyaka and Altay, before World War I. He played as a striker in Karşıyaka and as a goalkeeper in Altay.

After World War I began, Adnan was trained as a reserve officer. However he couldn't go to the front because he suffered from malaria.
Greece occupied the Aegean region of Turkey when Menderes was 20 years old. This time he was healthy enough to help and fought against the Greek invaders. He was awarded a medal of honor given to the soldiers who fought in the War of Independence.

Adnan Menderes married Fatma Berin Hanım from the Evliyazede family, another wealthy family of İzmir. The Menderes couple had three sons, Yüksel, Mutlu and Aydın. Their names are interesting. Yüksel means "rise!" while Mutlu means "happy." The youngest son Aydın's name has two meanings; one is the name of Aydın province, where his father Adnan was born, and literal meaning of Aydın is "enlightened" or "intellectual."

After the war ended and the Turkish Republic was founded, Adnan entered politics. In 1930, he formed the Aydın branch of the shortlived "Serbest Cumhuriyet Fırkası" (Liberal Republican Party). After Serbest Fırka was closed by Fethi Okyar, the party chairman, Menderes was invited by Mustafa Kemal to join the ruling Cumhuriyet Halk Fırkası (Republican People's Party).

Adnan Menderes was selected as deputy of Aydın in the Turkish National Assembly in 1931. While acting as a deputy, he also attended law school in Ankara University and graduated in 1935.

İnönü-Menderes: "Never the twain shall meet"

In 1938, Mustafa Kemal Atatürk died and İsmet İnönü became the president of Turkey. Since Atatürk had a unifying charisma, his death made the opposition voice itself even louder. Adnan Menderes had never been a standard CHP deputy. He had different ideas and feelings compared to other politicians in the single party regime like İsmet İnönü.

In 1945, Menderes and three of his friends including Celal Bayar, Mehmed Fuad Köprülü and Refik Koraltan gave a proposal named "Dörtlü Takrir" (Memorandum of the Four) to the CHP party group leadership in the Turkish National Assembly in order to be negotiated in the group meeting. "Dörtlü Takrir" was a manifesto of liberal democracy. The manifesto included such items as that it was not right to continue the restrictions of the regime, recognition of the constitutional freedoms and rights, and "a wider application of democratic methods."

This manifesto was seen as rebellion by İsmet İnönü, and the party deputies voted to expel the three deputies, Adnan Menderes, Refik Koraltan and Mehmed Fuad Köprülü, while Celal Bayar resigned from both the Parliament and CHP membership. This was the beginning of the multi-party race.

At the end of 1945, the four politicians, who were previously expelled and resigned from Parliament and the ruling party, founded a new party called the Democrat Party. This was a critical event since it started the İnönü-Menderes race which represented the left-right or statism-liberalism struggle.

The race between İsmet İnönü and Adnan Menderes is typical because of the social meaning of their political attitudes. İnönü was coming from a bureaucratic background and he was a strict statesman who underestimated the people's expectations. For İnönü, the state was the only cause and the only goal. He was cruelly statist. On the other hand, his methods as a politician show his ambition for ruling. In his mind, the state consisted of him and his party environment. No others would rule.

Adnan Menderes had never been in the Turkish bureaucracy. He was a landowner with a higher education. He was a freeman to some extent. He also believed in the goals of the Turkish Republic as drawn by Mustafa Kemal. If İnönü could be called a left-Kemalist, Menderes would be a right-Kemalist.

"Enough! Word is the People's!"

İnönü announced a great victory in the 1946 elections, in which the CHP used state power in order to collect votes. People were obliged to poll their votes openly. Ironically, the votes were counted in secrecy. No one could guess the real results of the 1946 elections.

On May 14, 1950, this time Menderes and the Democrat Party won the election. Some people refer to this date the "Democracy Revolution."

After the elections, Menderes rapidly enacted his policies including liberalizing the economy and social life including religious affairs. Adhan was read in Turkish during the single-party regime period, which annoyed Muslims. Menderes freed the original adhan, which was always fresh in the memories of Turkish people.

Menderes tried to integrate Turkey with the Western world. Turkey entered joined the NATO and took part in the Korean War. Menderes also led the way to establish CENTO, a pact of Middle Eastern countries with Muslim majorities. Menderes' liberalization policies allowed sustainable economic growth. This also helped him win the 1954 and 1957 elections.

After 1958, opposition against the Menderes rule became stronger. Students and university professors held meetings against the government.

The violence was not intense but the events were exaggerated by the press. Cemal Madanoğlu's junta, which was supported by İsmet İnönü, exploited the situation and carried out a military coup on May 27, 1960. This was the beginning of the end for Adnan Menderes.
RELATED TOPICS