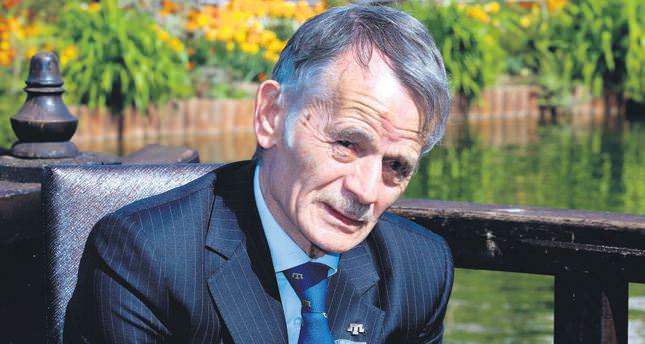 Mustafa Abdulcemil Kırımoğlu, leader of the Crimean Tatars, strived for the welfare of his people throughout his life. He has faced various troubles during his life-long struggle; exile, imprisonment and much more...

Mustafa Abdülcemil Kırımoğlu (also known as Mustafa Abduldzhemil Dzhemilev) has spent life as an activist for freedom of his fellow Crimean Tatar people. He is the former chairman of the Mejlis of Crimean Tatar People and recognized as the moral and political leader of the Crimean Tatar national movement.

Abdülcemil Kırımoğlu was born in Ayserez (Mizhrichchya), Crimea on Nov. 13, 1943. He was only six months old when Soviet troops started the Tatar deportation from Crimea as ordered by Joseph Stalin, the totalitarian leader of USSR then. The little Crimean Tatar boy grew up in exile in Uzbekistan like myriads of others from his nation.

Indeed, deportation was a punishment to the Crimean Tatars personally ordered by Stalin. The "Man of Steel" accused the whole nation of being Nazi collaborators during the German invasion in the World War II. So, every Crimean Tatar should be punished. In May 1944, about 230,000 Tatars, which comprised 20 percent of the entire Crimean peninsula population at that time, were deported to Uzbekistan.
More than 100,000 of the deportees died in exile because of reasons like starvation and contagious diseases.

During the deportation little Mustafa was with his mother only. His father was kept in prison with other Crimean Tatar men by Soviet troops in order to avoid a Tatar rebellion against the deportation. The family was deported to Andican, Uzbekistan.

Mustafa's little sister Dilara was born in exile with their early years passing in a village in Andican. In 1955, the family moved to a small town in the neighborhood of Tashkent.

Deportation killed myriads. However, for the survivors, exile was not easy either. Mustafa Abdülcemil, after completing high school in Russia, applied for the Arabic Department of Tashkent University. He was rejected saying, "We do not accept traitors here in this faculty." After such rejection, Mustafa Abdülcemil began to work in a factory in Tashkent.

Making of a dissident

Kırımoğlu was a Soviet dissident from the beginning. Did he have any other chance? Under exile, the Crimean Tatar youth was obliged to obey the Soviet understanding of Crimean Tatars as traitors. In other words, to become a loyal Soviet citizen you had to betray your own people. Mustafa Abdülcemil was not a young man who would do that. He attended in the formation of the "Crimean Tatar Youth Organization" in 1961 together with his friends. A few weeks later, the leaders of the organization was arrested while young Mustafa Abdülcemil was fired from his work.

However, KGB agents obliged the director of the Institute to dismiss Mustafa Abdülcemil from school for the reason that he wrote and published an article about the 12th to 17th century of Turkish civilization. After dismissal he was called to the Red Army but he refused to join them. So, he was tried in court and imprisoned for 18 months.

Mustafa Abdülcemil Kırımoğlu is of the '68 generation as much as possible for a Soviet dissident from the Crimean Tatar origin. He was among a small group of intellectuals in Moscow protesting the invasion of Czechoslovakia by Soviet troops in 1968. This cost him another imprisonment for treason. He spent three years in prison with Ilya Gabay, a key figure in the civil rights movement in the USSR. In those years, Piotr Grigorenko, a former Soviet general, Ilya Gabay and Mustafa Abdülcemil Kırımoğlu were struggling for the Crimean Tatar autonomy. Gabay and Kırımoğlu were imprisoned while Grigorenko was put in asylum for a period of five years.

As years passed, conditions were becoming tighter for the dissidents in the Soviet Union. Kırımoğlu was imprisoned again in 1974 for another three years. In total, he was imprisoned on six occasions. His fame as a civil rights and Crimean Tatar autonomy activist grew with each imprisonment. Vladimir Bukovsky, one his friends from prison, said, "Mustafa was a true legend."

Indeed, many human rights activists from the USSR and the West contributed to the legend of Mustafa Abdülcemil Kırımoğlu. Andrei Sakharov, famous Russian nuclear physicist who was awarded the Nobel Prize for Peace in 1975, made an announcement defending Mustafa Abdülcemil Kırımoğlu as he was carrying a hunger strike in the Soviet prison. In his announcement, Sakharov addressed to the UN General Secretary Kurt Waldheim and the leaders of the Muslim countries as follows: "We have no chance to defend Mustafa officially. They are trying to kill him by extending his imprisonment period.

In order to protest this situation, he started hunger strike though his health condition was not sufficient. I beg you. So, please save Mustafa."
Last Update: Jun 14, 2014 1:37 am
RELATED TOPICS