Rowing: A sport of balance and harmony 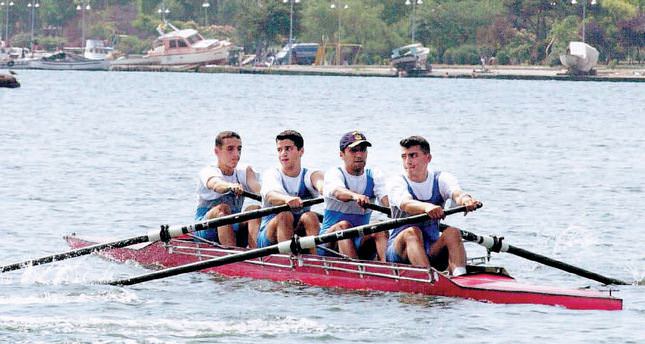 Rowing amid Istanbul's historic view is not only great for the body, but also therapeutic for the soul

As the hot days of summer are upon us in Istanbul, it seems the best time for rowing in the chilliness of early morning waters. You experience more than sport if you have a chance to row along the Golden Horn, the most beautiful landmark of İstanbul when the city is still sleeping. One of the oldest sports, rowing became widespread in the Ottoman Empire from the 16th century when the Ottoman navy achieved an important position as an imperial nation. As a part of urban life, the Ottomans used to organize rowing competitions.

Later, boats became an indispensable transportation means for Istanbul residents while crossing the Bosphorus. Upon the foundation of the Turkish
Republic, rowing started to be done at certain registered sports clubs such as Fenerbahçe, Galatasaray and Beşiktaş.

Nowadays, the number of rowing clubs at the Golden Horn and Bosphorus has gradually dropped mostly due to water contamination and busy Bosphorus traffic. However, rowing junkies set off at early hours in the morning to enjoy the spectacular landscape. It is really tempting to do rowing in Istanbul which is one of the world's greatest cities boasting very unique scenery. Sports devotees flock into existing rowing clubs no matter how bad the weather is.

Rowing is not only entertaining, but also one of the most difficult sports. Leg muscles exert roughly 70 percent of the effort, while arm muscles give 30 percent while rowing. In addition, leg muscles are important for rowers to push themselves back and forth while sitting on movable seat pads in the boat. Apart from leg and arm muscles, rowers should use their shoulders efficiently, which makes it one of the best cardio sports and highly recommended for burning excessive fat.

Rowing not only requires team work and endurance, but also balance and concentration. Rowers get in special boats to compete with their rivals either on sea, lake or river. There are three main types of row boats, which include yoles, canoes and outriggers. The teams are divided into different categories in terms of their number and whether there is any steersman and set out to row against the incoming tide.

In canoeing, the rowing technique is the opposite and paddles are not connected to the boat. An ideal boat should be between 8.2 and 19.9 m in height and between 29.2 and 62.2 cm in width. There are movable seats made of either wood or plastic in the boat. Rowers attach their feet to their boat via shoes fixed to a metal plate in the boat. The movements required for rowing are basic back and forth strokes; however rowing is a demanding sport requiring extreme endurance in the long term. Team management is necessary to put rowers into the water at the same time otherwise the boat's direction and balance can easily be distorted. It is advised to start professional rowing at the age of 12 however everyone can do this sport without any special skill or physical conditioning.

Rowing training generally starts at 6:00 a.m. or 6:30 a.m. therefore it might be an ideal choice for people who are early risers. As mentioned, the Golden Horn is one of the best places for rowing in Istanbul. The Maritime Lines situated on the Golden Horn provides excellent opportunities for rowers of all ages. Among the other recommended places are the Dams of Ömerli and Elmalı, the Caddebostan Beach, the Fenerbahçe Dereağzı Sport Center and the Küçükçekmece Lake.
Last Update: Jun 26, 2014 2:02 am
RELATED TOPICS