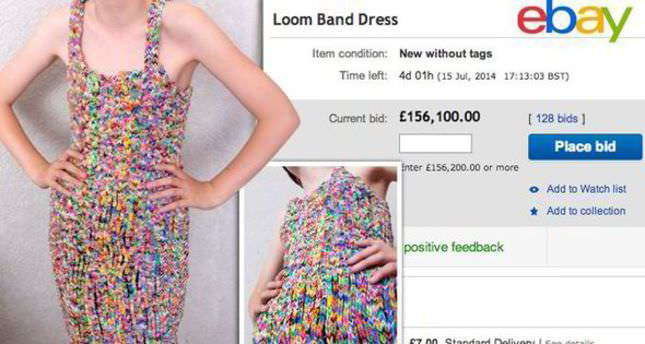 by Aug 01, 2014 12:00 am
For millions of school children they are the must-have fashion accessory of the moment. Footballer David Beckham and Britain's Prince William have sported them. Even Pope Francis has been photographed wearing a few. Loom bands - colourful rubber bands woven together into bracelets and other items – are the latest craze to sweep playgrounds everywhere from New York to Singapore.

Last month a dress made entirely from loom bands was sold on the online auction site eBay for £170,000 ($287,000, TL 615,106) and the fad has made one French couple a million-dollar fortune. Shops now sell kits and they are increasingly used to make items from key rings and phone cases to necklaces and bikinis. The craze even has its own vocabulary with designs for bracelets available on the Internet such as "inverted hexafish", "fishtail" or "dragon scale". British woman Kathryn Burnand spent three-and-a-half weeks weaving her loom band dress which was originally priced at little more than $80. But after going on eBay, it attracted bids from over 135 countries, landing Burnand and the friend who put it up for auction with a staggering windfall. Loom bands were invented in the U.S. four years ago by Cheong Choon Ng, then a crash-test engineer in Detroit, who got the idea after seeing his daughters making bracelets out of elastic bands. His loom device has sold millions worldwide and turned the Malaysian immigrant himself into a millionaire. Emmanuel and Morgane Laurencon from Brittany in northwestern France are among those who have successfully jumped on the bandwagon.

The family now have the exclusive rights to sell Ng's Rainbow Loom products in France, Belgium and French-speaking Switzerland. The couple and their four children moved to Miami in 2012 and Emmanuel became curious after he noticed his young daughter bringing the bands home from school. "Each time the family or some friends were coming from France, the girls of the same age as my daughter shut themselves in the bedroom to make bracelets for hours," he said.

The phenomenon had not yet taken off in the U.S. but the Laurencons decided that "something was going on" and resolved not to return to France "empty handed".

After they arrived back in 2013, the family garage in the Brittany town of Quimper was soon pressed into service as an office-cum-warehouse for their loom business.

"We thought it was going to grow gradually , but in fact it has grown exponentially," said Emmanuel. The Laurencons now employ six people and the business is installed on the ground floor of a small building in the centre of Quimper. Alexandra Balikdjian, a psychologist specialising in consumer behaviour at the Free University of Brussels, said it was easy to see why loom bands had taken off. "These bracelets allow us to be like the people we identify with, but at a completely low cost," she said. One young boy told AFP why he liked them.

"It's new and all my friends have one. I want one too," said seven-year-old Max.

"I really love to make them," he added, his eyes firmly fixed on one that he was making. "The children love it," said Catherine Chanat, director of a leisure centre in Arpajon near Paris. Despite their popularity, the centre has banned them because they created "jealousies and frustrations for the children that don't have them" she said. And there have been some safety concerns among parents after children wrapped them around their fingers before going to bed resulting in them turning black from lack of circulation. The Laurencons, however, are sitting pretty with an annual turnover of just over $1 million (TL 2.1 million).

The family can't quite believe their luck and say there is plenty more potential in the business. "It's the sort of thing that only happens once in a lifetime!" Emmanuel added.