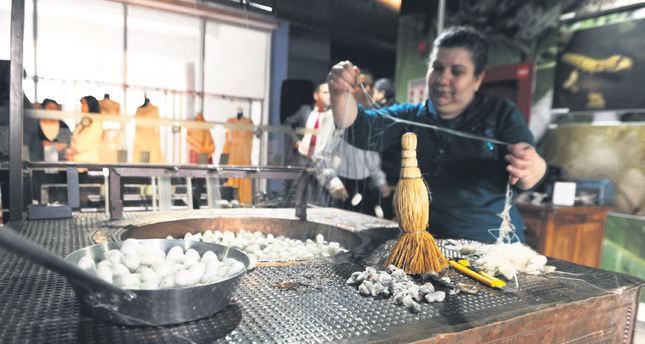 The production of silk is lengthy and requires a great deal of attention, making it a valuable commodity. It not only represents class but also knowledge that has been preserved over time

The history of silk weaving is said to date back over 4,600 years in East Asia. Known as the most precious fabric, silk was woven secretly in China for centuries. The country was mostly identified with silk weaving, which became an important revenue source. Interestingly, the secrets of silk weaving were strictly kept under wraps among the professionals. Those who attempted to share them with foreigners were charged with heavy penalties. There are many historical accounts about the great invention of silk artistry within the borders of China. The journey of silk extended to Anatolia, and attributed its name to the trade route, the "Silk Road," connecting the West with the East for centuries. When silk trade was ended, due to political conflicts among caravans, two monks, commissioned by the then Byzantine Emperor, visited China and returned with a silk worm kept inside one of their walking sticks.

This astonishing occurrence paved the way to produce silk in Anatolia. Broadly speaking, silk allowed European civilizations to become familiarized with the East. The Silk Road transferred eastern cultures, religions and ideas to the western part of the world. Silk was commonly used among aristocrats thanks to its soft and light texture along with charming and elegant look.

Later, A silk production company was established in the 19th century in Bursa. The historical "Koza Han" located in the city center was previously the main place selling cocoons. It still attracts customers looking for high quality silk. Another important silk production center is Diyarbakır's Kulp district. A large part of wet cocoon production has taken place in Kulp since 2003. Mass-produced silk is mostly exported, but also used in carpet weaving. Silk production, however, has suffered from the epidemic disease "pebrine" caused by parasites in silkworms. The disease spread across Europe in the 19th century, and when the Suez Canal was erected, silk production rates also fell down since it was possible to import and export cheaper Chinese and Japanese silk. In recent years, the ministries have provided financial contributions to Turkish silk producers to bring back those flourishing days.
Last Update: Aug 05, 2014 1:56 am
RELATED TOPICS