Officials warn over forest fires in the next 2 months 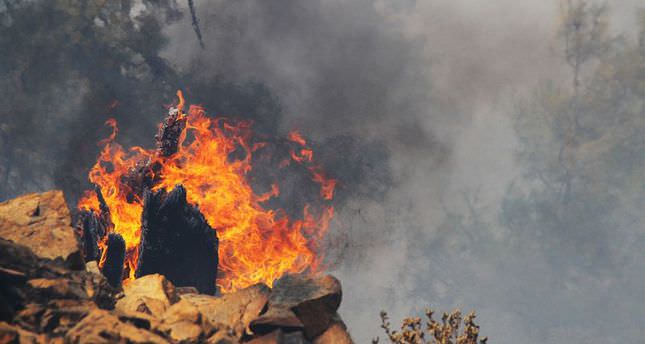 Bursa Regional Directorate of Forestry stated that 118 forest fires occurred and a 532-acre area was destroyed in 2013 in Bursa, Yalova and Bilecik. A 26-acres have been destroyed in 47 forest fires so far in 2014. The officials pointed out that the most critical months for forest fires are July, August and September, adding, "Until now, the number of areas destroyed by fire has decreased because of the high humidity and Ramadan. This decrease in forest fires should not give us false relief." They said that they will send information obtained from meteorology to the village headmen via SMS and the headmen will warn the local people by announcing from the mosques' speakers.

The officials at the Bursa Regional Directorate of Forestry said in order to prevent forest fires, they have focused on education. "We have given education to 28,502 students in 302 schools since the beginning of 2014. A public service announcement was released for a forest fire line (Alo 177) to become widespread. Thermoses were distributed to shepherds," said officials. It was noted that a safe, early and effective response is crucial in fight against forest fires. "We have 600 fire fighters, 194 technical staff member, 282 forest protection officers and additional 244 members along 40 watering carts, 12 water tanks and 18 first responder vehicles. 70 fire stations, eight bulldozers, seven graders and seven cargo gliders along with a helicopter are ready for duty. To provide water by helicopter in short distances, we have 26 fire pools. Forests are observed 24/7 from 35 towers for early response."