The legend of Sarıkız celebrated at Mount Ida 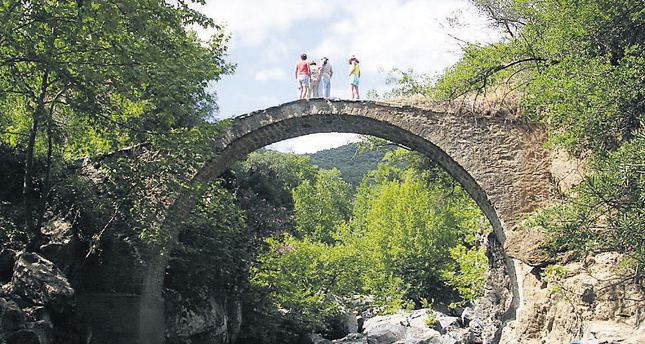 According to legend, Sarıkız, which translates as 'Fair Maiden,' was a beautiful and purehearted girl from Assos who moved to a village near Güre in the Edremit district of Balıkesir province with her father after her mother's passing

Among the villagers of Turkey's precious Kaz Dağları (Mount Ida), located between Balıkesir and Çanakkale province, there is an age-old tradition of celebrating the legend of Sarıkız, which takes place every year in the last weeks of August. If you are yet to visit this mountain range, regularly referred to as Turkey's oxygen depot, then this is the opportunity to experience Mount Ida in all its glory.

Every year, from Aug. 15 to Aug. 25, locals from the surrounding villages of the Kaz Dağları, take a very special pilgrimage to the peak of Sarıkız, to celebrate the legendary sainthood of Turkey's fair maiden.

According to legend, Sarıkız, which translates as Fair Maiden, was a beautiful and purehearted girl from Assos who moved to a village near Güre in
the Edremit district of Balıkesir province with her father after her mother's passing. One day her father entrusted her to his neighbors as he departed on a pilgrimage. Sarıkız's suitors took this opportunity to request her hand in marriage. When she turned everyone down, out of resentment, her suitors began spreading malicious rumors about her chastity. Devastated by the shame brought on his family upon his return the father decided to take his daughter and a fleet of geese to the peak of Mount Ida to leave her there to die. As the story goes, when they reached the peak, the father asked his daughter to fetch some water for him only to find that the water she brought to him up on that mountain was saltwater. He immediately sensed that something had changed in his daughter and asked her to fetch more water.

However, this time he peeked with suspicion only to see Sarıkız extend her hand all the way over the mountain to scoop up water from the Aegean Sea. Realizing his daughter had ascended to sainthood, he left her at the peak, now called Sarıkız Tepesi, and in deep despair for not having stood up for his daughter, he climbed to a neighboring peak. They were both said to be found dead by villagers on their respective neighboring peaks.

Although the story may seem to be a melancholic one, the memory of Sarıkız and her special powers is now celebrated by locals from predominantly Türkmen and Yörük villages, who gather annually on Sarıkız Tepesi (Sarıkız Hill) and Baba Dağı (Father's Hill) to share a feast and say special prayers in honor of this local legend. Most families set up camp in the surrounding mountain skirts where they sacrifice an animal, light candles and tie colorful ribbons on the stones of these special peaks, which are a central part of the mountain range referred to as Kaz Dağları, which also means Geese Mountain, in reference to this legend which dates back to the 14th century.

Previously referred to as Mount Ida, the "Mountain of the Goddess," this special forested mountain, said to have the highest oxygen ratio in the world after the Alps, has in fact been the site for many a legend. In ancient times, the mountain worshipped Cybele, an Anatolian mother goddess. Mount Ida is also where Paris, the son of King Priam of Troy, grew up as a shepherd unbeknownst of his own heritage. As the story goes, just before his birth, Paris' mother had a dream of a flaming torch, which was interpreted as a foretelling of the downfall of Troy by the seer Aesacus, who said the child would have to be killed to spare the kingdom. Unable to take the life of his own child, King Priam commissioned his chief herdsman to take on the task. Also unable to take the life of a child, the herdsman instead left Paris exposed on Mount Ida, in the hopes he would perish there. However, when the herdsman returned nine-days later, he found Paris had been suckled by a shebear and decided to bring him up himself.

Known for his honesty in judgment, the gods of Olympus chose Paris to arbitrate the divine beauty contest between Hera, Athena and Aphrodite. The latter came out the victor when she offered Paris the love of the most beautiful woman on earth, Helen of Sparta, which eventually triggered the decade-long Trojan War; a chronicle which Zeus is said to have watched from the peaks of Mount Ida.

Paying a visit to this very special stretch of nature, and especially at this time of year, is a unique opportunity to experience the land's colorful history and beautiful flora and fauna, all amongst magnificent views of the Gulf of Edremit from an elevation of 1,784 meters.

Currently a modest 21,452 acres of Mount Ida are under the protection of the Kaz Dağı National Park, created in 1993. There are a number of ways to visit the national park, where both the Sarıkız and Baba peaks are located. Special permission to enter the park is granted by the Mount Ida National Park Zeytinli Information Center and visitors in private cars are required to be accompanied by a local guide. Entry to the national park is 15 TL per vehicle and hiring a guide, some of which speak English, costs 80 TL.

The Kaz Dağı Center offers insightful information through a short film screening about Mount Ida and also has a display of the 31 endemic plants in the area. There are over 800 plant species overall and 48, which are native to Turkey. The forests are also inhabited by grizzly bears, roe deer and wild boar.

A popular way to visit the region is to take a jeep safari tour, offered by both Kazdağı Tur and Demre Tur, while Gayem Tur and Edro Tur offer bus tours of the Kaz Dağı National Park. Tours take off from the nearby popular summer destinations of Akçay and Altınoluk.

A definite must if you are anywhere near the area is to pay a visit to the Tahtakuşlar Village Ethnographic Gallery, located in a picturesque Turkmen village on the skirts of the Kaz Dağları. This unique museum provides a look into a slice of life of Turkey's nomadic Yörük and Turkmen and contains artifacts and landscape models that provide further introspection into the Sarıkız legend. In addition to displaying a vast collection of books, artifacts, jewelry, tools, textiles and a nomadic tent, this special museum also houses the world's largest leatherback turtle. It also sells a variety of medicinal oils and herbs and is absolutely worth a visit.
Last Update: Aug 23, 2014 1:53 am
RELATED TOPICS