Hollande tried to win me back, says ex in tell-all book 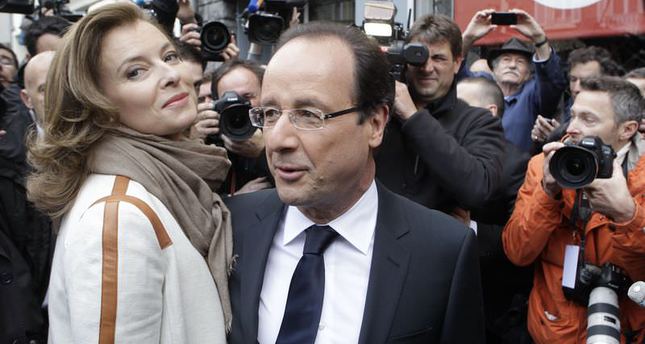 by Sep 03, 2014 12:00 am
French President Francois Hollande's former companion writes in a tell-all book, due to be released on Thursday, that months after their public breakup he was trying to win her back with flowers, dinner invitations and barrages of text messages.

Valerie Trierweiler, a journalist for glossy magazine Paris Match, lived with Hollande at the Elysee presidential palace for a year and a half until a gossip magazine exposed his secret relationship with actress Julie Gayet, 42, in January.

After her breakup with the president, Trierweiler, 49, granted interviews and kept up a weekly literary column.

But her 320-page book - written in secret- describes as yet unknown episodes including how Hollande tore a bag of sleeping pills out of her hand when she tried to swallow them during their breakup, according to excerpts published by Paris Match.

Trierweiler also writes of her own "uncontrollable" jealousy toward Segolene Royal, the woman with whom Hollande had four children over quarter of a century and who is now a minister in his government.

She also speaks of coldness and mean-spirited stabs, and of his attempts to win her back after their breakup by sending up to 29 text messages in a day.

"The news of Julie Gayet was on the morning news," reads one excerpt of the book, titled "Thank you for this Moment".

"I run into the bathroom. I take the little plastic bag containing the sleeping pills. Francois follows me. He tries to tear away the bag. (...) He catches the bag, which tears (...) I manage to gather up some of them. I want to sleep, I do not want to live the hours to come."

She was briefly hospitalised at that time.

Olivier Royant, editor-in-chief of Paris Match, said on BFMTV that Hollande only became aware of the book on Tuesday. The president's office had no immediate comment.

His allies rushed to contain any potential damage to Hollande, who is the most unpopular president in France's postwar history and is struggling to shore up an economy plagued by unemployment at more than 10 percent, near record highs.

Agriculture Minister Stephane Le Foll, a friend of Hollande's, said the country had more important issues to deal with than the president's private life.

"We have enough serious, weighty issues," he told the French digital channel i>Tele. "We haven't got a lot of time, so we can't afford to lose it."

But, asked whether being in office had changed Hollande, as Trierweiler alleges in her book, Le Foll added: "It's true that the presidential role is a burden, a responsibility before the French, which is exceptionally weighty."

Claude Bartolone, the Socialist speaker of parliament, told BFMTV that he would not read the book and was no supporter of "paparazzi politics".

Right-wing opponents, while also saying they would not read the book, said the excerpts offered insight into the personality of a president often accused of being aloof and indecisive.

"Clearly, in this case, beyond his private life this is about the temperament of a man whose cynicism and whose indifference are worrying," said Brice Hortefeux, a member of the centre-right UMP opposition and former interior minister.