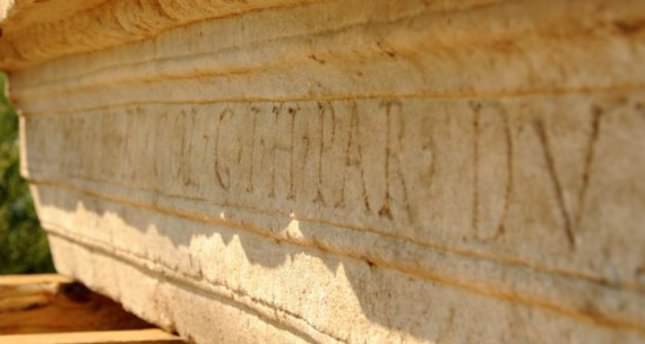 by AA Sep 06, 2014 12:00 am
A 2,200 year-old tablet was found in the ancient city of Parion, the most important port city of the period, which is situated in Kemer village of the Biga district, Çanakkale. The discovery revealed that the region housed one of the most magnificent Roman-era colonies. According to the information gathered by Anadolu Agency (AA) reporter, this year's Parion excavations is being carried out in the southern necropolis, theatre, odeon (an ancient stage), Roman bath, hillside and drilling buildings. This year, the officials plan to finish the archeopark project concerning the early Byzantine chapel that was discovered in previous years. The head of the excavations and Atatürk University Associate Professor Vedat Keles said this year's excavations are nearly finished. Sponsored by IÇTA (Steel, Energy, Shipyard and Transportation Inc.), this year's excavations in the ancient city have contributed important insights into the region's history.

Keles said that although they started 15 days later than planned, the 10th year excavations have been very fruitful. A team of 60 technicians from seven different universities and additional 70 workers discovered important findings including the 2,200-year-old tablet that was found near the theatre. Keles emphasized these new findings confirm that Parion was one of the most magnificent colonies of Rome. He pointed out the importance of the existence of a colony in a city, and said this gives serious insights about its economic, military and architectural activities. Parion was a city that was colonized twice; once by Hadrianus and once by Augustus'. The latest discoveries near the theatre revealed that Parion Ancient City was much bigger than it was previously thought. The odeon of the city had a capacity of 200 people, marking it the biggest in Anatolia. Moreover, the stage of the theater is a three-story building with a capacity of five or six thousand people. During the previous excavations in the ancient city, 260 ancient artifacts including a golden crown with oak leaves, golden earrings with Eros figurines and golden stamp were discovered. Furthermore, four tombs, 60 graves and golden ornaments belonging to the Persian period along with a thoroughfare and surrounding buildings, a necropolis, an ancient theatre and a palace were discovered in the region.