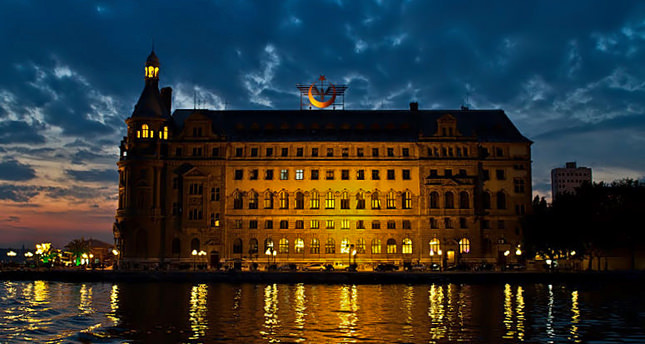 by AA Sep 06, 2014 12:00 am
"Currently, with the development of high speed trains, there is no need for Haydarpasa to be used as a train station anymore. If it becomes a hotel, it will be well-preserved and cared for by the private operator." Not everyone shares the opinion of Fatih, a 32-year-old banker, regarding the fate of Istanbul's historic Haydarpasa Railway Station, located in Kadıköy; most notably the district's mayor. "The Kadıköy municipality has rejected the building permit application of the General Directorate of Turkish State Railways for the inspection, restitution and restoration of Haydarpasa," Mayor Aykurt Nuhoglu said at a press conference on Wednesday. "It is impossible for us to support a restoration project that includes additional construction to the historic building," said Nuhoglu.

The mayor argued that Haydarpasa should be used as a train station once again, with its surroundings which exhibit cultural and natural places where people can socialize.

Following his statements, the State Railways of the Turkish Republic (TCDD) issued a press release saying all the official permissions needed to restore the building had already been obtained. "All state institutions and organizations as well as municipalities and individuals have to follow the decisions taken by the Culture Ministry's Supreme Board on the protection of cultural and natural assets in Turkey," the statement said, essentially meaning that the mayor's rejection of the projects was invalid. Haydarpasa was built 106 years ago during the reign of Ottoman Sultan Abdülhamid II. It has long stood as the symbolic gateway to the city on the Asian side near the Bosporus. In 2010, a fire severely damaged the central and northern parts of the Haydarpasa station's roof.Restoration of the building immediately followed.

The station, operated by the General Directorate of Turkish State Railways, was then closed in January 2012 to allow for the construction of a high-speed line between Istanbul and Ankara. Since then, there have been claims that the historic building - occupying an area of around 92,000 square meters in Istanbul's Kadıköy district - will be turned into a luxury hotel or a shopping mall. "Haydarpasa is the memory of Turkey, as well as an industrial heritage, and the breathing corridor of the city," he added stressing that there were already quite a lot of shopping centers around the city and that there was no need for another. He also criticized the fact that the public were not informed enough about the projects concerning the station. "The restoration work on Haydarpasa will be appropriate for its architectural structure and original form. There will be no additional construction," an official from the state railways, who wanted to remain nameless, told Anadolu Agency (AA). According to the plan, Haydarpasa will be used as a train station and a place for cultural activities, continued the state railways official. "The station will continue to exist in its original form as it is the jewel in the crown," the official stressed. Turkish State Railways had claimed earlier that the entire project had been devised with NGOs, universities, and public institutions. Unlike banker Fatih, most in the neighborhood, wish for Haydarpasa to remain a train station, claiming a nostalgic attachment to it. "It is a public building and it should stay so," Samet Büyükovalı, 25, told AA, objecting to claims that the historic building will be privatized. A simit (bagel) seller near Haydarpasa agrees. "If it really needs restoration, then it should be done without harming the historic fabric," he said.