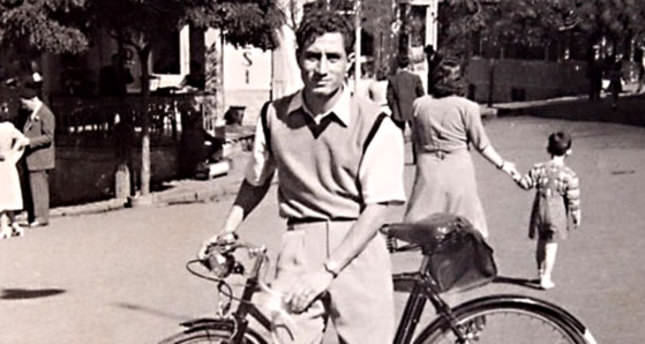 Turkey-born Greek football player Lefter Küçükandonyanis is known as a legend in both Fenerbahçe football club and the history of Turkish football. Shuttling between Athens and Istanbul, Lefter was loved by both the Greek and Turkish people

Son of a fisherman from the Greek Orthodox community in Turkey, Lefter Küçükandoyadis's life story is a triumph gained by the way of the popularity of football. He lived both in amateur and professional football leagues. He was a football player for 27 years from 1942 until 1969. He won many titles with Fenerbahçe including the Turkish National League Championship, Istanbul League Championship, Prime Minister's Cup and Atatürk Cup. He scored 423 goals in a total 615 matches. He won the Top Scorer title several times in both leagues he played in. Besides, he scored 22 goals with the Turkish football team, which he played for 50 times in total. He has been remembered among other legends of Turkish football like Metin Oktay of Galatasaray and Baba (Father) Hakkı of Beşiktaş. His nickname was "Professor" owing to his intelligent playing and scoring.

Lefter Küçükandonyadis (Lefteris Antoniadis according to his birth certificate) was born on Dec. 22, 1925 on Hamam Street in Büyükada (Prinkipos in Greek), one of the Prince's Islands in the Marmara Sea, which are very close to the Anatolian shore of Istanbul. Küçükandonyadis has been referred to as Lefter or "Professor" since Turkish football players have always been remembered by either their first names or nicknames.
Lefter's parents were poor and humble people. His father Christofis was a Greek fisherman while his mother Argyro was a tailor. They had immigrated to Istanbul from Ottoman Albania in the early 20th century. The family was very crowded as Lefter had ten brothers and sisters of which Lefter was the second oldest son.

Just two years before Lefter was born, Turkey and Greece agreed on the population exchange where the Turkish Greek and Greek Turks were reciprocally traded.In the Lausanne Conference the two states signed the Convention Concerning the Exchange of Greek and Turkish Populations.The majority of Greek families in Turkey were sent to Greece.

This should have affected Lefter and his family deeply though he never showed any willingness to make a public conversation on political matters including the big population exchange. The fact was that very few Greeks stayed in Turkey and they became a very small minority compared their levels before the population exchange.

Despite this, they always kept their ties with their relatives in Greece and Lefter himself was living between Istanbul and Athens. Once he was hospitalized due to bad health as he was visiting Athens and Turkish people and especially Fenerbahçe President Aziz Yıldırım and some politicians showed great interest in Lefter's situation, eventually sending a plane to bring him to Istanbul. This was a concrete indication of how much he was loved in both Turkey and Greece.

First steps to the green field

Lefter loved football and started his amateur career on his home island of Büyükada. His first professional team was Taksim Spor, a football club in the Pera district of Istanbul and was only 16-yearsold when he played for them. There is an interesting story about the beginning of his football career - in order to get the legal football player license for Lefter, Taksim Spor had his age increased to 18 by court decision.
Lefter played in 29 matches in two years for Taksim Spor and scored nine goals. In 1943 he left for military duty and since World War II was ongoing, Lefter served for four years just like his peers.

His transfer to Fenerbahçe from Taksim is another interesting story. When Lefter was serving the last days of his military duty in Diyarbakır province in southeastern Turkey, Fenerbahçe manager Rüştü Dağlaroğlu went to Diyarbakır and brought Lefter to Istanbul for Fenerbahçe.The man who told Dağlaroğlu about Lefter was the president of the Beyoğlu Football Club who was himself a fan of Fenerbahçe.

Lefter started training sessions with the Fenerbahçe B Team under instructions of Ignace Molnar, the Hungarian coach of Fenerbahçe. Lefter scored four goals for the B team in a match against the A team. Everybody was happy and they were thinking that they picked up a great talent. Yet, when they looked around to share their cheers with Lefter he did not show up. Reality was that Lefter was ashamed of scoring four goals against the A team of Fenerbahçe and left the game for home. He was a shy and humble person in later years, too, despite the great legend surrounding his name.

Lefter played four years in Fenerbahçe before he left for ACF Fiorentina of Italy with a TL 17,500 transfer fee, which was a huge amount in Turkey at that time. He wore the Fiorentina jersey from 1951 to 1952 and played in 30 matches and scored four goals. He was loaned to Nice the later season and scored two goals in 12 matches.

Though we cannot see the European career of Lefter as a triumph, being transferred by an Italian club then was itself a great success for a Turkish football player.

Lefter turned back to Fenerbahçe, which would be his second home. Fenerbahçe - or Fener for short as Fenerbahçe fans like to call their team - created Lefter, and Lefter helped much to create Fener in the modern professional football arena.Fenerbahçe fans cheered like this: "Ver Lefter'e yaz deftere," which means, "Pass the ball to Lefter and somehow he will score." Lefter played 17 seasons for Fenerbahçe and scored more than 400 goals, which has been a great challenge to meet for the stars of Fenerbahçe so far. He is seen as one the three greatest stars of the club along with Alex de Souza and Rıdvan Dilmen.

The 1950s were times of glory for both Fenerbahçe and Lefter. He became the top scorer in the 1953-1954 season. He was on the roster of the Turkish football team that joined the 1954 World Cup.He played three games and scored two goals in the World Cup. His goal scored from 30 meters against South Korea was engraved to the memory of football fans.

Turkish Football Federation awarded Lefter the Gold Honor Medal after his 50th match with the national team. He scored 22 goals for the national team and was the top scorer for Turkey until it was captured by Hakan Şükür 39 years later.

After the Golden Age

Lefter won seven championships and two cups with Fenerbahçe before he retired in 1964. He played for AEK Athens of Greece for a single season after retirement, yet he was injured and left his football career.

He coached several teams in Turkey and Greece for some years and wrote columns in Turkish newspapers as a football commentator. In 2009, Fenerbahçe Sports Club put a statue of Lefter Küçükandonyadis in Kuşdili Park in Kadıköy, Istanbul next to the Şükrü Saracoğlu Stadium, home of Fenerbahçe.

Lefter lived in Büyükada, his home district until he died in 2012. A great crowd of fans showed up to his funeral while his coffin was wrapped with the two flags he carried with honor and love in his lifetime - the Turkish national flag and the flag of Fenerbahçe. Lefter once said, "I did not carry the Fenerbahçe jersey on my body, I carried it over my head."