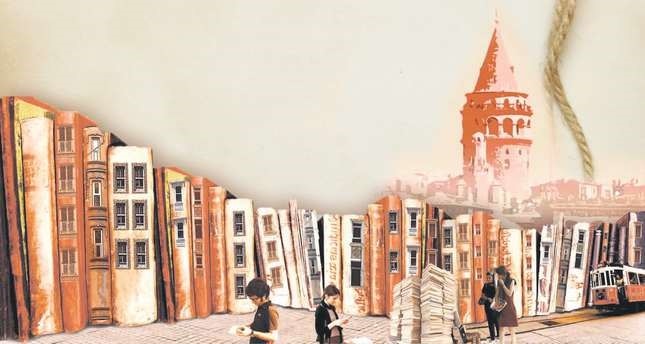 The eighth annual Beyoğlu Sahaf Festival commenced on Sept. 17 and will run until Oct. 7. To experience one of Istanbul's oldest trades of peddling secondhand books and find unique treasures of a literary persuasion, pay a visit to this festival

The eighth annual Beyoğlu Sahaf Festival, which will feature stands set up by bibliopoles and secondhand booksellers, commenced on Sept. 17 and will run until Oct. 7. To experience one of Istanbul's oldest trades of peddling secondhand books and find unique treasures of a literary persuasion, pay a visit to this very special annual bibliopole festival.

Organized by the Sahaflar Derneği (Bibliopoles Association) and the Beyoğlu Municipality, this year's festival will have stands set up by 80 bibliopoles selling century-old books, historical journals, old photos, movie posters, letters, postcards, comics and vinyl, to name a few of the wide variety of antiquarian treasures you might discover.

Held in front of the Turkish Radio and Television Corporation (TRT) building in Tepebaşı, this open-air festival offers the perfect opportunity to experience the nostalgia of autumn as you pick out good reads in many different languages and sight rare findings. Admission is free, and visiting hours will be daily from 11:00 a.m. to 10:00 p.m. The opening for the festival, which will run until Oct. 7, was held on Wednesday with the participation of Beyoğlu Mayor Ahmet Misbah Demircan, who himself purchased a 1927 first edition of Atatürk's "Nutuk" in Ottoman, for TL 450 in an auction held to collect funds to purchase s cho ol materials for needy children. I had the opportunity to speak with Sahaflar Association General Secretary and Vice President Tolga Gürocak, who said that there are over 500,000 books on display and that they have tried to find books on every topic imaginable. "Every single booklover will definitely be able to find something to their taste, whether it be books, periodicals or even old records. There are at least 1,000 old records as well as film posters and even Ottoman maps," said Tolga, adding that in addition to a wide selection of books in English, there are also books in languages from all over the world, including, but certainly not limited to, French, German, Italian, Swedish, Hebrew, Persian, Arabic and even Ottoman.

Although this is the Beyoğlu Sahaf Festival, stands have been set up by 80 bibliopoles from all over the city as well as by four that have come all the way from Ankara and even one from Kocaeli. There will also be a number of readings and talks held on the sidelines of the festival, which continues to grow in popularity. Tolga indicated that this draw is due to both its promotion in the media and as a result of what he said should be perceived as a reflection of the community's socioeconomic standing. "As the socio-economy continues to improve, so does the interest in both antiques and antiquarian books," said Tolga.

Referring to the Sahaflar trade, Tolga says it is a very important corridor connecting the Turkey of today with that of Ottoman times, adding that during the Ottoman era, there was even the title of Sahaflar Şeyhi (Bibliopole Sheikh) who was elected to take on the duty of resolving all disputes between booksellers and the handling of state department procedures. Rooted in history, Sahaf, an Arabic word, is the name for either the shop or person buying and selling old books, documents and other print-based collectibles. Sahaflar, or secondhand book shops, are amongst the oldest professions alive in Turkey, and the Sahaflar Book Market (Sahaflar Çarşısı), situated in a courtyard canopied with leaves between the Beyazıt Mosque and the Sedefçiler Gate of the Grand Bazaar, is perhaps the best example of this, as its history reaches back to the 15th century.

There is also a fixed bust of İbrahim Müteferrika (1674-1745), the first Ottoman publisher and printer, in the center of the market square, which was once a gathering spot for prominent poets, academics and authors in the mid-20th century. But to go back even further, Evliya Çelebi, the famous Ottoman traveler of the 17th century, wrote in his book of travels "Seyahatname" that there were 50 bookstores and 300 antiquarian booksellers serving scholars at the time. Now, there are 23 bookstores that sell both used and new Turkish and foreign books, novels, holy literature, textbooks and calligraphy materials - just to name a few of the intriguing finds this historical book center has to offer.

There are two other secondhand book strongholds on the European and Asian sides of the city worth wiling away a day in. Off of Beyoğlu's popular İstiklal Caddesi on Meşrutiyet Caddesi No. 18, a street across from Galatasaray High School, is Aslıhan Pasajı, a two-storey arcade devoted entirely to secondhand books, comics and other print collectables. On the Asian side of the city is the Kafkas Pasajı, located at No. 37 on the Bahariye pedestrian shopping strip in bustling Kadıköy.
Last Update: Sep 18, 2017 3:56 pm
RELATED TOPICS