Museum displays unique examples for those interested in Thracian culture 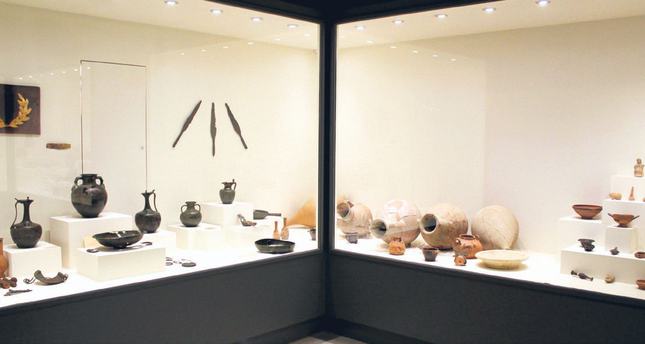 by AA Sep 22, 2014 12:00 am
Thracian tools, tombs and various artifacts were unearthed during excavations in Tekirdag, which hosted many civilizations throughout history. Artifacts belonging to the Thracians are on display at the Tekirdag Archaeology and Ethnography Museum, offering a historical journey to visitors. Museum Manager Önder Öztürk, in his remarks to an Anadolu Agency (AA) reporter, said artifacts discovered in archaeological sites and settlements in Tekirdag are showcased in the Tekirdag Archaeology and Ethnography Museum, which was founded in 1967.
He added that historical artifacts belonging to Thracians give important clues about the civilization.

Among the many archaeological findings that are on display at the museum, the skeleton of Thracian King Cersobleptes draws the greatest attention. Sculptures, tumulus, a cup of the mother goddess, metallic statues, spearheads, knickknacks and coins that were unearthed in Marmara Ereglisi, Karaevli, Barbaros and Kermeyan districts are also showcased in the museum's garden. Since the garden of the museum is big enough, large tombs, gravestones, grave columns and monuments are also placed outside on display.

Officials are trying to make a Thracian city, located under the Basilica of Perinthos in Karaevli village of Tekirdag, a historical site. When all the necessary adjustments are finished, the route between Marmara Ereglisi and the Tekirdag Museum will give a clearer idea about the history of the Ertugrul neighborhood for tourists.

Moreover, Öztürk said that although Tekirdag is a big city, the number of visitors to the museum is not high enough. "We are preparing projects to increase the number," said Öztürk and added when the restoration of "Tekirdag houses" is complete, the number will automatically increase. He said that the museum couldn't host large groups of visitors since big vehicles are not able to come to the museum.