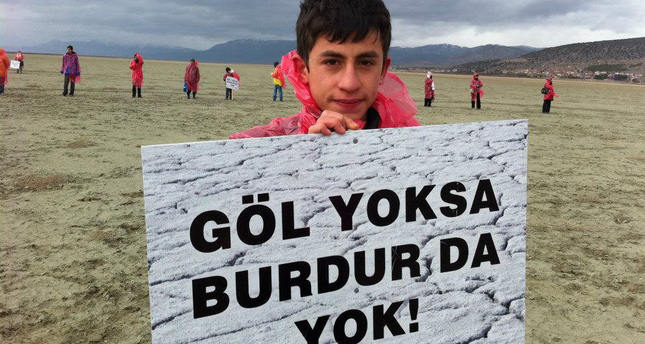 by Anadolu Agency Oct 02, 2014 12:00 am
Concerts, dance and music performances recently took place at the Lisinia Nature Project as part of the "Mourning for the Lake" festival that was held to draw attention to the draught affecting Lake Burdur. Organized by the Burdur Nature Project, the film crew of the "Mourning for the Lake" documentary and the Let's Give Life to the Lake Association, the festival commenced with the release of birds, which had been injured, but were nursed back to health.

Later, Dutch composer Rokus De Groot's composition for Lake Burdur was performed following a joint concert of reed performer Ferhat Erdem and harpist Çağatay Akyol. Karsu Dönmez also performed famous folk songs on the piano. Photographer Taner Yılmaz showcased an exhibition that was composed of photographs of the region around Lake Burdur, and national athlete Kemal Özdemir made an appearance to support the Lake renewal efforts. Veterinarian Öztürk Sarıca, the founder of the Lisinia Wild Life Protection and Rehabilitation Center, said they are constantly working for the protection of the lake. He added their aim is to secure the health of the world and future generations. As a part of the festival, the participants attended "water fast," where participants were asked not to use or consume water from 3:00 p.m. to 7:00 p.m. on the first day. "We thought it would be a small gathering to draw attention to the problem. The draught [affecting] Lake Burdur indicates that our water sources and underground water are doomed to dry [up]," Sarıca said.

Surpassing the organizers expectations, water fast for Lake Burdur received much support in Turkey as well as around the world. People who could not attend the festival shared videos and words of encouragement to show their support. In response, Turkey's Ministry of Environment and Urban Planning has recently announced that they will start a lake rehabilitation program for Lake Burdur, and the ministry said they will conduct meetings on the subject as soon as possible. Also, director Şafak Türkel said they are working to stop the draught affecting Lake Burdur by engaging with both national and international platforms. He thanked artists who supported water fast and emphasized that they will keep on fighting to save the lake.

Water fast occurred on the first day of the festival in Burdur while the second and the last day took place at the Burdur Municipality Beach. After the water fast, hundreds of nature lovers who came to the beach poured water into the lake from plastic bottles accompanied by slogans "Do not let Lake Burdur [run] dry." Sarıca said that water fast became a symbol as people from all around the world are performing the fast in order to draw attention to drought in the wetlands. "Water fast has become the symbol of support and resistance," he added.