Top Tavla tips for expats to play like a Turk 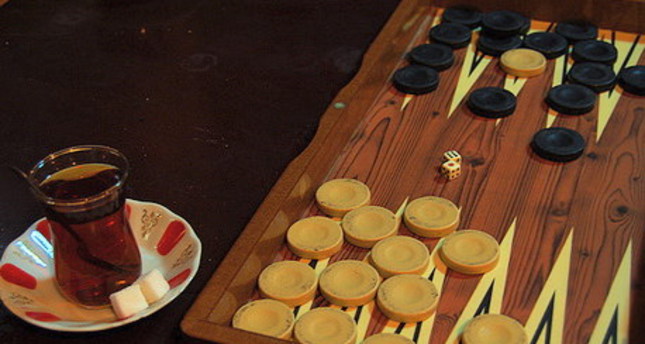 Learn how to play the oldest board game in the world just like a Turk. Backgammon, known as tavla, is a serious passtime for most Turks

Tavla, otherwise known as backgammon, can easily be considered Turkey's national game and, in the way it is played a metaphor for life in Turkey. It is a game of acquired skill and luck as you never know what the dice is going to roll. Playing tavla with a Turk offers a truly authentic peek into Turkish culture and with the following tips you too can play like a Turkish pro.

Anyone who has ever been to Turkey should truly be well aware that tavla, or backgammon in English, is quite possibly the country's most well-loved game. It is the oldest board game in the world with a history dating back thousands of years. What was once upon a time played on wood surfaces using stones as markers, these days a tavla board is a staple not only in tea gardens and nargile cafes, but can also be found in every home and in most local shops. It is a usual practice to set up a table or hold the board on ones knees in front of a shop where visitors who sit down for tea can also try their hand at a game with local vendors. It is also not unusual to see others joining in as spectators offering their insight into the moves the dice allow. Practically every Turk knows how to play the game, a knowledge seemingly inherent from birth. However, for us expats, there are a number of intricate details best to get under your belt before you tackle playing tavla with a Turk.

First of all, Turks seem to have a whole different language when it comes to tavla. Don't be surprised to suddenly hear your opponent spout off the combination of numbers rolled by the dice in Farsi. For many Turks, the numbers 1 through 6 are the only Persian words they know. For example, the most favored roll, which is a double sixes, will be called out as "düşeş," Persian for two sixes. "Gele," is what is said when the dice rolled produces no moves and "hadi yavrum kemik," which means "come on baby bones" is uttered as one rolls the dice for a good combination. My personal favorite is the "Zeki Müren kapısı," which is the 6-4 combination roll that creates a door. Knowing this game jargon will make you a pro.

Tavla is quite a talkative game as each player vocally deliberates the consequences of each impending move. Those who are closer acquaintances may poke fun at one another and even go so far as to insult or intimidate. Basically, the rule is the closer you are the more verbally assertive you can be at taking shots at one another. Although it is widely acceptable for two strangers to sit down to a game, it is always best to test the waters with your new opponent before embarking on demoralizing heckling. There is a lot of backtalk from spectators as well as it is a regular practice for a crowd to form around a tavla board with everyone spouting out advice to the player that has rolled. Truth be told, it's quite a cathartic experience to freely insult and degrade your opponent in jest in a manner you would never in a million years act in any other setting.

Although there are no time limits set in tavla, the game is played at a lightning pace. Speed is a serious issue and being fast to make a move and roll is a major part of the game. The faster you are the more skilled you are considered to be. Turks instantly count in their head where their next roll will take them and actually counting with the pieces is considered a big no-no. Instead, you are expected to smack the checker down straight into its final slot. Mulling over a move could very well solicit catcalls as well-seasoned players become frustrated if their speed is not met by their opponent. Many times players will boast that they are too good to play with a prospective opponent. However, it is all in good fun as the game is played to entertain and socialize. It never gets really heated and losses are taken lightheartedly. If you are the winner then you are generally challenged to a game by a new opponent. And if you lose, the tradition is to put the closed up board game under your arm as you are told to "oğren de gel," which literally means, "go learn how to play and come back."

Unlike its Western counterpart, in tavla, the dice, which are tiny, are rolled by hand and there is no such thing as an illegal dice roll. The rule is if it lands upright on the board, then it counts. Once a piece is moved and the player raises their hand from it, the move is considered final. In general, a match is played until the first player reaches five wins, but sometimes games are played up to three or even seven wins.

Although there is a wide variety of beautiful tavla sets for sale in the Grand Bazaar, many of them inlaid with mother-of-pearl, it is the classic and simple wooden backgammon set that is the most coveted. The wood provides the perfect and necessary acoustics for the true Turkish tavla experience as smacking down the checkers on the board is all par for the course. Visit Tahtakale's strip of game shops to find the original wooden board and make sure to purchase an extra set of dice, as they are so small they are easily lost in any reckless roll.

Try your hand at this interactive physical board game, which in this computer age is a dying breed, for a chance to meet locals and become truly integrated into Turkish culture. Any tea garden or coffeehouse will always have tavla, or enjoy rolling the dice with a nargile in Tophane or under the Galata Bridge.