From solution to pollution: Landfill 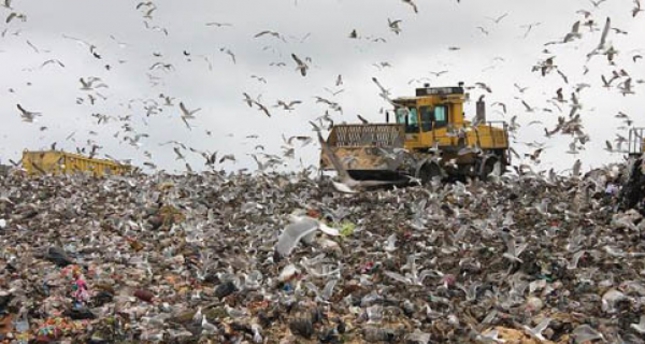 by İlknur Temizel Oct 23, 2014 12:00 am
Municipal solid waste landfills are large areas of land or an excavated site that are specifically designed to receive our waste. In a landfill, you can find items such as newspapers, books, magazines, packaging, food scraps, plastic containers, yard trimmings and typical waste from residential, commercial and industrial sources.

Although carbon dioxide is often cited as the leading cause of the greenhouse effect on the atmosphere, methane is actually 20 times more effective than carbon dioxide at trapping heat from the sun. Inside of the landfill, rotting organic matter pro duces methane. Also, household cleaners can react inside of the landfill and pollute the air as well as the water. Another threat is toxic gases, which can be formed by mixture of chemicals like bleach and ammonia that have been deposited into landfills. Additionally, dust and other forms of non-chemical contaminants can be released into the atmosphere.

Aside from problems caused by solid wastes, liquid waste, called leachate, also poses environmental risks. Leachate can be treated and re-circulated, but if untreated, it can seep into surrounding groundwater. Even if the landfill is constructed to protect humans, animals and plants from toxins, the natural deterioration of the protective barriers around the landfill is inevitable.

In early July 2014, there was an explosion in the municipal solid waste landfill located in Muğla.

The reason given for the explosion was meth ane gas being ignited by heat from the sun. The most flammable gas commonly produced by landfills is methane, which is highly combustible.

This combustible gas and the shear amount of waste can easily ignite a fire. Another problem with landfills is related to decomposition over time. When the landfill reaches full capacity, it is covered with earth, seeded with grass and transformed into recreational areas. However, gasses are still emitted from the decomposing waste, as it can take years for all of the organic material to decompose. According to the statistics from the Environment and Urbanization Ministry, 76 municipal solid waste landfills serve 46.5 million people. Therefore, to reduce the harmful effects of landfills, experts strongly recommend recycling as much as possible. We also need to develop our capacities for harnessing landfills for energy. Currently, of the 76 landfills in Turkey, 16 produce electricity. It is up to us to help create a greener Turkey, and monitoring landfills as well as how we contribute to them is a great place to start.