The City of Eternity a guide to a 7,000 year-old history 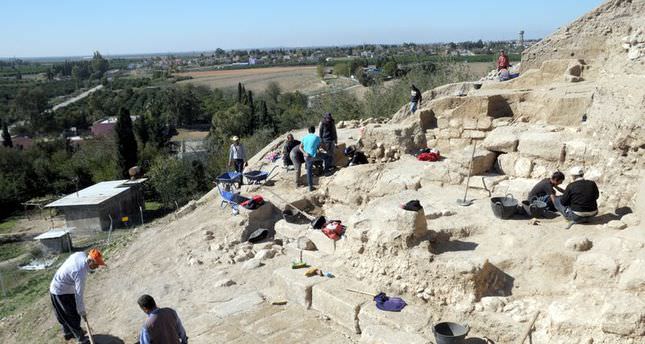 by AA
Nov 09, 2014 12:00 am
Known as the city of eternity, the ancient Roman-era settlement of Mopsuestia sheds light on the history of Çukurova with its 7,000-year-old history.

Excavations in the city are currently being carried out under the leadership of the Adana Museum with the approval of the Culture and Tourism Ministry under the auspices of the project, City of Eternity: Mopsuestia, by Yüreğir Municipality. A consortium composed of Professor Anna Lucia D'Agata of the National Research Council, the Institute for Ancient Mediterranean Studies and Professor Giovanni Salmeri of the University of Pisa are actively taking part in the excavations.

The ancient city, located 27 kilometers east of the Ceyhan River on the historic Silk Road, was among the most important Roman cities of its time. So far, castle walls, a stadium, an inn, a theatre and similar buildings have been unearthed during the excavations. Buildings that have been excavated as well as those under the earth include an ancient stone bridge, city walls, aqueduct, the stadium, mosaics, the theatre, public baths and ancient rock-cut tombs located to the north of the city. The Havraniye Inn, which is mostly destroyed, makes Mopsuestia a very important historical site. Salmeri, speaking to Anadolu Agency, said that a team of experts from Italy are currently carrying out the excavation in the ancient city. He underlined that Mopsuestia's history goes back thousands of years and that they have discovered remains from the Neolithic and Chalcolithic periods along with the early Hattie, Roman and Byzantine eras. He noted that the excavations in the ancient city are very crucial and said, "History and people live together here." He added that they are planning to open the site for visitation as a culture and archeology park within three years.

Archeologists are also trying to determine the history of the region by using the remains that have been unveiled. "We found pieces that belong to the Neolithic period in the mound," Salmeri stated. According to analyses which were carried out seven years ago, the pieces were determined to be 7,000 years old. It is reported that the ancient city was home to many civilizations throughout its 7,000 year old history. Moreover, the ancient city is also featured in many folk stories. Reportedly, Luqman the Wise, a legendary folk figure, dropped the elixir of life while passing over the bridge of Mopsuestia.

In collaboration with Turkey's Environment and Urban Development Ministry, this project aims to stop unlicensed constructions near the ancient city and introduce Mopsuestia to the tourism industry. When the project is finalized, the locals residing in unlicensed buildings will move to a new agricultural village, where they can purchase houses with low-cost installments. The ministry will also help locals to integrate themselves into their new social life. Furthermore, the Food, Agriculture and Livestock Ministry will offer incentives to continue agriculture and livestock work under better conditions in the region with further employment opportunities.